Revenge Of The Ghost Of Christopher Reeve

Before getting into today's mischief, some links for you. My partner in crime Norma wrote yesterday about Father's Day at her blog. She can also be found getting interviewed at Leanna Harrow's blog. As well, have a peek at our joint blog for a musical interlude involving the symphony...

Now then, to today, a film review, and I'd better keep my eyes out for any cranky ghosts who once wore a red and blue leotard and cape ensemble... 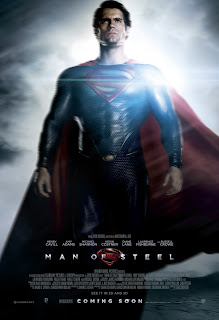 Man Of Steel brings Superman (aka The Boy Scout) back to the theatres in a new and different way, in a film directed by Zack Snyder (300, Watchmen), and fortunately influenced by producer Christopher Nolan and writer David S. Goyer (both from the Dark Knight trilogy). It's the latest comic book adaptation to hit the big screen, and a return to form for the big blue and red Boy Scout and his place in the DC universe.

Things start out on the dying sci-fi world of Krypton, where we meet Jor-El (Russell Crowe) and his wife Lara (Ayelet Zurer), who have secretly conceived a son, Kal-El. Jor-El is a scientist, and he and the soldier Zod (Michael Shannon) have been struggling in vain to protect the population of their world from the doom yet to come. When Jor-El and Lara send their infant son off the planet (along with a codex preserving the record and heritage of Krypton and their best wishes), Zod intervenes, murdering Jor-El and getting banished to the Phantom Zone, along with his followers. 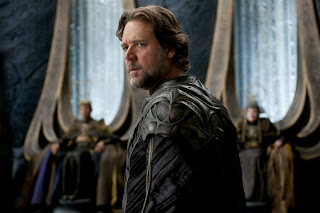 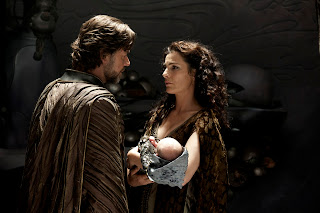 We meet Kal-El on Earth, now going by by the name Clark Kent (Henry Cavill), as well as the rest of the cast. Jonathan and Martha Kent (Kevin Costner and Diane Lane), his adoptive parents, trying to shield him from a world that can't understand him. Lois Lane (Amy Adams), the ambitious reporter seeking out fragments of stories of a man who can do the impossible. Her editor Perry White (Laurence Fishburne), as gruff as we could expect out of the character. And in time comes the threat from the past, as Zod and his followers reach Earth, determined to recreate Krypton... despite the presence of the locals.

Snyder wouldn't have been my first choice for a director; the portions of Watchmen that I've seen left me rolling my eyes, and I despised 300. Still, he manages reasonably well with this film; I chalk that up to the influence of Christopher Nolan, who transcended the comic book genre when he directed his Batman trilogy. This film has a sombre, introspective feel to its lead character; if you're expecting a big dimpled smile out of the Boy Scout, you might have to go seeking out an earlier film. Nolan and Goyer's story works around with the mythology of the character, taking us in some different directions (and wisely-and finally- does away with the red underwear on the outside look once and for all). Rather than give us another Boy Scout story (how many times can one save a cat from a tree, after all?), this is a sci-fi kind of story, one that leans towards the majestic qualities of the character. All while giving us someone who's rooted in his humanity; the cornerstone relationship in his life is that he has with his adoptive parents, who shape him into the kind of man he becomes. 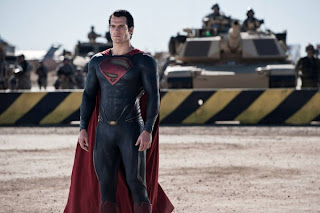 The costume looks right; instead of spandex, it has a look that lends itself well to the screen, and maintains just enough of the comic book version while looking respectable. This extends to Zod and his followers; their look has a military and martial quality to it, a uniform instead of a costume. And that extends to Krypton itself, in the production values brought through by special effects and set design: the planet looks familiar... and yet not, a contradictory world of both splendour and dark, sinister undertones. The special effects take hold again when we come to Earth, where Clark's abilities can lead him to accomplish feats of strength and speed, to fly; this gets conveyed rather well, actually. The abilities of Kryptonians that take up much of the second half of the movie (along with the accompanying destruction) are on display across the screen, in a way that worked at least for my eyes- though I do find the camera tricks, occasional shaky cams, and editing somewhat bothersome at times, but that's a larger problem in action films these days. And the epic score by Hans Zimmer fits the movie well, heading off in a different direction from the familiar John Williams themes. 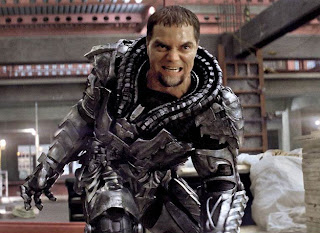 Casting is key for the film. Michael Shannon is one of those actors who keeps getting good parts in film and television, and excelling at what he does. I first noticed him in World Trade Center, and recently he's been getting acclaim for his role as a hitman in a film called The Iceman. His take on Zod is interesting; this is the same character Terrence Stamp once played, but the two actors approach the character in different ways. Shannon plays Zod as a villain by circumstances; his zeal to protect his people drives him over the line. Shannon is one of those actors who reminds me of Gene Hackman, utterly compelling to watch no matter what the role. We get what drives him, even if it drives him to do the unthinkable. 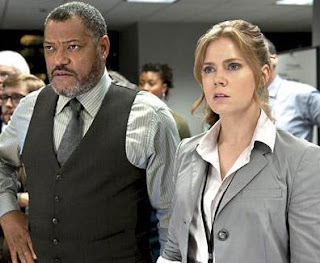 Laurence Fishburne has a good take as the grouchy boss at the Daily Planet. The character must by nature be something of a curmudgeon, but a fiercely principled one. Fishburne, who's perhaps best known for leading a slightly dazed Keanu Reeves down a proverbial rabbit hole in three Matrix films, conveys both of these qualities in the character. The character and the Planet itself are somewhat sidelined this time out though; I might have liked to see Fishburne cast instead in Christopher Meloni's place, as that actor gets a lot to do.

Then there's the matter of the two sets of parents for the hero. Russell Crowe and Ayelet Zurer are sympathetic as the first set, trying to save their child from the destruction of a world that should have known better. Crowe conveys the nobility of the character, while Zurer (Angels and Demons) draws on the empathy of the audience as a mother knowing what is to come. 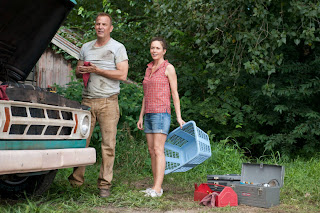 It's the Kents who spoke more to me as characters. In the comics, Jonathan and Martha do more than anyone to shape the kind of man their son becomes; it's because of them that he's an inherently decent man. Costner is a good father who worries about his son, cautioning him to conceal what he's capable of doing, warning him that people will fear him if they know what he is. Diane Lane is a bit less of a presence, but both characters have that central decency to them, the essential elements of integrity that shape their son. And they actually come across feeling like farmers... not like a Hollywoodized form of farmers.

Amy Adams gives us something of an extrovert as Lois Lane. The film slowly builds a connection between she and Clark, enough to give us a sense of where they might go, but not quite what we'd expect. She's tough, ambitious, and driven, but in an odd way, not as developed as she could be. We shall see in the inevitable sequel where that goes. 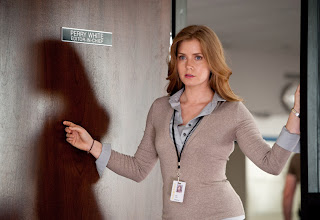 It's the lead that is a core to the film. Henry Cavill has come a long way from his first film appearance, playing Albert in The Count of Monte Cristo. He's done a good deal of film and television work since, most recently in Immortals (which I avoided due to an aversion to the brain damaged mumbling Mickey Rourke). He certainly looks the part of Superman (abs and all), and he plays the character as alienated, brooding, and with depth. This is a man who feels out of place in the world, who has spent years as a nomad, hiding in the shadows, doing a quick save here and there and then fading back into the woodwork. He is most certainly not the smiling Golly Miss Lane version we would have expected from the late Christopher Reeve, but he doesn't have to be. Instead of the Boy Scout, we get someone who's more interesting, and who carries himself with confidence. 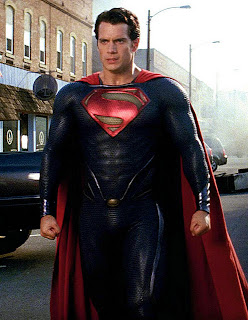 This is a very different take on Superman, a story that shifts around some of the core mythology, moves back and forth in time- this does have a way of arresting momentum, though, when a flashback shows itself. There are times in the second half- particularly in terms of hand held camera shots, something that I've never liked- that the audience might feel a sense of dizziness. That's what you get for essentially a long-running battle in a film. Man of Steel is bleak at times, lacking the lightness or fun of earlier adaptations, but centering itself in the majestic qualities of the character, and the basic humanity of a man who's not quite human. It succeeds, because it makes us want to see more. 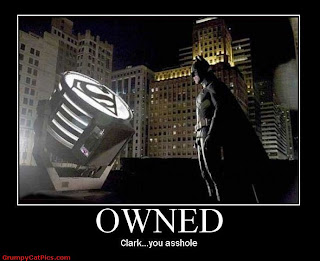 Posted by William Kendall at 6:46 PM