The Pollyanna Plan: Always Look On The Bright Side Of Life

Today we have ourselves a book review at hand, for The Pollyanna Plan, by Talli Roland... 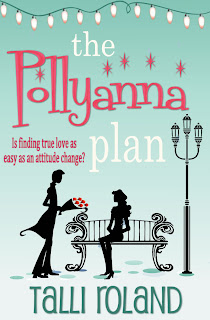 Every once in awhile life throws us for a loop. The Pollyanna Plan starts off with its heroine getting thrown twice. Emma Beckett is a sensible underwriter in London, living her life in what she considers to be realistic expectations. Emma is strictly no-nonsense in her approach to life. She has a relationship with a boring fellow named George and a strained family life with her mother, in place following the death of her father. In short order though, Emma loses both the boring boyfriend and the job when she gets downsized. Her free spirit best friend Alice persuades her to start looking at life more postively, like the character Pollyanna, to find something optimistic in everything. Emma dives into the experience, which draws her to a karaoke evening with Alice.

The other half of the equation is Will Ballard, who's spending his time working at a home decorating store, though he in fact comes from a well to do family with a paint business. Will has retreated from the world, for the most part, dealing with a medical diagnosis that's changed his life. There's friction between he and his father, over his refusal to take the reins of the company. Will feels a sense of safety in isolation, not wanting the pity that will come with people knowing about his condition.

The pair meet when Emma comes to Will's shop looking for paint, and then when they turn up at the same karaoke establishment. There's a spark between them, definite chemistry from the start, and the story follows them both as they work through issues with family, and with their own wariness about trusting in love.

Talli Roland is a transplanted Canadian living in England, and she's obviously soaked in the British way of life. The dialogue and atmosphere of the book has a very British sensibility. It feels British, in other words. She has a talent for picking up on details, telling us a lot about a person from the way their home looks, or the way they pay attention to the world around them. She weaves these details, large and small, to give the reader a very strong sense of the world she's writing in. Much of that, of course, is in and around London, but even on a trip to Croatia, she makes the reader strongly see the place she's bringing a character to. Sometimes the detail is less tangible, but still very effective. A small moment that I enjoyed particularly demonstrates that, and it's a nod towards personality traits: Emma is spending time with her sister Meg, a child, and is struck by the fact that she doesn't know how to talk with kids.

The author has a light, deft, and funny style of writing, and it comes across in the sharp, clever dialogue a lot, and in characterization, which feels like the solid bedrock of her writing. Her characters feel grounded and real, like the sort of person you might meet in the park or at a pub. Alice is the funniest character of the lot, a firecracker sort of person who nonetheless has depth beneath the cheery and irreverent personality she shows the world. She has something of a mirror in Lou, Will's neighbour, who's a loyal and outspoken sort of person, watchful and still likely to say something off colour. Emma's ex George comes across, to use a Britishism, as a boring self involved prat, but that's what makes him work. We've all known a George in our life, if not more, and while the author doesn't employ such a technique, we've all been tempted to push a George into the Thames. When we meet Emma's mother for the first time, knowing she's remarried and has another daughter, we expect one thing to happen, and instead the author takes us in a different direction, and we end up understanding, just as Emma does, what her mother has felt in the aftermath of the death of Emma's father.

The two leading characters are of course the core of the book. Emma is a smart, likeable woman, torn between what's safe and realistic for her on the one hand, and hope and optimism on the other. She has to figure these things out for herself as she goes along, wavering between looking on the bright side of life and just going back to being cynical about life. She has a sense of humour, and the reader can really empathize with her. Her character voice is very distinctive, and true to life. Will feels just as real as Emma does. Coping with a medical diagnosis that's difficult, he's been burned before in love, wants to pull back away from the world, instead of dealing with it. There is a warm, playful chemistry between these two, and that's all to the credit of the writer. As the two characters embark on this journey through the book, the reader can't help but root for them.

The novel has a brisk pace to it, clever banter, and strongly rendered characters who feel true to life. Talli has a winner with this book, and you'll enjoy reading it.

You can find The Pollyanna Plan and Talli's other books through Amazon.com or Amazon.UK. And you can find her at her blog, Talli Roland, as well as at Facebook.. She lives in London, with her husband and their new son, affectionately nicknamed Lobster Baby.

Posted by William Kendall at 6:45 PM