G'Day, Mate, Welcome To Australia. Watch Out For The Snakes

"I mean, we've got a couple hundred kinds of snakes here in Australia, and all but one of them are venomous. And the one that's not will eat you whole. Then there are all those lizards and creepy crawlies. The thorny devil will just glare at you the wrong way and you'll fall dead. Oh, and by the way, check your shoes before you put them on. The spiders round here get pretty big, and they like to surprise people. And deadly. Did I mention how deadly they are? Well, of course they are, this is Australia. Everything's out to kill you, mate. And when they're not killing you, they're planning ways to kill you. Even the kangaroos are bad tempered if they want to be. Once you've been kicked by a kangaroo, you'll feel that ache for the rest of your life. And koalas? Oh, sure, they look adorable, but they're not that cute when they're ambushing you from the trees. Next on our item list of cautions? Tasmanian devils. Forget everything you think you know from that cartoon. Real Tasmanian devils are much more vicious and a lot smarter. Oh, they're harmless when they're in a good mood, but once they're annoyed, look out, because they'll rip you apart piece by piece. And since they're annoyed even when they're sleeping, it's a pretty nasty bugger to come across. Don't go swimming with the crocs. They might think of you as food. And by might I mean they will think of you as food. And before I forget, watch out for the platypus. They do look strangely cute, but that doesn't mean they're cuddly. They're dangerous. What part of this is Australia did you not seem to get? The platypus will smack you upside the head with that tail of theirs, and steal your wallet while they're at it. Anything else for me to warn or advise about? Oh right. You might want to hire a local to interpret for you, because the dialect gets a little strange. You all would have no idea what I'd be talking about if I mentioned terms like fair dinkum, brumby, or drongo. Let alone having a naughty. Last thing. Any of you who might be entertaining ideas about swimming in Lake Eyre? You might have to wait a few years. Well, welcome to Australia, and try not to get eaten by sharks. It's doing our tourism business no favours at all..." ~ Roland Wallace, Australian tourism official, 2010

Oh, boy... I suspect I'm going to be a dead man Down Under for this one.

Welcome to Australia, and I'm having a bit of image fun today. If you haven't seen it yet, check out our joint blog, where yesterday we did a Without A Word blog, sort of a prelude to today's mischief, with some natural cuteness, eye candy, and a couple of not safe for work pics.

And for those of you who might like IMAX films, I'll direct you over to a link at Youtube, where this link leads you to the full Australia Land Beyond Time film.

For those of you who like photo blogs, I'll offer you these suggestions from Down Under from daily photographers:

As a writer, I'd like to one day write about Australia- though writing in the espionage genre and usually operating out of other areas of the world... Australia is a long way off (by extension, to an Aussie, Europe and North America are a long way off). The only instance of Australia turning up in a spy novel that I can think of offhand is in Tom Clancy's Rainbow Six (the second last good book he wrote before his abilities took a steep dive into the Marianas Trench), where a pivotal moment in the plot takes place during a trip to Sydney.

As a traveller, I'd love to spend a few months there. My aunt and uncle have been over at least on three different occasions, and probably more. They speak very highly of it. I'd love to see this place for myself. Particularly Uluru, the very heart of the continent.

Obviously when travelling, I'll just have to make sure to check my shoes. And not to annoy a koala.

And so with that, I leave you to the pics. I'm going into hiding now. The Australian High Commissioner will want to have a word with me. Enjoy! 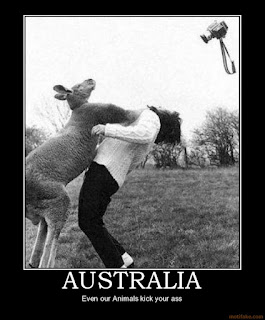 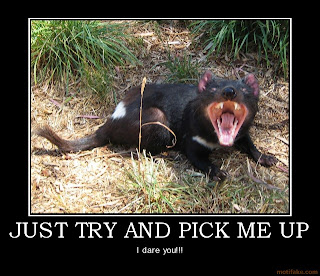 Posted by William Kendall at 6:36 PM