G Is For Global Blackmail 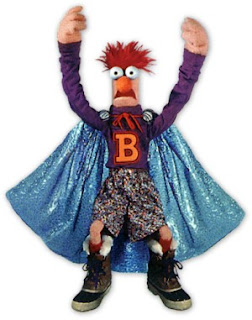 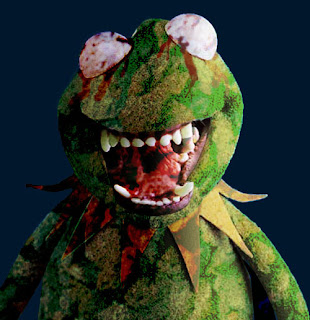 Convicted murderer and muppet Mr. Johnson, aka Fat Blue, aka Fred Johnson, has resurfaced in a stunning video delivered to media and the United Nations today, while remaining on the run somewhere in western Canada. Since his escape several weeks ago after a plane crash, the muppet convicted of murdering Elmo and framing Grover has eluded authorities searching for him.

A video was delivered to the offices of the Calgary Herald today, containing what can best be described as a manifesto. The balding blue muppet looked crazed and devious as he spoke directly to the camera. 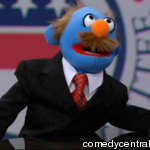 "I, Fred Johnson, wrongly persecuted by the systems of an unjust government, have taken matters into my own hands. I have demands that will be met, or the consequences will be drastic. I've been busy during my enforced run from the law, nations of the world. My demands are simple. You will execute Grover. It's irrelevent that he's innocent. I want him dead. Not only dead, I want that blue bastard drawn and quartered. You have two weeks from today. It will be broadcast across the world. If you refuse, I will unleash my arsenal of death cannons, and destroy the world. Ha ha ha ha ha ha!!  Does my evil laugh sound evil enough? By the way, I really do have death cannons, and they are capable of blowing up the entire planet."
Authorities don't know what to make of the manifesto. The heirs of Jim Henson seemed downcast. Cyrus Henson, a cousin of the late Muppet maker, made a confession. "Look, Jim wasn't merely a puppet master. He was also a wizard first class. He breathed life into these muppets. Sure, they're made of stuffing, but they're sentient living creatures too, and as such, every once in awhile one of them will turn out to be completely evil. Don't hold it against all of them." 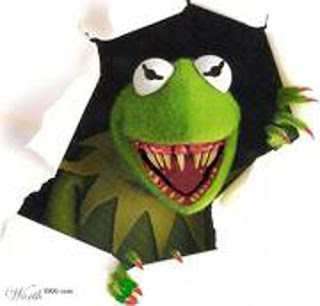 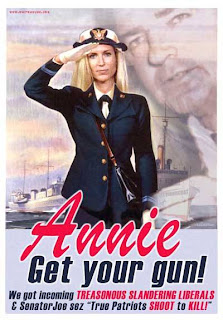 Grover is said to be in protective custody with his girlfriend, so it's impossible to reporters to get comments from the fuzzy blue muppet. Meanwhile, in Canada, the search goes on. RCMP Inspector Lars Ulrich, still heading up the search for the fugitive, was met by reporters, while he was busy beating up a reporter from TMZ.com outside his detachment.

"Look, I haven't got a statement for you," he told the rest as he gave the TMZ reporter a swift kick in the ass.

"Inspector," a reporter with Reuters spoke first. "Do you believe the muppet's threats are real? That he's capable of destroying the planet?"

Ulrich sighed, and threw the TMZ reporter down an embankment. "I can't really comment on that on the record. I'm sure you understand."

A reporter for Access Hollywood ventured forth, eager. "Lars! Lars! Kyvin Summers, Access Hollywood. Tell me, what does Metallica think of the Brangelina situation, and if Jennifer Aniston should get back together with Brad?"

Ulrich stared at the man as if contemplating how easy it would be to sever his head from his neck. Then he spoke softly. "Listen, you ineffectual vermin, I'll say this much. First of all, Jennifer Aniston is a talentless hack who can't act her way out of a paper back. Second, that whole tendency you twits have of combining names into one is really, really annoying. Third, and I want you to listen to this really, really closely. I am not that Lars Ulrich, you idiot!!!!" The inspector sneered in contempt. "Finally, and most importantly, I have real work to do. These real reporters here seem to understand that. What is it about entertainment reporters that make you such dimwitted asses anyway?"

"So is that a no comment on the Brangelina issue?" Summers asked.

The inspector slugged Summers, and returned into the detachment. Somewhere out in the woods, a muppet supervillain waits, a deadline counting down. At the UN, debate rages over the demand made by the villain. And here in High River, entertainment reporters keep getting beaten up. In the opinion of this reporter, they had it coming. 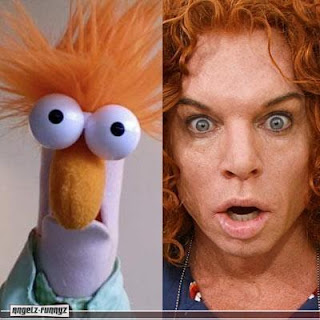 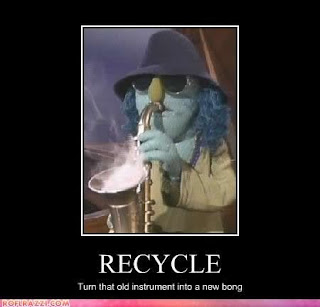 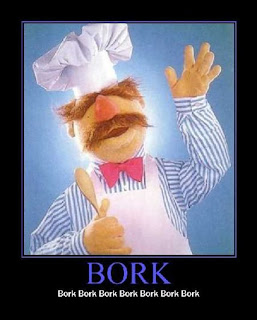 Posted by William Kendall at 4:23 PM