Last Stand Of The Drunken Stupor

I have on numerous previous occasions written from the point of view of Jabba The Ford- aka Mayor Von Drunkenstein, aka Rob Ford, the wife beating crack smoking racist bastard ex-mayor of Toronto. With his recent death, I had considered leaving the matter entirely- aside from a Facebook post bidding him good riddance. The circus that his funeral ended up becoming changed my mind. I won't say this is the end of writing about the thug- considering that his idiot brother is capitalizing on his death for his own political ends. Ghost Drunken Stupor, anyone? 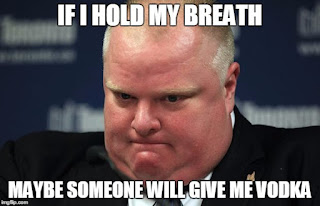 Blithering Idiots Demand Their Idol Be Canonized As A Saint; Brother Takes Advantage

Toronto (CP). The recent death of former Toronto mayor Rob Ford, known internationally as the crack smoking drunken stupor clown, has left a city divided between those who have a grasp of reality and the remaining members of what has been called Ford Nation, a gang of drunken dolts making excuses for a despicable man. 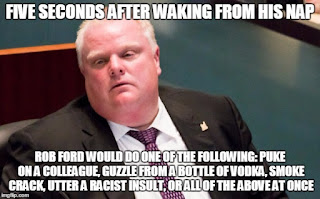 Ford died of cancer after a diagnosis that saw him withdraw from the mayoral campaign during the last city election in 2014. After a tumultuous four years as mayor, in which Ford repeatedly embarrassed himself and the city, ran around with violent criminals, abused staff, behaved like a petulant child throwing tantrums, dodged criminal charges, lied repeatedly, barely showed up at work, antagonized opponents and members of the public, smoked crack, proved himself to be an addict of more than one substance, denied multiple incidents until cornered with the truth, and showed himself utterly unfit for office, Ford stepped aside during the campaign, running instead for his old ward seat as a councillor, which he handily won. His brother Doug, often seen as his chief enabler, and a city councillor himself, stepped into the mayoral race at the last minute and lost to John Tory, who has since proven himself to be a reasonable human being, instead of yet another Ford constant embarrassment. 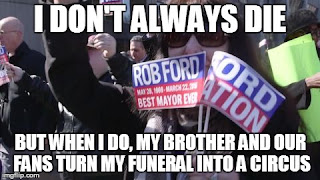 Ford Nation, ever since that election campaign, has been unrepentant in their support of the crack smoking wife beating moron. They continued to call him Mayor, they cluttered up social media with their undying devotion to the Fords, and they have refused to learn their lessons in just what sort of person is fit for office. With his death, they have become even more obnoxious in their devotion.

The Fords come from money, with their father having had taken part in establishing a label company- before cutting out the partner who’d done the lion’s share of the establishing. Rob and Doug Ford presented themselves, despite their wealth, as friends of the “little guy”, conveniently ignoring their bullying ways, their common stupidity, their racism, and mutual stupidity. It has been said that which one of them was the dumber one depended on which of the two brothers were speaking at any given time. Nonetheless, the common opinion among those who are rational is that Rob and Doug Ford were literally the dumbest human beings on the planet. “Honestly,” said Professor Alex McIntyre, a noted marine biologist working at the University of British Columbia. “These two guys could get outwitted by a sponge. And sponges have no brains.” 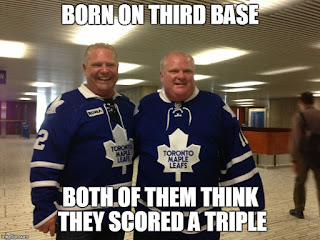 Ford died at the age of 46 (while looking twenty or so years older), leaving behind a wife, children, and a demented mother and siblings who believe their family is a political dynasty, the proverbial Canadian Kennedys. When Caroline Kennedy first heard the remark courtesy of a reporter, she sighed and remarked, “Oh, please. My grandfather might have made his fortune as a bootlegger, but at least he had standards.”

The tumour that finally finished Ford off was relieved, issuing a statement to the press courtesy of  Tumour To English translation software. “I can’t tell you just how happy I am to be out of there,” the tumour told reporters. “Imagine spending months stuck in the body of a slob, hearing his every foolish word, unable to escape from someone who’s spent decades infusing his body with booze, crack, and who knows how many other substances? Anyway, now that I’m free and clear, I’m planning on writing a memoir about the experience.” 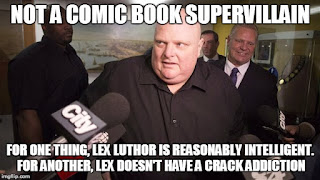 Ford Nation has been in agony since the death of their beloved idol, lamenting their loss, calling him the greatest mayor ever, suggesting that he should have been Prime Minister. Anyone with common sense would have seen that as a disaster. Doug Ford, for his part, has taken full advantage of the death of his brother, wrangling a public funeral for his brother, complete with his coffin lying in repose in Toronto’s City Hall, with a police guard around the coffin. That included two days of public viewings, Doug Ford shamelessly posing for selfies with demented Ford Nationites, and a public funeral service at St. James Anglican Cathedral- despite the fact that Rob Ford hadn’t been in a church in years. Political figures showed up- some gritting their teeth and telling themselves that doing so was the classy thing to do. Ford was repeatedly eulogized in a service that amounted to Doug Ford launching his next inevitable campaign, perhaps for mayor, perhaps for a higher office at the provincial or federal level, though it is fair to say that no political party wants a Ford anywhere near them anymore. 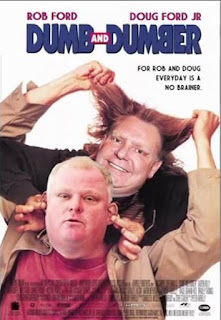 Many members of Ford Nation were watching, or at the streets watching the hearse go by. Some tearfully claimed the man they believed in was up in heaven. Some demanded he be canonized as St. Rob Ford. Others continued to chant their devotion to Ford. And still others were starting to spread the rumour around that Ford faked his death and is now living a life under a new identity, smoking crack to his heart’s content. “He’ll be back someday,” Glen Keating told reporters, wearing his Ford Nation T-shirt with pride among the crowd. “Just when we need him. Like King Archie. Is that the right name for that Round Table guy? Who the **** cares? Anyway, Rob Ford, baby... the man’s bigger than Jesus! And he’s going to rise from the dead, trust me on that.”

A staff member at St. James Cathedral, speaking anonymously, confirmed that the church needed a strict Anglican fumigation after the service. “I know it’s awful to say in the wake of a death, but death does not make a terrible person any less terrible. We shouldn’t have agreed to host the funeral... it’s not as if he ever attended church. We had to sprinkle holy water everywhere to make the church feel like it was clean again.” 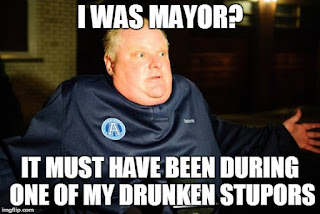 Doug Ford made a statement to the media a couple of days after the funeral. “First off, I’d like to thank all those millions of people across the city and around the world who have supported us and shown how much they love the Fords. They’ve proven their unquestioning loyalty to the dream that is the Ford Dynasty.” He smiled in that demented, out of touch with reality sneer typical of a Ford before continuing. “Which is why I’m promising that the Ford dream will never die. Rob’s gone to that great heavenly place in the sky, and I’m carrying on. It starts with the next mayoral election... Ford Nation 2018! I’m going to win in the biggest election landslide of all time. And then we’re going to take it to the next level, and the next level, and I’m going to be the Prime Minister. Then the King of Canada, and then the Emperor of the World! I’m talking Ford Planet, people! We’re gonna make everyone who ever showed us any bit of disrespect build gigantic statues of Rob and me, and we’re gonna horsewhip ‘em if they give us any lip. Any repeated disrespect will result in people bein’ shot on sight!” 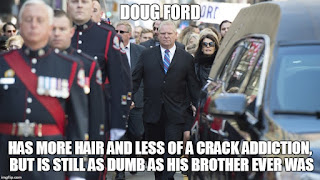 “Are you aware of what you just said?” one reporter asked.

Doug Ford looked confused- a common thing among the Ford siblings; one wonders how many working brain cells they ever had between them. One might also wonder about Doug’s personal addictions, if any. It would explain a great deal. “Said what?” he asked, and walked away.

Many of Ford Nation’s drooling twits earnestly believe their idol is in heaven. Press members attended a different meet and greet, a rather enigmatic one, and as it turned out, the conference was called by the Prince of Darkness. The Devil turned up in Toronto and met reporters at the Rogers Centre, looking like a younger Al Pacino circa the era of The Devil’s Advocate, several days after the funeral. “Thank you for coming. I have a brief statement. There have been those members of the so called Ford Nation- incidentally, have any of you noticed how stupid they are? Because we’re talking catastrophic stupidity. I wonder if their parents were related, or if they were dropped on their heads a lot as babies, or if they took one too many baseballs to the head. Those members of the Ford Nation say that Rob Ford is in heaven having a good time.” 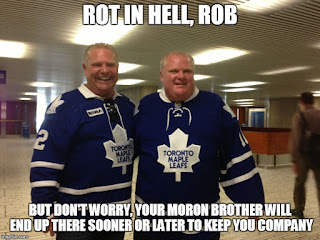 Satan smiled in a way that chilled the bones. “Well, I can categorically say with authority- what with being the overlord of Hell- that Rob Ford is not in heaven. He’s down in Hell as we speak, griping about how there’s no crack, booze, or hookers. Well, what did he expect? One of the nice things about Hell is that we deprive you of everything you ever loved. Which is why he gets no crack, booze, or hookers to keep him entertained. Needless to say, he’s not happy. Particularly when he was told that he’s there forever. When last I saw him, he was throwing a temper tantrum, screaming that he wanted out. Sorry, Ford Nation, but your guy is not in a place with fluffy clouds and harps and a rainbow bridge and eternal peace. But if it makes you feel any better, there’s plenty of room for you all to join him someday.” 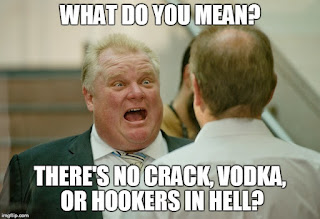 The Devil vanished in a puff of smoke, leaving behind the scent of brimstone. When confronted by the video, Glen Keating shrugged. “C’mon, the Devil’s a liar. We all know Robbie’s bigger than Jesus, right? Of course I’m right. Ford Nation forever, baby!”

As Keating walked away, reporters sighed to themselves, confirming their belief that Ford Nation is populated by some of the dumbest people on the planet. Not that Ford Nation will ever see it that way. 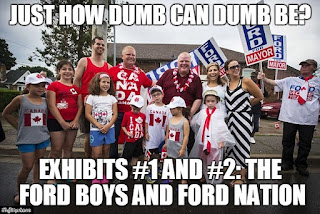