Do We Say Hail To An Impersonator Chief?

While the endless election campaign unfolds south of the border, I thought the occasional review of a movie featuring a fictional (and inevitably better than most of the current crop of candidates) president would do nicely. I'm starting with this one. 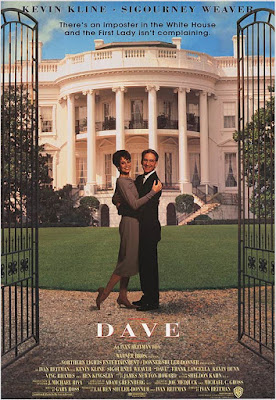 “Hail to the chief, he’s the one we all say hail to. We all say hail ‘cause he keeps himself so clean! He’s got the power, that’s why he’s in the shower...” ~ Dave Kovic

“Why couldn’t you die from a stroke like everyone else?” ~ Ellen Mitchell

“What do you do for a living?” ~ Ellen Mitchell
“You mean when I’m not running the country?” ~ Dave Kovic 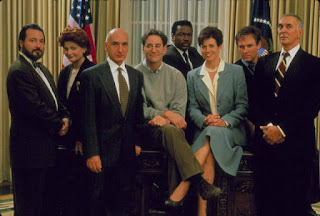 In 1993, director Ivan Reitman brought a political comedy, Dave, to theatres, a film with an exceptional cast and a light but smart tone. The director, known for his deft touch with comedy, took the script by Gary Ross, later known for other screenplays and directing gigs of his own, and ran with it. The film is a fun, optimistic movie that pokes fun at politics, while giving the audience a tremendously likeable protagonist who comes into his own in an unlikely position. 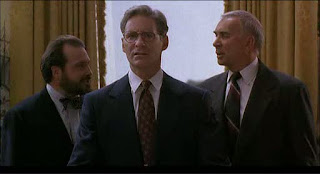 The film opens with Dave Kovic (Kevin Kline), who runs a temp agency helping people find work, while occasionally impersonating President Bill Mitchell (Kline in a dual role) at various events as a gag. He is approached by Duane Stevenson (Ving Rhames) to pose as the President for real- after an official function in Washington. Dave assumes it’s a security issue, while in fact it’s so that the President can have a tryst with one of his White House staffers. 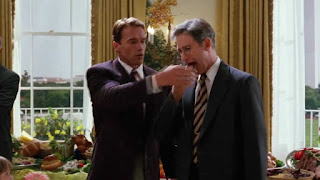 While Dave enjoys himself making a presidential exit, assuming that’s all there is to it, the President suffers a stroke during his interlude with his mistress, ending up in a coma. White House staffers, Chief of Staff Bob Alexander (Frank Langella) and White House communication director Alan Reed (Kevin Dunn), convince Dave to carry on with the impersonation, and Dave finds himself in the position of the most powerful man on the planet- complete with a First Lady (Sigourney Weaver) who despises her husband and a Vice President (Ben Kingsley) who he’s been warned is unbalanced. 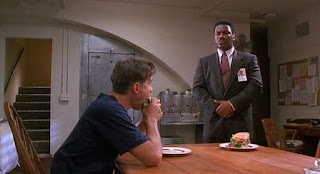 Ross had the idea for several years before the film was made; he wrote the script while working on the Michael Dukakis campaign in 1988. His association with the producer, Lauren Shuler-Donner, got the connections to make the film, though there were delays until Reitman was available to direct. Ross would later end up writing and directing projects like Seabiscuit, Pleasantville, and The Hunger Games, and had previously written the script for Big, so he already had the required experience with comedy and characterization, which shows itself in the script for the film. The story has a breezy pace, with smart dialogue, a lot of in-jokes and nods to the political process. There’s also a fundamentally optimistic sensibility to the film; while one sees the cynicism of political operators, that is strongly contrasted by people of principles and integrity (in politics? Really?). 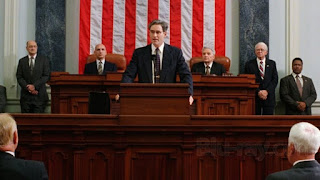 Reitman was a perfect choice for directing this film, with a streak of comedy films to his credit, including Ghostbusters, Twins, Animal House, and Kindergarten Cop. While the film is a comedy, and Reitman plays it that way, there are serious issues to it as well- the responsibility of power, the concept of social justice, and the notion of integrity- and Reitman doesn’t shy away from that either. He moves the film along briskly throughout- there never seems to be a slow, dull moment. Reitman’s directing style matches the warm tone of the script, strongly centered on an inherently decent person who proves to be quick on his feet. Reitman brought in a wealth of cameos along the way- from political insiders to media to actors such as Arnold Schwarzenegger- and shot the film on sets that feel like the real thing, giving the whole production a sense of authenticity. 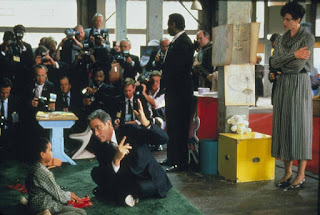 The cast are all brilliantly chosen for their roles. Charles Grodin appears as Dave’s friend Murray, an accountant who’s no doubt used to years of helping his friend ensure that his clients get some work. Grodin plays the character as somewhat exasperated, and then stunned at what his friend has actually signed onto. Ben Kingsley is perfect as Vice President Gary Nancy; the VP is not the lunatic he’s made out to be, but instead a man of integrity and character. Ving Rhames is well cast as Duane. The actor brings the right tone of seriousness and no nonsense authority as a Secret Service presidential detail chief, all business and very little warmth, at least at first. He’s dedicated to his job, not that talkative, but as Dave gets to know him, the audience gets to like him. 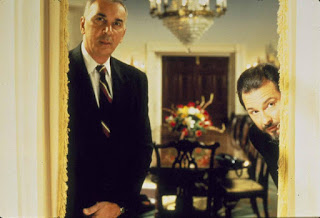 The two chief staffers in on the conspiracy are played by wonderful character actors, both of whom play their roles in different ways. Kevin Dunn plays Alan Reed as sympathetic, more or less pulled into the idea despite his own reservations. He’s smart and savvy, and still has a conscience regardless of the hare brained scheme he’s become involved in. By contrast, Frank Langella’s Bob Alexander is a marvellous Machiavellian antagonist, a scheming and ruthless political operator with plans of his own, no conscience at all, and no scruples. The character is an opportunistic, ambitious weasel. Langella has spent many years of his career playing villains, and throughout the film seems to be having fun chewing the scenery. 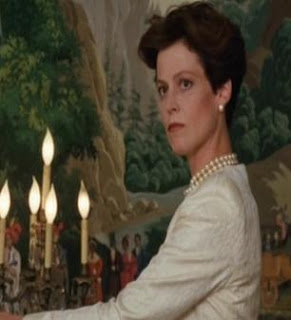 Sigourney Weaver worked with Reitman on Ghostbusters, and she gets to play the First Lady in different ways. When we first see her, she seems cold and aloof, but when it’s clear that the President is a cheat, we can understand why. Dave is shocked when he discovers that she hates him- to great comic effect. And yet there are strongly held principles beneath the ice queen exterior, as well as a sharp mind. As the film goes along, it is a pleasure to watch her character get to know the impersonator in the Oval Office, and Weaver has great chemistry with Kline. 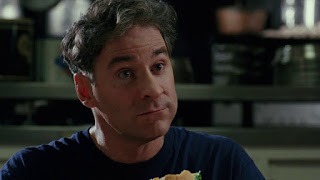 And speaking of the leading man, Kevin Kline is perfect as the idealistic, decent, and lovable Dave Kovic. He might seem completely out of his element taking on the impersonation gig, but he really comes into his own playing the part of the President. In fact, it’s more than one performance, as the actor plays Dave, the sleazy president Mitchell, and Dave posing as the president. Kline is charming and gives the role a spirited performance; he’s as good a dramatic actor as he is with comedic material, and the script gives him plenty to work with. 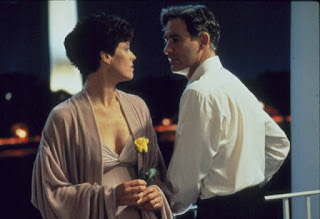 While we deal with a seemingly endless presidential campaign filled with negativity and toxic personalities, it’s refreshing to see a presidential comedy peopled with characters who understand decency, integrity, and principle. Dave has all of that, playing around with the idea of a political impersonator who’s better at the job than the man he replaces, and the film brings a rich sense of humour along the way. It’s a delight to watch. 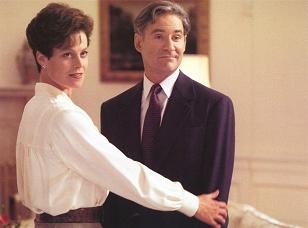 Posted by William Kendall at 8:36 AM