A Day In The Life Of A Drunken Mayor

Some links before I get underway today. Norma wrote about unlikely toys and games. Parsnip had plenty of Hamish and Watson to share. Maria wrote about dialogue tags. And Cheryl featured old cars at her blog.

Now then, we are under one week to the municipal elections in Ontario, including the one in Toronto, where the Ford boys persist in running for office. In an ideal world, all of the Fords would be run out of office, but it might be that the drug addled idiot Rob might well be elected in his old council seat (where he will be treated as a pariah by city council, reduced to nothing more than the pissed off jackass that he is). I'd still prefer him to be kicked out of office, but we'll see what we'll see. There'll probably be one more of these to come at some point after the election, but if the drunken temper tantrum happens to win a council seat, I might carry on with these from time to time. His thug of a brother Dougie, however, is unlikely to end up winning the mayorship (fingers crossed). And so we have ourselves once again, the voice of the most annoying politician this country has ever produced as he goes through his election day. I've left the ending a bit ambiguous though, just in case. 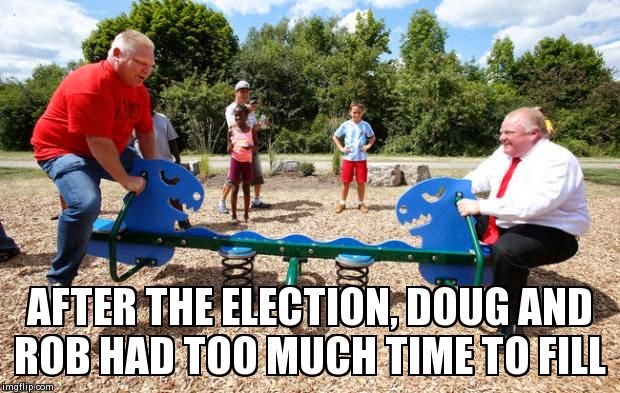 Gotta get up. Today’s the big ****in’ election day, and me and Dougie, we’re gonna wipe the floor with all those ****ers who think we’re not fit for office. 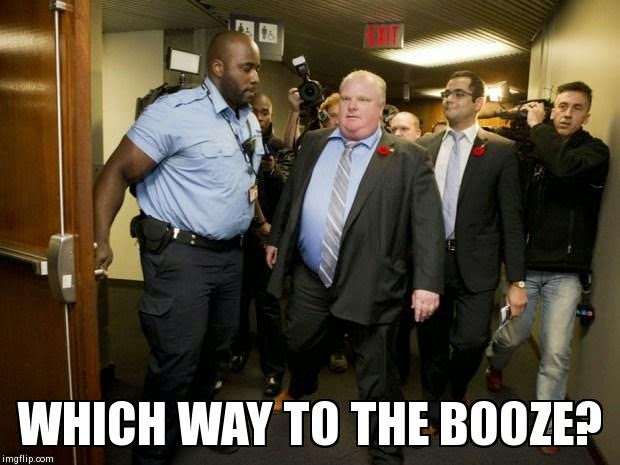 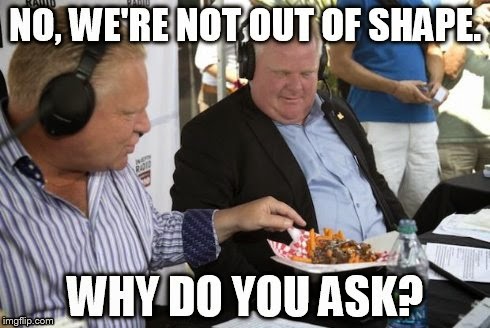 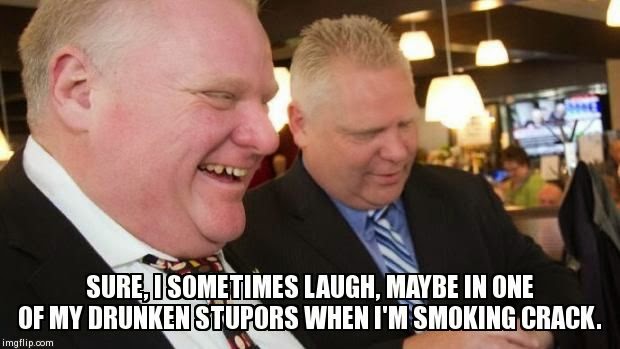 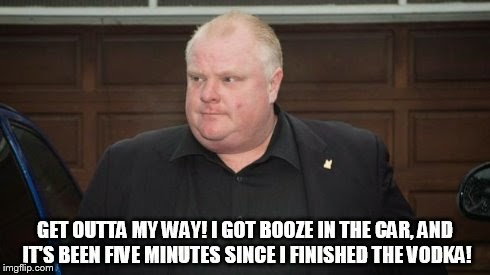 11:39 AM. Dougie and I agree to meet up later. He’s off to do last minute mayor candidate crap, and I gotta get goin’. Gotta get my vote in for me and my brother and that piece of **** nephew of ours. Who gives a **** if Mikey’s runnin’ for trustee in a different ****in’ ward? Nobody tells Robbie Ford what he can and can’t do! 12:05 PM. Drivin’ myself. Hey, I’m good to drive. Just because I’ve already drunk two bottles of vodka this mornin’ don’t mean I’m repaired, or whatever the **** that word is. 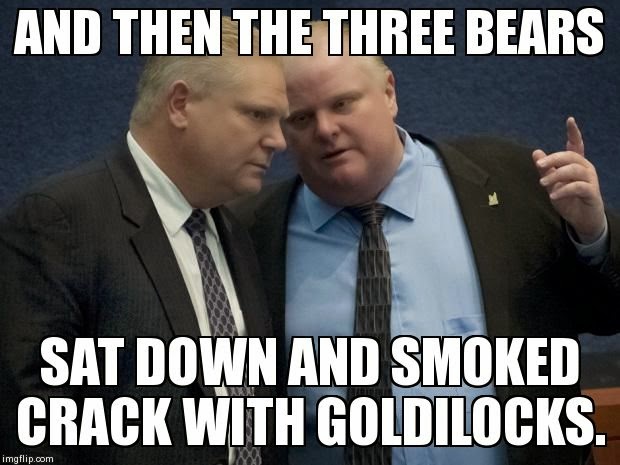 12:12 PM. Stop in at KFC, pick myself up a couple buckets of chicken. Yeah, that’ll do for an election day lunch. Wave at people. Vote Ford! Don’t forget! Ford More Years! 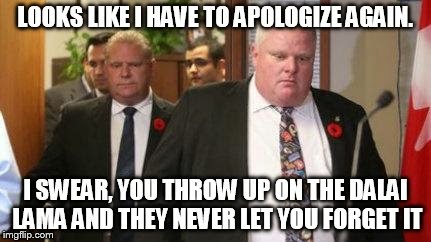 12:35 PM. In my offices at my campaign headquarters. Door’s shut. Devourin’ fried chicken. Smokin’ crack. Drinkin’ vodka and wine chasers. Does life get any ****in’ better than this? I don’t ****in’ think so! 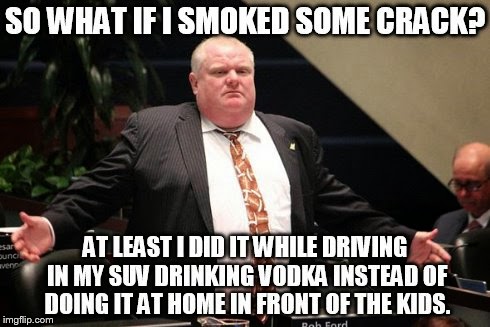 1:40 PM. Stop in at the local election station. Hey! I’m here to vote! Don’t forget, all of you, vote Ford More Years! 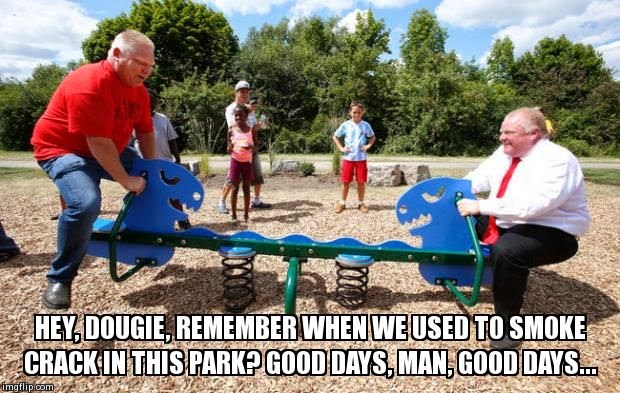 1:41 PM. Some stupid ****er tells me I already voted several days ago and that campaignin’ in election stations is strictly against the rules. Hey! **** you! And **** the rules! Nobody tells Robbie Ford he can’t vote as many times as he wants to ****in’ vote! You’re just some ****in’ left wing pinko commie hippie fascist who lives on the ****in' Beach and eats granola bars! ****in’ downtown elitist scumbag! Get the **** outta my way! 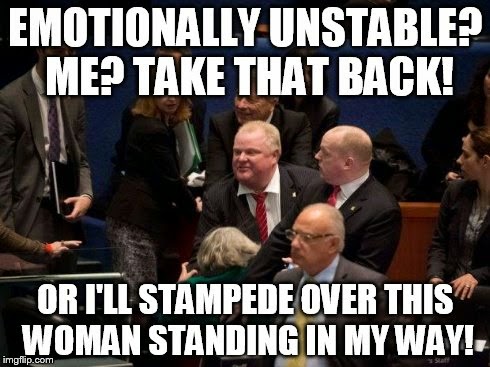 1:42 PM. Storm over to the voting table. Shove a little old lady outta the way and sit down. Let’s see, who do I mark down for mayor? Well, there’s Dougie’s name right there, but somethin’ about that candidate marked Crack appeals to me. Hey, that reminds me, who’s a guy gotta smack around to get some crack in here? 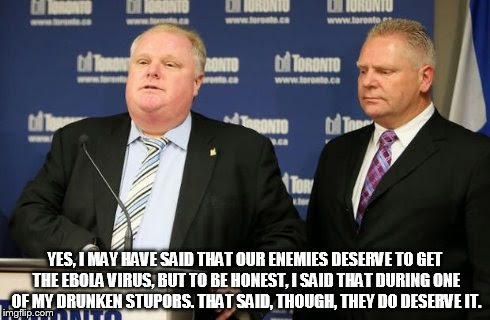 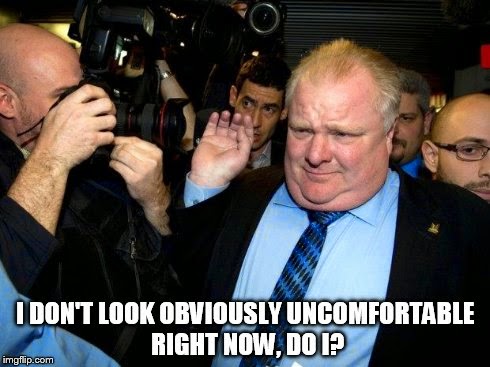 2:25 PM. Back in the office. It seems my little tirade made the ****in’ news. Got that stupid little ****er spokesman talkin’ to the press right now over the phone, saying it was all a big misunderstanding. Yeah, that oughtta buy me a bit of time. 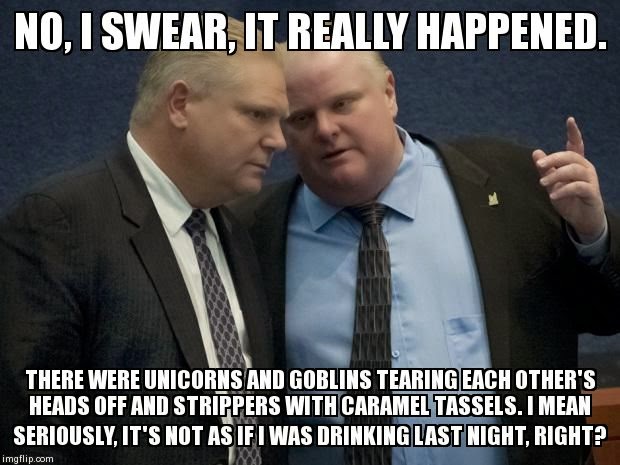 I pause for a moment and start to speak. Yeah, sure, I mighta caused a scene at that votin’ station earlier. Yeah, sure, I know that old lady broke her leg, and really, my heart bleeds for her, but at the end of the day it’s her fault for not gettin’ the **** outta my way. Look, what’s important is it’s all in the past, and it doesn’t matter anymore, and I was in a drunken stupor and we gotta move forward with the Ford Agenda and bulldoze every single ****in’ house of everyone on our enemy list. That’s all the **** I’m gonna say to you mother****ers. Ford More Years! 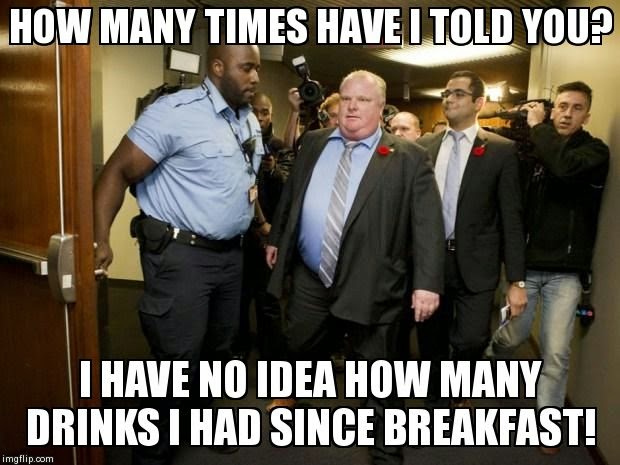 6:02 PM. Me and Dougie are watchin’ the local news while drinkin’ vodka and smokin’ crack. Turns out those ****ers in the press are ****in’ with us and showin’ me on my tirades. Buncha stupid ****ers, they’re all in on it, brother. All of those ****ers are out to get us, the press, the left wing pinkos, the cops, the downtown elites, the Daughters Of The American ****in’ Revolution, the Queen, the Pope,  the ivory tower ****ers, the Society Of Where’s Waldos... the list of enemies never ends. Well after tonight it’s gonna end, because you and me, we’re gonna win, and then we’re gonna get even with all those ****ers. Ford Domination, brother! Ford More Years! 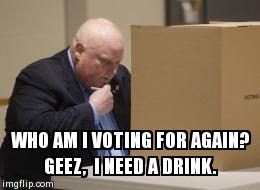 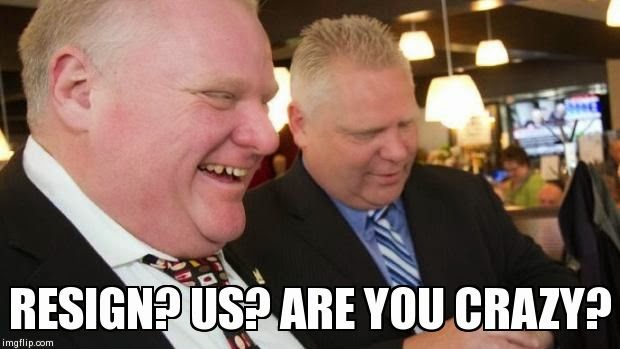 8:02 PM. Finished dinner with the whole ****in’ Ford family. Sooner or later we gotta let one of those ****in’ camera crews in here to get some ****in’ footage.  Stupid press ****ers. After I’ve had some vodka. Gotta chase down all this greasy food with somethin’. Hell, it even makes bein’ around that wife and those ****in’ kids of mine tolerable. 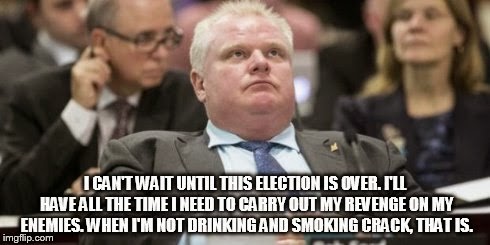 8:37 PM. Watchin’ the election results. Mayoral result not goin’ our way. Looks like we might be in trouble in my ward too. Dougie! I thought you said we brought in a lot of ****in' stuffed ballot boxes to make sure we’d both win! 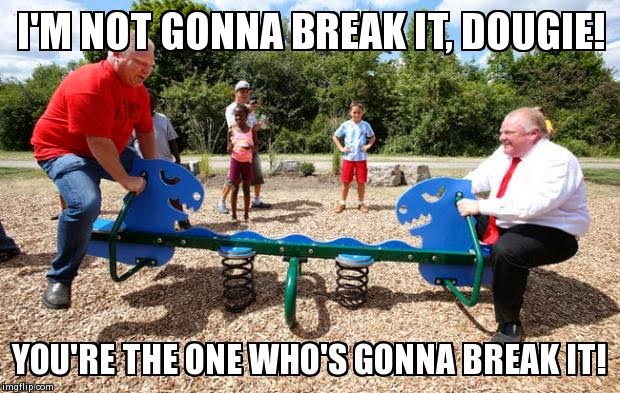 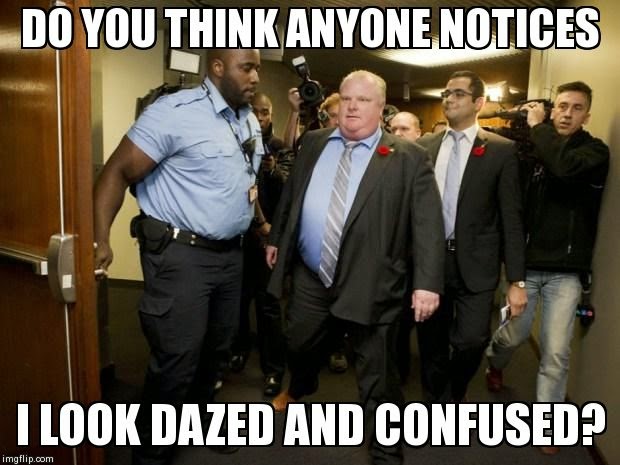 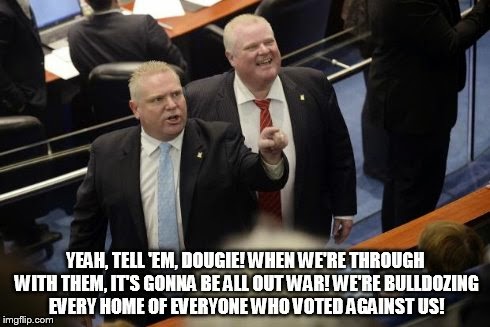 10:00 PM. Dougie’s finished his speech. Highlighted by phrases like rivers of blood, scorched earth, hellfire and destruction. Yeah, man! That’s the way to go out! Time for me to talk. 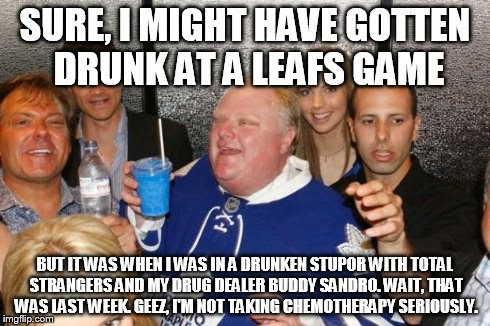 10:03 PM. In the middle of my speech. Rantin’ and complainin’. It’s all been a conspiracy, folks. They all did this to the Ford family. Every single one of those ****ers out there who laughed at you for supportin’ us? They’re in on it. Every single ****er who said we were unfit for office? They’re in on it! It’s their fault! Not ours! But don’t worry. The torch is still lit. We're still out there. Ford Nation will be **** in’ back! **** yeah! We’ll be makin’ their lives hell for years to come, man! And it starts right here, right now! I want every single one of you stupid ****ers to go out and burn down the homes of everyone who voted against us!  Ford More Years! 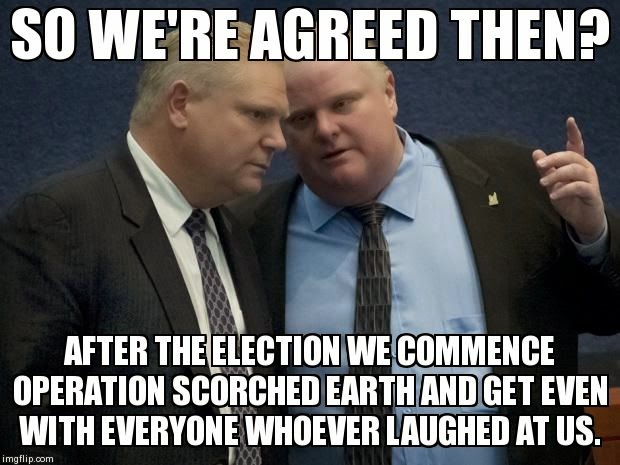 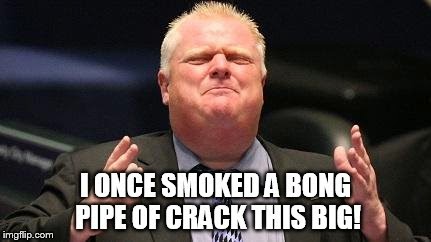