The Five Hoods: Is That An English Accent?

Some links before we get started today. Yesterday Parsnip had a Square Dog Friday. Hilary had the divine Lucy front and center the other day. Mark wrote about lawn mowing. Lorelei wrote about Jack O'Lanterns. And the Whisk asked who you'd fight.

Now then, time for the next in my series of reviews on movies about the archer from Sherwood Forest... 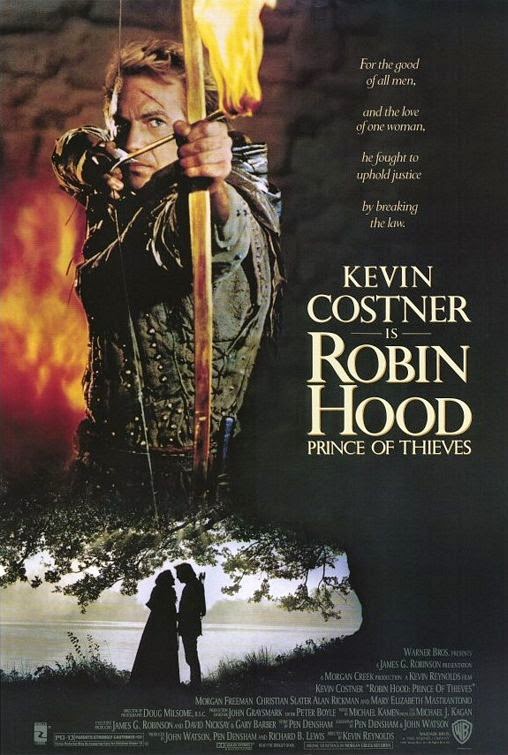 “A wise man once said there are no perfect men in the world, only perfect intentions.” ~ Azeem

“Why a spoon, cousin? Why not an axe?” ~ Sir Guy of Gisbourne
“Because it’s dull, you twit. It’ll hurt more!” ~ Sheriff of Nottingham

“How is it that a once-arrogant young nobleman has found contentment, living rough with the salt of the earth?” ~ Marion
“I’ve seen knights in armor panic at the first hint of battle. And I’ve seen the lowliest, unarmed squire pull a spear from his own body to defend a dying horse. Nobility is not a birthright. It’s defined by one’s actions.” ~ Robin Hood 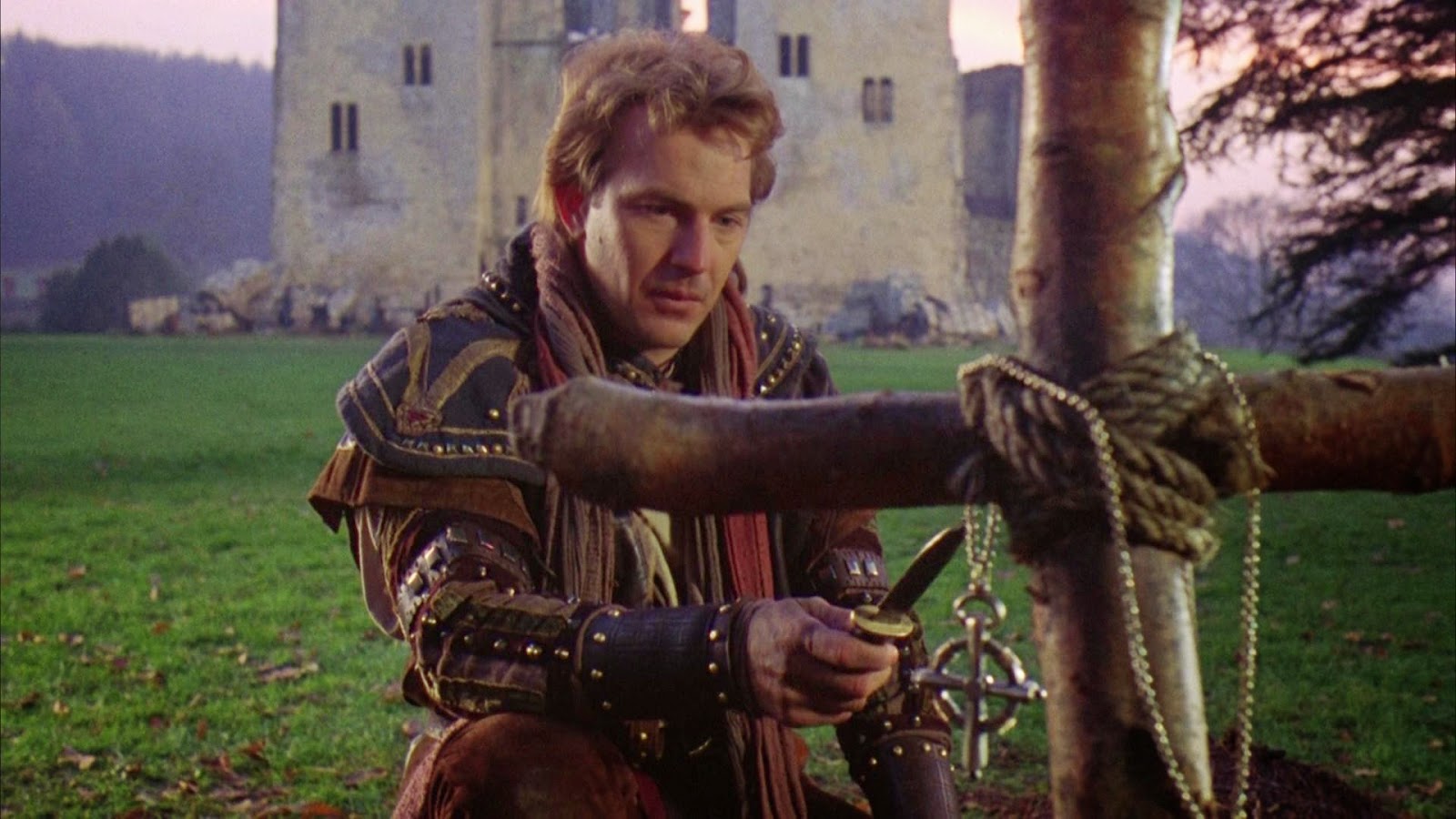 Robin Hood Prince Of Thieves is the 1991 action adaption of the Robin Hood story from director Kevin Reynolds, taking the screenplay and story from Pen Densham and John Watson and telling the story of a modern Robin Hood fighting a particularly bad tempered sheriff of Nottingham, with the fate of all England at risk if he fails. It’s cheesy and goofy, but fun, featuring a leading man who quickly gives up on trying to maintain an English accent, and a villain played by an actor who seems to be enjoying himself playing such a rotten person.

Things start out in Jerusalem, where the nobleman Robin of Locksley (Kevin Costner) is a soldier in the army of King Richard, imprisoned with his friend Peter for a few years. They escape with the help of a fellow prisoner, a Moor named Azeem (Morgan Freeman), though Peter is mortally wounded. Azeem vows to stay with Robin, who has saved his life, and the two set sail for England. It’s been years since Robin last saw his home, but his father, with whom he parted on bad terms, has been killed and his lands taken by the Sheriff of Nottingham (Alan Rickman) and his cousin Sir Guy of Gisbourne (Michael Wincott).  Robin learns from Peter’s sister Marian (Mary Elizabeth Mastrantonio) what has been happening in the land, and he, Azeem, and his blinded servant Duncan flee into Sherwood Forest, pursued by Gisbourne and the soldiers of Nottingham. 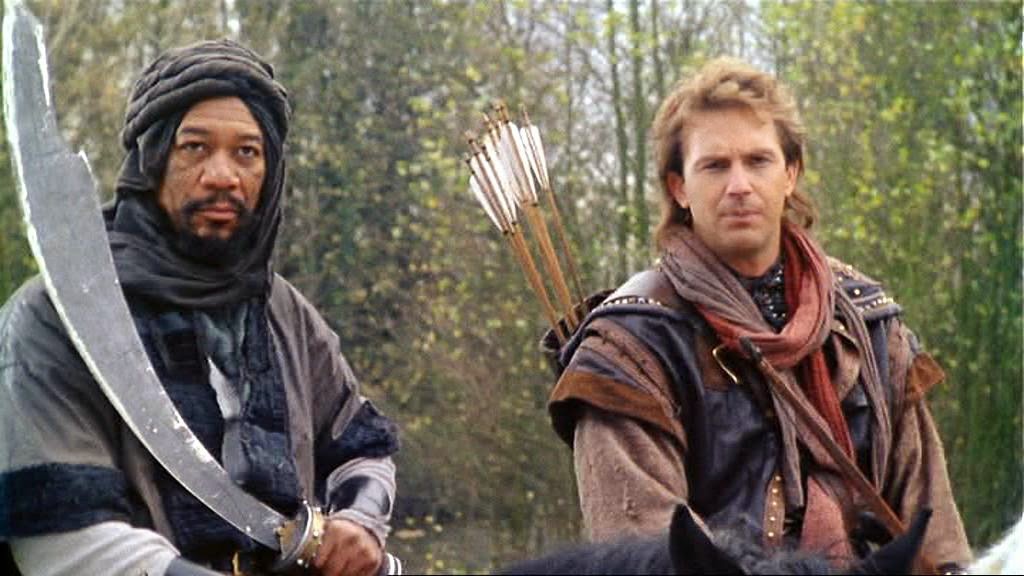 There they meet a band of outlaws. Little John (Nick Brimble) leads the group. Robin makes a good impression on Little John and the others by besting him in a quarterstaff duel, but finds himself the subject of hostility from Will Scarlet (Christian Slater). Later Friar Tuck (Michael McShane) enters the picture and joins the band. Robin takes charge of the group, rallying them to stand up in resistance to the ambitious Sheriff, reasoning that they are all free men fighting for England as it should be. 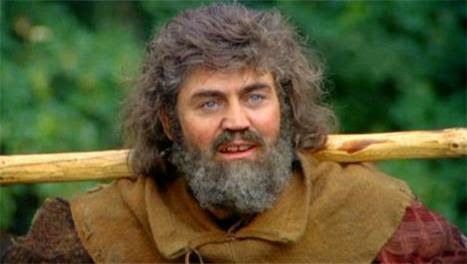 Reynolds and his crew filmed most of the production on location in the United Kingdom and France, along with some interior sets done in England. Some of the locations are quite lovely places- the locations for Sherwood, in particular, have a green and alive feeling to them. By contrast, other locations, have a bleaker feel, such as the arrival on the coast of England, or the lair of the Sheriff’s witch. Reynolds has a particular skill with action films; he later directed The Count Of Monte Cristo, and worked with Costner again on Waterworld and Hatfields & McCoys. There are creative touches in the way he films things, such as the arrow’s point of view as it’s being shot towards its target. He  brings his skills as an action director to the table, and it does show. 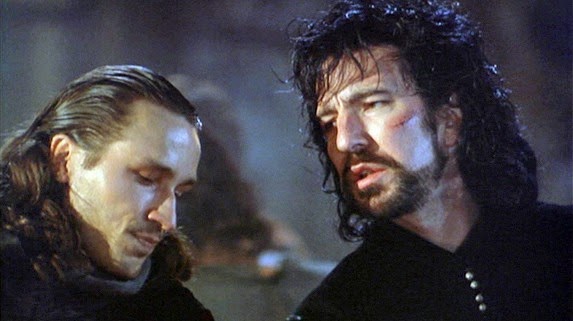 The crew make things feel medieval, and that shows itself in the details. Sets certainly look of their time, and the same applies to costumes and props; the Witch Mortianna in particular looks dreadful. The outlaws and the common people look very common, musty, and grimy, as if they haven’t had baths in awhile (Marian does tell Robin to take a bath, after all). Castles have an oppressive air to them, badly lit and filled with hidden passages, dark dungeons, and secret occult chambers. Celtic warriors look like savage barbarians (the Scots would not like how their forebears were portrayed as wild, vicious thugs for hire). The music score by Michael Kamen is one of his best works, a thrilling, romantic, thoroughly dashing collection of themes that fit the film well- and gave rise to a certain Bryan Adams song that has played at countless weddings ever since. 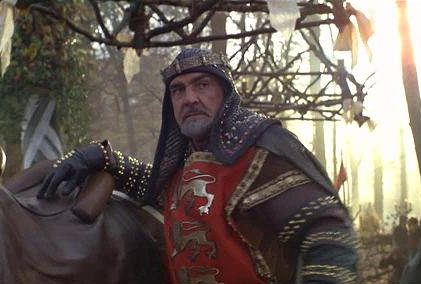 The casting of the film is quite mixed. Sean Connery turns up at the end in a cameo as King Richard, as authoritative as you’d expect him to be, and it’s a nice touch, as he and Costner co-starred in The Untouchables together. Brian Blessed is a character actor who’s done a lot of work in British films, and he turns up early as Robin’s father Lord Locksley, a father worried about his son, distressed by the estrangement between them, and still mindful of his duties as a nobleman. Walter Sparrow plays the aged servant Duncan as completely loyal, even at the expense to his own health, playing him as fragile. Nick Brimble plays a different kind of Little John, a coarse man with a wife he both loves dearly and bickers with. He certainly looks the part, a big man who looks like he’s been in a fight or two in his time. Michael McShane gives Friar Tuck an interesting take- he plays the boisterous priest with a drinking habit as you’d expect, but he’s deeply suspicious of  and hostile to the Moor in the midst of the outlaws- until Azeem gives him reason not to be. 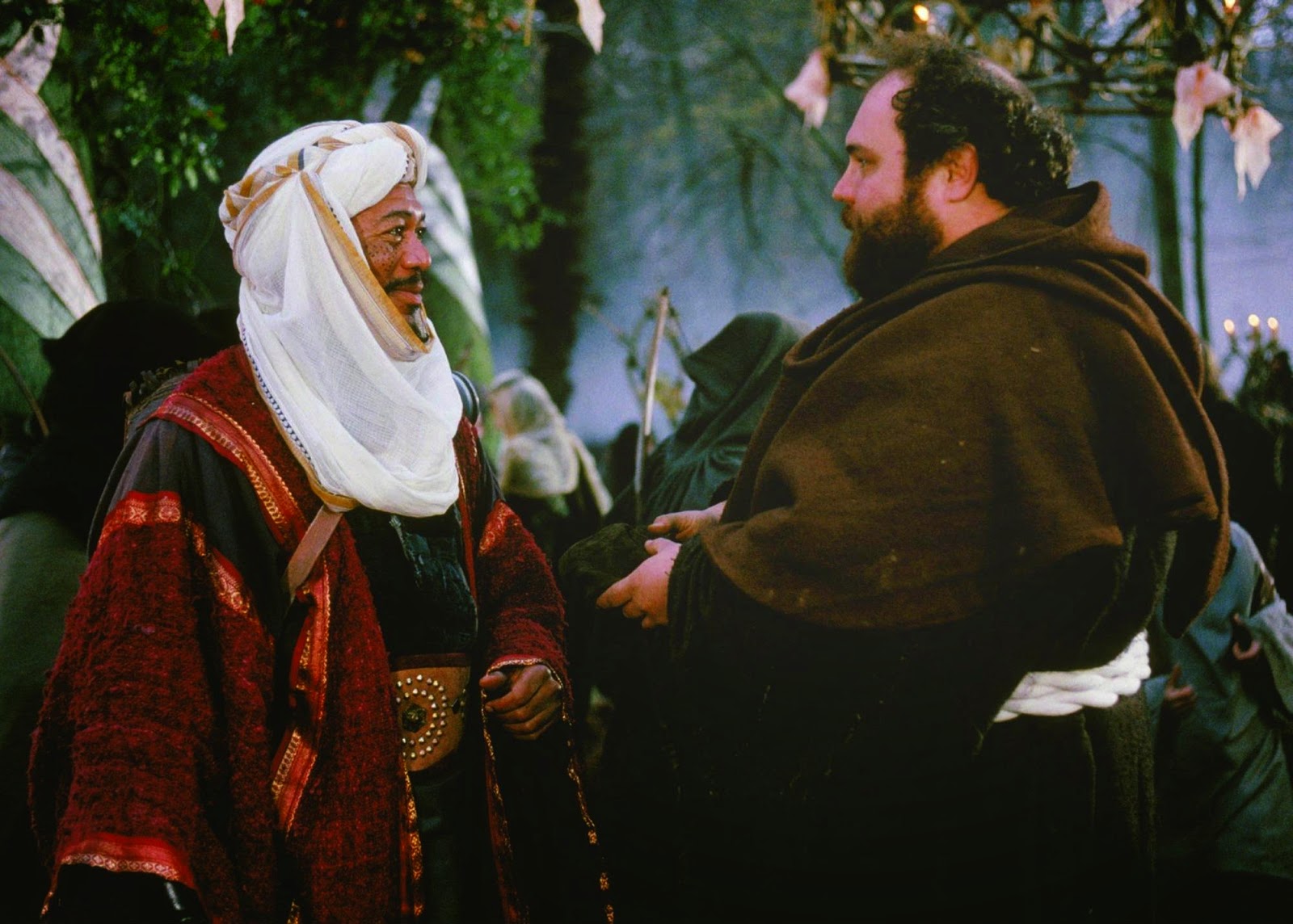 Geraldine McEwan plays the nasty witch Mortianna as if the character is insane (she probably is) and thoroughly evil. There’s no shades of grey in her. Michael Wincott, who would later work for Reynolds again in the adaptation of The Count Of Monte Cristo, has a history of playing villains and scoundrels, and such is the case with Guy of Gisbourne. He’s much more of an underling than Basil Rathbone’s take on the character, willing to let his cousin take the lead, but he’s a nasty, cruel piece of work all by himself, and it shows in the way he treats people. 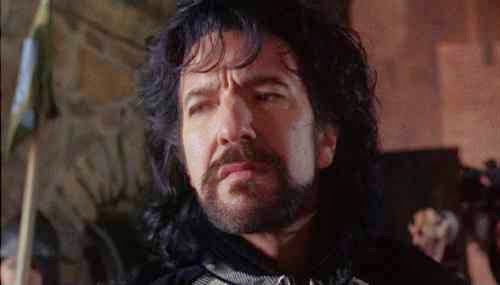 Alan Rickman gets the most fun in the cast playing the Sheriff of Nottingham. He has a wide range of roles as an actor, but three characters have become signature parts for him: Hans Gruber in Die Hard, Severus Snape in the Harry Potter films, and this role. His Sheriff is ambitious, cruel, vile, petty, temperamental... and gets all the great lines. He rants and roars, chews the scenery, demands that Christmas be cancelled, schemes, rolls his eyes, and looks like he’s having a ball. When he’s on screen, you just can’t take your eyes off him. Sure, he’s evil, but he’s so much fun. 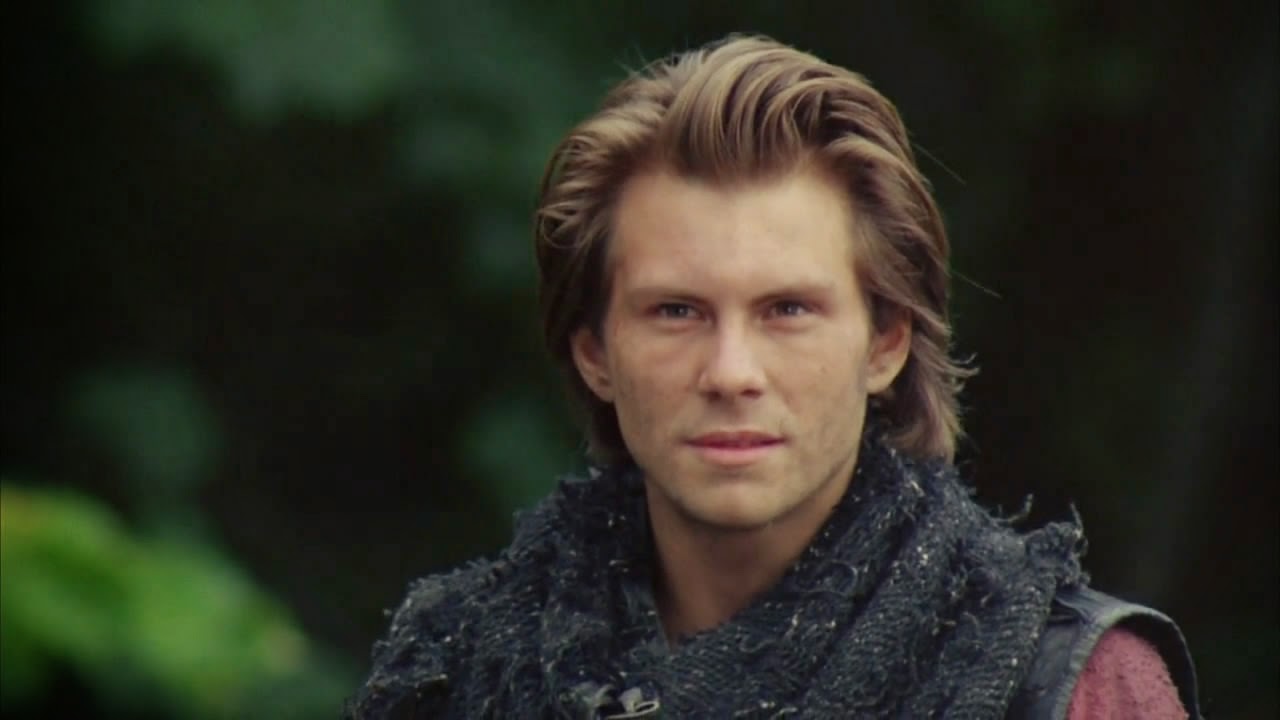 Christian Slater is pretty much playing Christian Slater in his take on Will Scarlet. That’s not a bad thing, mind you. He has to play the character as a young man with a chip on his shoulder and a grudge that has to be explained late in the story. There’s a snarkiness in the character at times, but also a lot of pent-up anger at the intrusion of Robin. When we learn the reason for it, it’s understandable, though you might think Robin should have just asked much sooner. Wouldn’t he have thought, “Hmm, I know why the Sheriff is mad at me, I mean, I’ve defied him, made him look bad, stole his taxes, given him a nice facial scar and all, but what’s Will’s problem?” 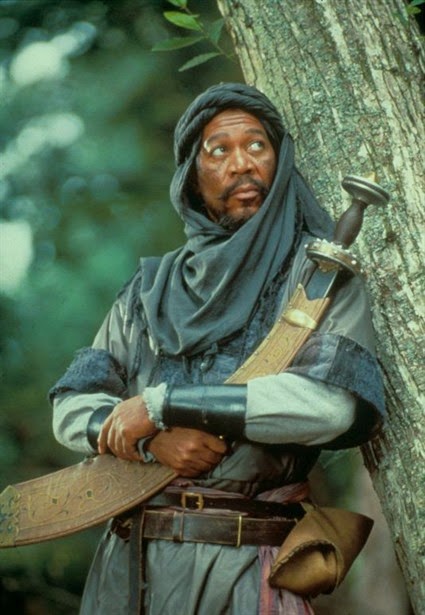 Morgan Freeman already had a lot of work to his name at the time, but it had been Glory a couple of years earlier that really got him attention as an actor, and when this film came his way, he started out on his streak of being one of the more interesting actors in any movie, a reputation that he has maintained to this day. His role as Azeem is an interesting one. He’s a wise man, one of courage, an outspoken outsider who finds a home among people unlike him. There’s a warmth to the character that makes him likable. 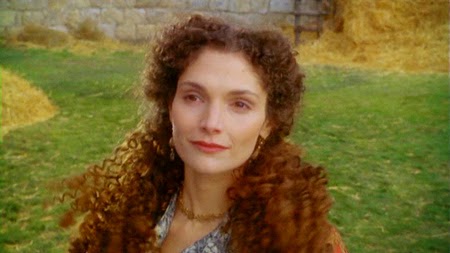 Mary Elizabeth Mastrantonio does what other actresses have done before her with Marian. She plays her as headstrong, independent, and principled. There’s courage in her, a forceful strong will, and when we first meet her, that comes across clearly. She doesn’t know what to think of Robin at first- she just remembers him as the spoiled brat who teased her in childhood before heading off to war with her brother. It’s only when she sees the life he’s making for himself as a leader of others, as she sees that he’s living up to principles, that she sees him differently. Nevertheless, she’s charmed by the man he’s become, drawn to him, and those are qualities she conveys in her performance. 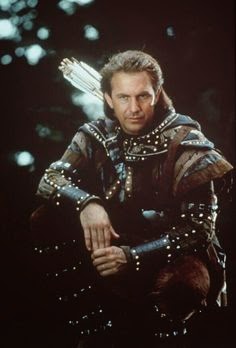 Costner took a lot of flak at the time for the role (he got a Razzie for this one, actually). He starts out trying on an English accent as Robin, but it doesn’t last long. He also starts out in earnest, trying to be more serious early on, coming across as rather grouchy. It’s only when he ditches the accent, settles into the role, and ends up among the outlaws that he seems to come into himself as Robin, and seems to be having fun. Costner conveys himself as a leader, but there’s also the charming rogue there, both in terms of Costner as an actor and as Robin Hood the cultural figure. It’s a flawed take on the character, but not without its good sides.

There is a good deal of cheesiness to Robin Hood Prince Of Thieves. Its leading man decides early on to stop speaking with an English accent, thus exposing himself to endless ridicule in Mel Brooks’ parody later on. And yet that cheesiness has its own amount of fun to it- it’s a popcorn kind of movie with a clearly cut hero defying the oppression of a villain. And that villain is played to the hilt as an over the top nasty piece of work... by an actor who makes the most of the role.

In my last review of this series, I’ll finish things up with my favourite interpretation of Robin Hood. Most of you will not have heard of it. 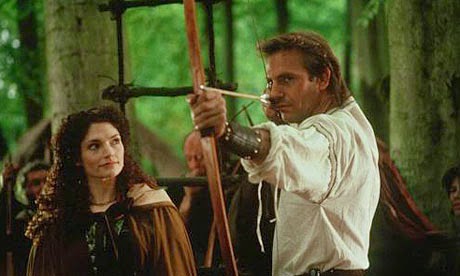