Penniless Hearts: It's Not The Destination, It's The Journey 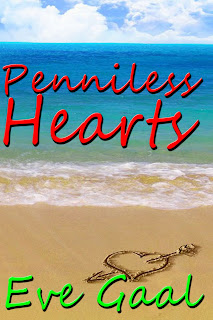 “Well, it’s a long story, but generally if you listen to the National Geological surveyors, we are safe over here in Kauai. However, if you listen to Hawaiian folklore and the legends involving meles and chants recited by the islanders, you will learn that this area is the home of the restless goddess Pele. When her toes start tapping, I guess everyone has to watch out.” He smiled when he said the last part, almost as if he thought it seemed funny that modern day Hawaiians still believed such fantastical tales. ~ from Penniless Hearts

Eve Gaal writes this book with strong characterization as a foundation. The characters each have distinct personalities, and once shaken out of the status quo that they're so used to come to life. Their personalities feel fleshed out, and most importantly, each of them have distinct voices. Penny as the core of the book is on a journey of discovery, a fanciful woman whose impulsive trip is completely understandable, and who she is by the end of the tale is someone who has changed. John and Carl, who start out generally taking this woman in their lives for granted, show surprising character growth. The character who sticks out as most surprising though is Tina. Overbearing and not terribly sympathetic at the outset, she changes over the course of the story, becoming steadily more likeable and more human.

The location itself takes on a life of its own as a character. Hawaii has a certain ethereal quality as a place, with its own pace of life, very different from the way things are on the mainland, and Penny finds herself immersed deep into it. From the culture to the scenery, the islands underlie everything, and the essence of this paradise soaks itself into the writing. The end result is that the reader finds themselves wanting to spend a few weeks- or months- soaking up the sun on a beach in Hawaii, or check out a lava field. Even if that means the locals will still see you as a tourist.

Penniless Hearts is a character driven romantic misadventure of sorts, a tale of growing and changing as people. It has a dreamlike quality to the writing, particularly Penny's inner voice. The plotlines tie together at their own pace, and the characters have a genuine sensibility to them, even the unpleasant ones. They feel real to the reader. The pacing of the novel works well, giving us a sense of fun, all while staying true to the journey.


Eve Gaal can be found at her blog, The Desert Rocks. Penniless Hearts can be found here at Amazon as an ebook. Eve herself lives in the Southwest with her husband Steve and a precocious dog named Fiona.

Posted by William Kendall at 6:15 PM