And so we come to the second part of this Christmas Carol skewering, and thus far, there has been no trace of a 19th century English author making a spectral appearance in my quarters to yell at me for parodying his work. 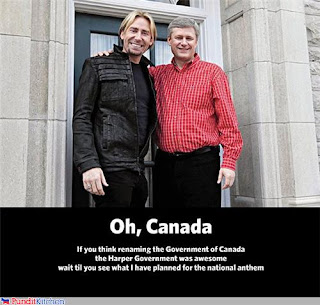 The First Of The Three Spirits

Prime Minister Harper stared out through his window, out onto the grounds around 24 Sussex, covered in snow (remember dear reader, this was Ottawa, where winter stretched from late September into June). He shook his head, imagined the whole encounter with a spectral Preston Manning to be little more than a dream. The conversation bothered him exceedingly, and he tried to think of other things. He contemplated the troubles of the embattled mayor of his largest city, an ally and an oaf, threatened with removal from office pending appeals on conflict of interest charges. He had mused on the notion of sending Mayor Ford to be High Commissioner to the United Kingdom; surely Rob Ford could teach those British a thing or two about high culture and proper etiquette.
He became aware of movement in the room, and looked up. There before him was a man, familiar to his eyes. He wore a suit and glasses, and his jowls were more pronounced than ever. His eyes were disapproving, but they always had been. For this was a man whose party Harper had stolen right from under him, a former Prime Minister who objected strenuously to the way Harper and his neo-Conservative allies had dismantled the party and its reputation.
“Joe Clark?” Harper asked. “How did you get in here?”
“I have taken his form,” the visitor told him in a strange voice. It was soft and low, gentle, but seeming at a distance. “But no, I am not him.”
“Then who are you? Or what are you?”
“I am the Ghost of Christmas Past.”
“And what business do you have with me?”
“Your welfare, Stephen. Rise, and walk with me.”

The Spirit took Harper by the arm, walking him towards the wall, and the pair passed through it. They found themselves in a quiet street, snow covered, nothing at all like 24 Sussex. “Good Heaven and gun deregulation! I was a boy here!”
“Why do you say gun deregulation?” the Spirit asked.
“Well, I hold that as sacred as Heaven,” Harper replied.
“I see we’re going to have a lot of work to do on you.”
They saw a group of boys playing in the snow, throwing snowballs at each other, building snowforts, all the games children would play in fresh snow. Boys dashed past them, seeming to ignore them. Harper looked at the Spirit. “Do they see us?”
“They have no consciousness of us. They are shadows of the past. We are not seen or heard by any here.” He paused, looking on. “Ah, there we are.” The Spirit pointed, and Harper saw the boy coming down the street, looking serious.  “Do you recognize him?”
Harper stared, and finally nodded. “Yes, yes. It’s me. As a boy.”
They watched him passing by the crowd of other boys. One of them stopped him, inviting him to play in the snow. “I can’t,” the young Harper replied. “I have serious things to do. I’m going to be Prime Minister one day, you know, and as Prime Minister, I have no time for play,” the boy declared. The other boys laughed at that.
“Stevie, who wants to be Prime Minister anyway?” another boy asked.
They watched the boy Harper shrug, and walk up the street, and the other children returning to play. The Spirit looked at Harper. “Honestly, Stephen, what eight year old dreams of being a prime minister? I’ll just say it, you were old before you were eighteen. Now then, we have more to see, and much to do.”
The Spirit took Harper by the arm, and they passed through another wall. They emerged on the other side, on a snowy walkway with a few young people passing by, and strode towards another building. There were decorations out and about, signalling that it was another Christmas. “Do you know this place?”
“Of course. It’s the University of Calgary. I went to school here. But what brings us here, Spirit?” Harper asked. “Is it not exam period for these students? Should they not be studying and being responsible about it?”
“No, Stephen, exams are over. Most have gone home for the holidays. And really, would it have killed you to let your hair down and just enjoy the university experience, rather than being an “all business, all the time” wanker?”
“Now I know you’re not Joe Clark. He wouldn’t use that word.”
“Yes, well, you see, the fellow who’s writing this saw fit to describe you that way. He’s very unimpressed with you and what you’ve been doing to the country, so just in case it’s not obvious, this whole thing is a hatchet job.”
“What on earth are you talking about, Spirit?” Harper asked.
“You see, there’s this fellow who’s working at a computer...”
“Oh, not again with the Fourth Wall!” Harper yelled in frustration.
The Spirit rolled his eyes, taking him by the arm. “Come with me, Stephen.” They passed through the door, into a large open area. A man was speaking at a podium. Most of the people around him were just passing by, paying the speaker no attention at all. “Do you recognize him?” the Spirit asked.
“Why, yes. It’s me. When I was a student here.”
The younger Harper spoke, with the same sneering contemptuous tone he had become known for as a politician. “We will only break the eastern stranglehold on politics in this country by adopting a scorched earth strategy in how we approach everything. That means attack ads, demonizing the political opposition, manipulating public opinion, continuing to cut corporate taxes no matter what the cost, removing all regulations to make things much more business friendly! That is my vision for a new Canada, under the careful rule of my benevolent tyranny!”
The Spirit frowned as the young Harper continued his rant, despite the fact that no one was listening. “Consider yourself lucky no one was paying attention to you. Or that no one was videotaping you. Think of what that tape would mean in the hands of your political opponents.”
“Yes, they’d destroy me for sure, long before I had a chance to destroy them. That reminds me, I should step up my attack ad campaign against them. Maybe a Boxing Day attack ad suggesting Rae, Mulcair, and Justin Trudeau are all Freemasons conspiring to overthrow the country. Do you think the voters would buy it?”
The Spirit shook his head. “Stephen, do you not see? Your rabid partisanship, your absolute sense that if someone disagrees with you they must be your enemy, your inability to compromise, your political zealotry... your lack of compassion and regard for those less fortunate... it all started long ago. Think of this. Look at that young you. Did he have any true friends? Was there anyone who would have missed him?”
Harper stared again, as his younger self went on and on about radical reforms and tearing down the status quo. Finally he shook his head. “I wish to see no more of this, Spirit. Why do you delight in torturing me?” He turned on the Spirit, and struck him in the chest. “Haunt me no more! I will have none of it! Bah! Shawinigan!”
The Spirit looked upon him with sadness, and there was a brilliant flash of light. The Spirit was gone, and he was alone in his study. Harper looked around, and sighed. ”Hmmmm,” he whispered to himself. “Benevolent tyranny? You know, I could use that for a campaign talking point...” 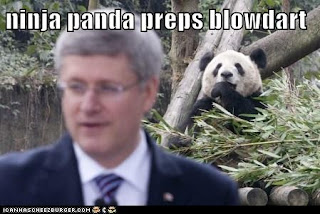 Posted by William Kendall at 2:37 PM