A 24 Sussex Christmas Carol, Part One

Today I begin something a little different, something that I have had in mind for nearly a year. In the first of four parts, I have taken on a skewed version of A Christmas Carol, borrowing and adapting the odd line here and there from Mr. Dickens. My Scrooge is one of my least favourite people in the country, as you will quickly see. And there is a fair amount of all this nonsense that only Canadians will get, so bear with me.

Thanks, Charlie D., for letting me play around with the premise, and please... I would appreciate it if you would refrain from haunting me for it. 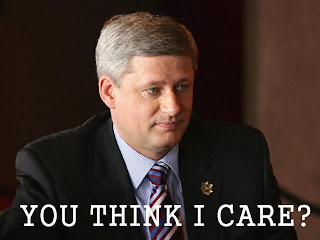 Once upon a time- of all the good days in the year, Christmas Eve- Stephen Harper sat busy in his offices on Parliament Hill, lording over the country, devious in his political tactics, plotting the destruction of his political opponents as he did each and every day of the year. It was cold, bleak weather outside- this was Ottawa, after all, and winters were usually harsh and biting.
Outside his office door, he could see his Minister of National Defence working away at a desk, always where he could keep him in sight. Peter MacKay had once sold out his party to the dark forces Harper commanded, and had a tendency to regularly put his foot in his mouth. And so Harper believed he had to be watched carefully. MacKay sat quietly at his desk, trying to write a speech for the Christmas season that would deftly avoid the government’s appalling lack of care for returning veterans.
There came two visitors at the door, and Harper frowned to see them both. For they were the very political opposition he craved to destroy. The first was Bob Rae, the interim leader of the Liberals. The second was Thomas Mulcair, the leader of the New Democrats. Both of them looked excessively cheerful, and Harper reminded himself to have his minions prepare new attack ads.
"
Harper frowned even more. He did that quite often. “Are there no prisons?”
“Plenty of prisons,” Mulcair replied. “Your Minister of Justice keeps building too many of them, though the crime rate in the country keeps declining, but that might be a matter best left for the House after the Christmas recess.”
“Are there no workhouses? No debtor islands I can banish them to? Are there no monuments to me that they can build?” Harper sneered. “I have no wish to make merry, let alone make idle people merry. Especially if they vote for you.”
Rae appeared offended. “Prime Minister, some of the most vulnerable in society might well die if we fail to live up to our responsibilities.”
“Then let them die. It would decrease the surplus population,” Harper noted.
Rae and Mulcair stared at the frowning Prime Minister, saw that it was pointless to continue, and withdrew from the office. Harper hoped that they didn’t have a recording of the conversation. That whole surplus population remark might come back to haunt him in a future election campaign, after all.

At length the time came for shutting down the Prime Minister’s office for the day, and the Minister of National Defence came into his lord and master’s offices. “Your annual Christmas video message is in the hands of the press now, My Lord,” Mackay informed him.
“Yes, yes,” Harper said wearily.  “Remind me to have the spin doctors create some new attack ads on Rae and Mulcair. I want them on my desk by morning on the 26th. I don’t care if they have to work through Christmas dinner to do it, just that it gets done. They dare come in here talking about Christmas spirit and making merry? Bah humbug!”
“Um, sir, you may want to choose a different saying. Either you, or the man who’s writing this. After all, you never know if the descendants of Charles Dickens might take offense,” Mackay noted. “Perhaps Bah Shawinigan might be a more suitable expression.”
“Bah Shawinigan? Man who’s writing this? What are you talking about?”
“Well, there’s a school of thought that suggests that none of this is really happening,” Mackay explained. “You see, in this theory, there’s a man at a computer…”

“Oh, not the Fourth Wall again! I won’t have that nonsense going on in a country I lead. You’ll put all such thoughts out of your mind immediately, is that clear? Now then, you’ll be wanting tomorrow off, I suppose?” Harper asked.
“If quite convenient, Your Excellency,” MacKay replied, looking as meek as ever.
“It isn’t convenient, and it’s not fair,” Harper replied, sneering in contempt. “If I docked your pay by five hundred dollars, you’d feel quite out of place. Just consider yourself lucky I didn’t send you to Afghanistan for the fourth year in a row for the holidays to cheer up the troops. Oh, well. Just don’t say Your Excellency or My Lord in front of reporters. We haven’t passed the Removal of Rights and Freedoms Act yet, and I can’t have them starting to sniff around until we’re ready to outlaw the press.” Harper walked out with a growl, meeting his driver and RCMP escort as he passed through the halls of the gloomy old house of Parliament.

Christmas Eve night came for the grouchy Prime Minister, settled in at his official lodgings at 24 Sussex Drive. Stephen Harper sat down for a time in his study after dinner, brooding, thinking of making more cuts to corporate taxes and removing even more environmental regulations. “Bah! Shawinigan!” he muttered to himself.

Lost in thought, he gradually became aware of the sound of clanking chains, far below. He wondered if it might be his wife, or their children, playing some prank in the house… and then it came through the door, a ghastly pale apparition. He could see through the spirit, which was wrapped in chains and wore a suit and odd glasses. It was the spirit of his mentor, the man who had led his neo-Con party long ago, when they had called themselves the Reform Party. 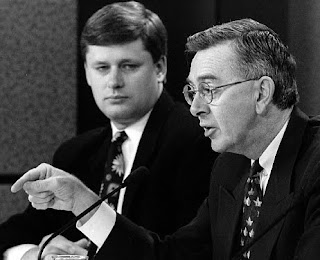 It was Preston Manning. But that made no sense. Preston was alive and well, and still writing opinion pieces in the newspapers. Had mighty Preston fallen ill, and no one had told him? No, that could not be. If he had passed on, his great mentor would have rated nothing less than a state funeral. Behind the glasses, his eyes were deathly cold, and he stared at Harper with a mournful, appalling expression clouding his face.
“What… what do you want with me?” Harper asked.
“Ask me who I was,” the spirit answered.
“Well, you can’t be who you look like. Preston Manning is still alive.”
“Yes, indeed. Let’s just say that through writer’s license and the fact that I’m the only mentor you have, I’m a ghost travelling back through time to warn you against the path that I chose. Or I could be that final piece of his soul not yet corrupted, paying you a visit from beyond his body. You don’t believe me.”

“This makes no sense, so of course not,” Harper told the spirit. “You could be just a bit of undigested meat that’s acting up. Note to self: find a way to blame that on the Liberals. This could be little more than a dream. I mean, whoever heard of ghosts travelling back in time? And what is that you meant by writer’s license?”
“Well, you see, none of this is actually happening,” the spirit remarked. “There’s a man at a computer…”
“Oh, shut up. Bah, Shawinigan! What is it you’re here for anyway? Is this some sort of trick my political opponents are playing? If it is, my wrath against them will be terrible. Revenge is mine, sayeth the Prime Minister, and I shall repay.”
“Will you shut up?” the spirit angrily demanded. “Now listen… I have but little time. This night, three spirits will visit you. They will attempt to turn you back from the path I chose. You must listen to them. It’s too late for me, but you might still turn away. You can still save yourself. Without their visits, you cannot avoid the path I tread. Listen to them, Stephen. Save yourself from my fate. Be a better man. Mercy, compassion, charity… these are not political talking points. These are the ideals we should live by. It’s too late for me, but oh, well, such is life, or death, or whatever. Now then, my time is almost up… so I shall only say, next time you see Deb Grey, give her a big sloppy wet kiss for me.”
The spirit floated to the nearest wall, passing through it. Harper stared, watched him go, and shook his head. He examined the study door, which was locked. No one could have passed through. He shook his head once more, and muttered, “Bah! Shawinigan!” 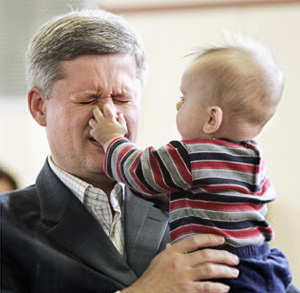