Before I get to things today, I thought I would point out an interview I did over at Penelope Crowe's blog Hot Books Daily. With the primary writing for Heaven & Hell finished (check out the blog marked Reaching The End of the Line over there to the right if you haven't read it yet), I answered some questions on the process of writing it. Check it out, and comment!

Now, onto the mischief at hand today....


Some of you might be puzzled by the blog title I've gone with today. You might be asking yourselves... St. Crispin's Day speech? What is he talking about now? In response to that, I must shake my head in dismay and roll my eyes. I must, of course, dismiss you as an uncultured barbarian if you have no idea what that means.

I have a great appreciation for the works of the Bard, of course. William Shakespeare, for you uncultured barbarians who don't get the St. Crispin's reference. I've seen a good number of the plays on stage and screen. My personal favourites among his works have to be Twelfth Night, Hamlet, and Henry V. That last one is, of course, where the St. Crispin's Day reference comes from. To introduce you uncultured barbarians to it, and to refresh your memories to those who know it, I give you Kenneth Branagh's take on the speech. After that particular rallying cry, I'd be following him straight into the gates of hell.

Incidentally, watch closely for a very young Christian Bale in that clip.

This brings me to the other half of this particular blog. The series Due South was a personal favourite when it was on the air in the 90s. It was a fish out of water police comedy-drama, taking a Mountie (Paul Gross) and placing him in Chicago. The final episode, Call Of The Wild, featured a skewed take on the St. Crispin's Day speech, delivered by the late great comic actor Leslie Nielsen, who occasionally turned up on the series as a veteran Mountie. Given that today is, in fact, the Eleventh of March, it's entirely appropriate to present to you this twisted rallying call to arms. Enjoy it!

With that, I give you the Eleventh of March speech. 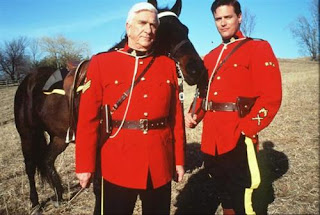 Posted by William Kendall at 11:46 AM