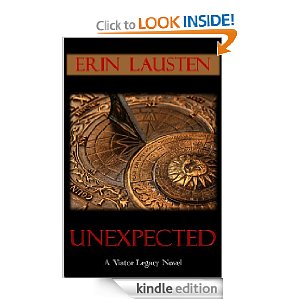 “There are a number of safeguards that have been in place for thousands of years to prevent our people’s existence from becoming common knowledge. You will learn more about these as time goes by.”
A warning early on in Unexpected, the first in a series of time travel science fiction novels by the author Erin Lausten. I recently read the book, and came away from it thoroughly enjoying the final product. Time travel as a theme allows for many possibilities, whether the medium be a novel, television show, or movie. In the genre, there are usually rules to be followed… sometimes bent, but not to be broken. And typically the means of accessing time is through some form of technology. Unexpected offers a different means of travelling through time, giving the reader a sub-species of humanity who can shift themselves through time at will. They are the viators.
The book introduces us to Hailey McIntyre, an office worker in the contemporary world who has a run-in while on her way to work with a drug addict. The situation goes from bad to worse when he opens fire on her and her friend… and then she comes to somewhere else. And somewhen else, to be precise. She finds herself in the past, on a pirate ship at sea, and in a world of trouble.
The other main character, Derian , is introduced in short order, and the world he inhabits is quickly shown to the reader. Hundreds of years old, Derian is still in the prime of his life, a legend among viators, the time traveler humans who are a distinct subspecies, slow to age, hard to kill. They’ve been having troubles of their own, with disappearances and hints at rogue operations among viators. Derian is dispatched after an anomaly being picked up in the time stream by his colleagues. The anomaly is Hailey herself, an unregistered time traveler, and Derian goes in pursuit. He quickly learns that Hailey is capable of doing things that most new viators, let alone some experienced ones, can’t do. Hailey seems to be something entirely new of herself.
The novel follows the story of these two characters and a handful of others, on opposing sides in a growing conflict between viators and rogues. Among the first of that set are Derian’s friends and colleagues, particularly Lucius, Magister of the viators, and Roderic, an amusing Scot viator. The latter include a pair of sadistic villains, Nikanuur and Carlo, both of whom are memorably cruel, and one of whom has a personal stake in the matter. A wild card thrown into the mix is Poppi; she’s something of a solo act, rather off kilter at first, but ultimately one of my favourite characters in the novel.
The chemistry and storyline between Hailey and Derian is the foundation of the novel. Hailey is a firecracker, a real spitfire. She has attitude and sass, and real courage. She comes across in the novel as someone with a very distinct, genuine voice and a feisty personality. I liked her tremendously. Derian, the experienced operative, has something of a brooding Darcy-ish feel to him, and I liked his sheer determination and drive. The chemistry they share is obvious from the start; there’s a mutual attraction, and Lausten wisely gives that its proper pace.
The novel takes its characters across the seas of time, into multiple eras. Information is given out gradually at just the right time, and the pacing of the novel is spot on. There are action sequences and quiet moments interspersed throughout, and the narrative does a fine job tweaking the conventions of the time travel genre. I enjoyed Unexpected tremendously, and I look forward to future books, seeing where these characters travel to next.

Unexpected can be found among other places at Erin's Amazon.com page, where you'll also see some of her other work. She's busy continuing the Viator series, and you can follow her at her own blog, Erin Lausten.
Posted by William Kendall at 11:15 AM