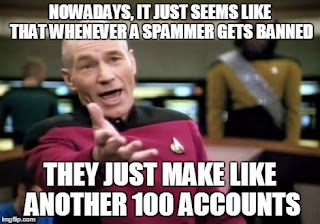 You can block their email addresses to no end. They just show up in your junk email three days later with the same crap and a brand new email address. You can report perpetual spammers who actually do sign a name to their comments (unlike spammers who remain anonymous and yet want to get in touch with you in their comments) in your spam comments files, and yet those same spammers keep coming back around, leaving one wondering if there's much of a point in reporting at all. Yes, the spammers are an irritation of the first magnitude, more obnoxious than the flesh eating virus. And then there are their cousins once removed, the internet scammer, sending out grammar-challenged emails to millions of people with the hopes of landing someone gullible enough to believe complete strangers want to give them huge amounts of money. Such as the following. 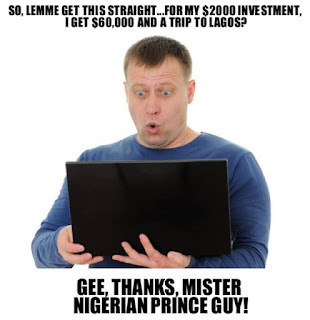 My name is Jason, a Trader, Auditor, Mentor, Investment Manager, Logistics Expert and General Business Man. I contact you in respect of establishing a business relationship with you.

There is a certain amount of money that belongs to me. I intend to take the money out of Germany to another location and bring back the money on a later date for investment and my own personal use. I made this money in the course of auditing a big Oil Firm in Germany and discovered this money as some excesses.

When I discovered these funds, I discussed the issue with the Company's accountant General as well as their personal relationship banker/adviser. This company in question is a very huge company and has been doing business for a very long time, since 1950s.

You may now understand why we need to sanitize this money by having to take it safely out of the country before spending it. Here's our plan, we intend to get a neutral individual who is willing and able to receive this money in form of investment funds to be used by the individual in infrastructural projects, real estate investment or trade etc.

This is just to get the funds out of The Bank where it is presently, to the receiver's bank only. However, the deal is that the funds would be shared into 4 equal places and each of us would be entitled to equal parts of the funds after you receive. I'm talking about Me, You, The Company's Accountant General and The Senior Officer at The Bank who is their personal relationship banker/adviser.

We do not require any complicated paperwork or lawyer agreements etc to get this work done. Our agreement would be between 4 of us only as we require utmost confidentiality in this matter. You do not have to tell your bank the details being given in respect of these funds. All we require from you is your willingness and ability to receive the funds in question.

With all these in place, The Bank will initiate wire transfer of the funds to your account. We expect that we act according to the agreement we shall get to in respect of this. This isn't a risky operation or money laundering. Its just a simple opportunity which we intend to exploit using an absolute stranger.

Let me know if this is something you would like to be a part of. If you have any questions, please ask. We would be very glad to move forward on this immediately but require utmost and absolute confidentiality. I'm very willing to furnish you every information you might require so long you promise not to betray privileged information getting to you as a result of this communication.

Thanks for your time. I await your response. 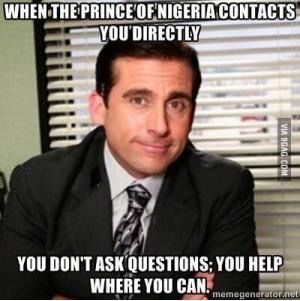 Well, well, well. Where do we begin? Perhaps with the name- Jason Flatt. If you Google that name, you come up with two items of note. Posts about an internet scammer are in the minority. Most of the items that show first are about a young athlete who committed suicide.

Yes, our scamming scammer just happens to be that tasteless.

Spelling isn't as much an issue as you so often see with these scam emails, but there are other tell-tales. Way too much capitalization where it's not needed- "Me, You, The Company's Accountant General and The Senior Officer at The Bank", for example. And some of the phrasing just feels off, as if we're not actually dealing with someone whose first language actually is English. Which this person is not.

He claims the usual- big amount of money he wishes to share with a complete stranger, money he found that just happens to be floating about in a company's coffers that he's been auditing. He doesn't mention how much or which company, mind you, he just says it's been in business a very long time, "since 1950s". He claims he wants to take the money out of Germany safely (as if money's not safe in Germany), and that "we need to sanitize this money". Excuse me? Sanitize the money?

The only people who talk about sanitizing money are money launderers. 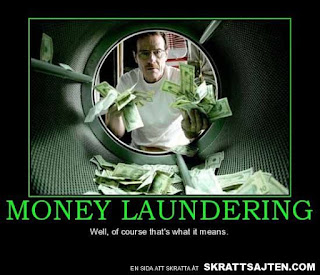 Oh, he claims this "isn't a risky operation or money laundering" while explaining his technique of trying to coax the gullible into going along with this. And then he says what is, with the exception of one word, about the only honest thing he says in this whole con job: it's "just a simple opportunity which we intend to exploit using an absolute stranger." Remove using from that phrase, and their mission statement is clear: "a simple opportunity which we intend to exploit an absolute stranger." The absolute stranger in this case being the dimwit who actually buys into this attempt at a con.

I've got a better idea. Why don't we take you in a helicopter somewhere far up north, far from any settlement, deep in grizzly country. We can drop you off with just the clothes on your back and fly away. Let's see how long you last.

My expectation is that you'll be a fast lunch for a bear inside forty eight hours. 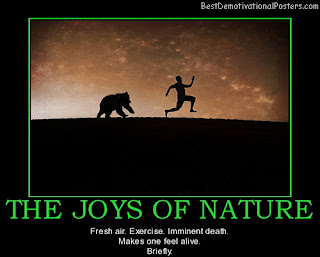