Dick Cheney And The Scammer Brigade 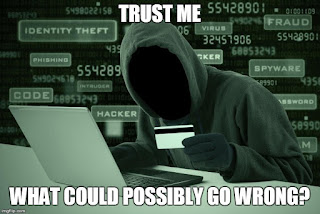 No matter that they're ignored, deleted, and treated like garbage, they never stop: the spammers and the internet scammers. They attempt to leave comments at our posts or send us junk email for things we don't like. Spam filters usually catch the lot of them, but not always. I check my junk folders just in case- periodically things that are not spam end up as such. And sometimes spam ends up getting past the filters and getting published as a comment. Not for long though- the moment I see it, the faster it is disposed of in the inferno of the spam folders where it belongs. And every once in awhile, an attempted internet scammer email shows up. Such as this short one, which found its way to my email account some days ago. 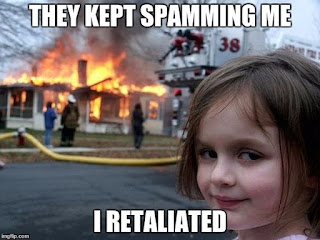 Hello Dear,
This is to officially inform you that a total of $ 3Million USD has been donated to you by Halliburton Company.The Halliburton Company, an American multinational corporation, is one of the world's largest oil field service companies, with operations in more than 80 countries. You have been selected as one of the STAR prize winner.
Kindly contact via Email: claimscenter0299@gmail.com Send your Name, Tel number: and Address to proceed.
Thank you.
Mary Mansfield 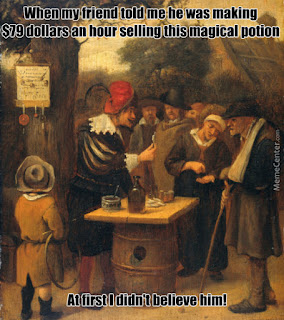 Ah, yes, some of the hallmarks of the traditional homo sapien scammeritus annoyingus. The overly familiar greeting starts it all off: "Hello Dear." This from someone I've never met, taking liberties with me already. First off: nobody calls me dear. Least of all a total stranger trying to swindle money out of me. Second, it's called capitalization rules, dumbass- there's no need to capitalize dear.

Capitalization is an issue throughout, with words that are capitalized that don't require it, as well as spacing and punctuation issues, all hallmarks of the scammer. Spelling isn't as big an issue as I've seen with other scammers, though winner really should be winners.

But then there's the claim about Halliburton. 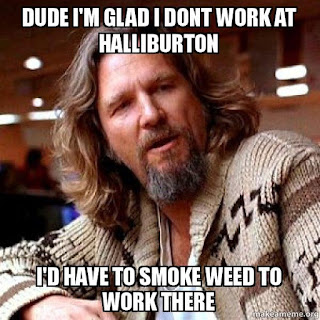 A company that's made a killing for decades off of pillaging, destroying, taking, and war mongering is going to "donate" three million in US currency to me? A company that embodies the very essence of what most people find utterly repugnant? A company that savaged civil rights and enabled the dark side of the Force mentality behind those who brought you the Iraq War (aka Iraq 2: This Time It's Personal) all for the sake of the almighty dollar? That Halliburton?

You didn't need to do the Wikipedia copy and paste job either, Mary. We all know what Halliburton is.

This guy helped them make a bloody fortune back in the day. 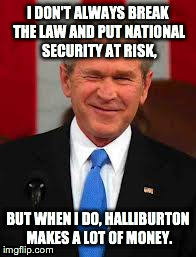 Yes, Halliburton. The oil multinational firm of eternal darkness that profited handsomely off of the Iraq War. Home for many a year to Dick Cheney in between Administration jobs, where he was CEO for a time, and where he cast his baneful glare out over Middle Earth.

No. I take that back.

That was a grave insult. To Sauron, who at least had lines he would not cross.

Sauron, I apologize. We all know you wouldn't have shot your lawyer friend in the face. 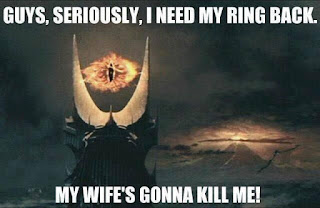 Yes, Dick Cheney, who never saw an opportunity to spew venom that he would pass up on. Dick Cheney, the ultra vindictive, ultra partisan Dark Lord of the Sith who took his lessons in evil from Emperor Palpatine himself and then outdid his master. The former vice president you would never want to go hunting with. The same man who mused that torture was a good thing, that violating civil rights was something to be shrugged at, and who pretty much masterminded the debacle that was the Iraq War. 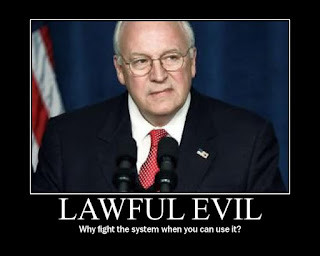 Dick Cheney, lord of darkness and the stuff of nightmares. We're talking about a guy who has already lived longer than he should, courtesy of a donor heart to replace the black void that was there before. Side note to the doctors: that black void is Dick Cheney, and is working on consuming the donor heart, so in about five years, you'll be putting another heart into the evil old bastard's chest cavity, depending on how much loose change from his Halliburton stock he wants to use to buy one.

You're expecting me to believe, Mary, that a company that isn't known for generosity but is known for unbridled greed and a total lack of ethics, a company that's still tight with the Prince Of All Evil, is going around giving out money to complete strangers. 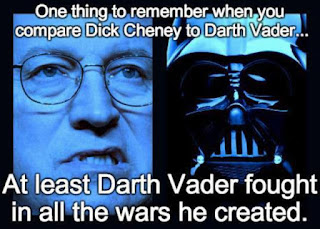 Nice try, Mary. Or whatever the hell your real name is, because let's face it, it's not Mary Mansfield. Mary Mansfield is the name of someone you expect to be running a bed and breakfast in the New England countryside, not spending time trying to scam people online.

Like all of your predecessors in the internet scammer game, you're barking up the wrong tree. I've gotten quite used to your methods and tell tales, and starting off with "Hello Dear" set my Scammer Sense (similar to Spider-Sense) going off full tilt.

Why don't you try this little stunt somewhere else? Like on a hunting trip with the Master of Evil himself? 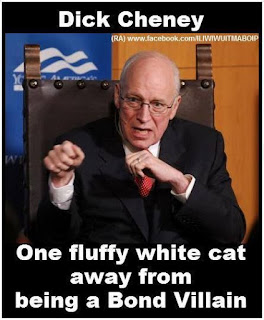