Revenge Of The Washed Up Athlete 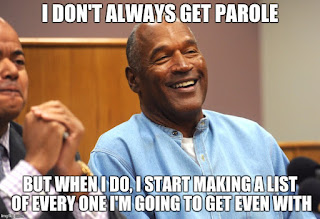 Reno, NV (AP) O.J. Simpson, the former football player turned two bit actor turned occasional TV pitchman turned suspect in the overblown “trial of the century” in regards to the 1994 murder of his former wife Nicole Brown and her friend Ron Goldman, is back in the news. A parole hearing in recent days has secured his release from a Nevada jail in October, a hearing that was noted for the soft ball questions and fawning attitude of the hearing members towards the infamous convict. 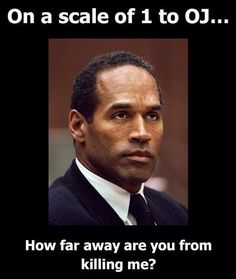 Simpson, who has been doing time for armed robbery at the Lovelock Correctional  Center after a debacle at a hotel casino, has been described as the first reality star, for the way his murder trial captivated the country each day- even if, as a washed up athlete and not very good actor, he didn’t merit the attention. He’s been lauded by some, treated as a pariah by others, and even while avoiding conviction the first time around, didn’t heed enough of a lesson to avoid trouble the second time around, and so wound up in prison for a bumbling attempt to recover his own items.

Now he is soon to be released from prison, a seventy year old shadow of what he used to be, still deflecting responsibility, claiming during the hearing that he’s led a “conflict free life.” The board granted him his freedom as of October in a session highly criticised by some for the lack of hard questions and indulging of the convict. Simpson has spent his time in prison mostly staying out of trouble, aside from a couple of death threats to an unnamed reporter, managing a softball team behind bars, and avoiding anger management courses. 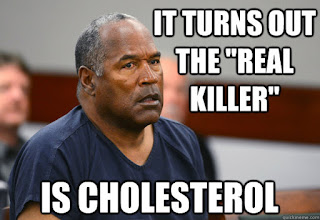 “Damn right I’m ready to get outta here,” Simpson told this reporter by phone from Lovelock. “You got any ****ing idea how ****ing boring jail is? Because I’ll tell you, mother****er, it’s really ****ing boring. No HBO, no access from entertainment show reporters, no strippers, no booze... it’s like they’re trying to keep you in here without letting you have any ****ing fun!”

Asked what his plans were once he gets out of prison, Simpson paused. “Well, first I gotta get back to Florida, because God knows I’m safe there from those money grubbing ****ers who want to take away my money. Yeah, I’m talking about those ****ers who won that civil suit against me. Civil ****ing suit, my ****ing ass! Then it’s what is the Juice gonna do with his time? That’s the big question that every ****ing ****er out there wants to ****ing know.” 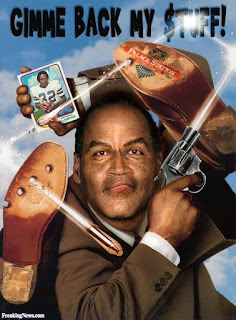 As to the answer? “Well, I thought about getting the **** back into football. Who wouldn’t want the Juice back on the team? Even if I am seventy? I could coach a team! Turns out every single team in the ****ing NFL told me to go **** myself.” This reporter wondered if Simpson was aware of how much he tended to swear. “So then I thought, why not make The Naked Gun 4? Sure, Leslie Nielsen is dead, but you could always have Nordberg as the lead! I mean, what Hollywood starlet wouldn’t jump at the chance to play opposite me? Turns out the ****ing studio told me to go **** myself when I called with the suggestion. Buncha ****ing ingrates. Don’t think I won’t forget being rejected like that when I get out, because I never forget, mother****er!”

Another pause by the one-time star turned notorious convict. “Y’know, here’s what it comes down to. I always said I’d go after the real killer. Which I intend to get to. Right after I find out who really did that armed robbery thing, because let’s face it, priorities, am I right? Which is why I’m announcing today, right here, mother****er, that when I get out, I’m opening up a private investigation firm with my buddy. My pal. You can trust the PI firm of Simpson & Kaelin with your case.” 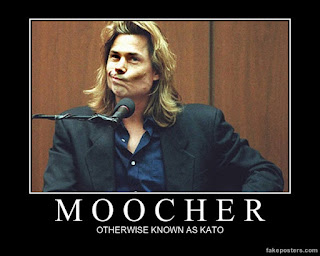 Kaelin, in this case, is Kato Kaelin, the professional moocher and even more obscure reality show figure who was a hanger on and witness at the 1995 murder trial. The failed actor, reality show participant, and radio personality has been scratching out a living for the last ten years traveling to conventions and charging people twenty bucks to hit him in the face. “It turns out a lot of people don’t like me,” Kaelin told this reporter, still looking like the couch surfing dazed, baffled, and perpetually rumpled surfer dude, only twenty years older, that he was during the trial. Though these days, his face looks quite battered.  “Not enough to make me rich, but enough to pay the bills. On the other hand, did you know bruises don’t really heal when you’re being repeatedly hit again in the face two days after the last time?” 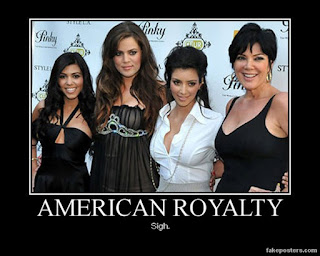 Another hanger-on at the trial, often present in court, was the former wife of one of Simpson’s lawyers. Infamous in her own right, Kris Jenner, the reality show matriarch who’s made a career out of being famous for being famous with her brood of half-wit children, spent a considerable amount of time in court watching the 1995 trial. Her offspring of Kardashian and Jenner narcissists, have spent the last few years getting attention for the sake of getting attention, while avoiding doing anything of particular merit. Kris was smiling in that plastic surgery has limited my ability to smile kind of way when this reporter found her. “O.J.’s getting out of jail! Finally! What a travesty of injustice that he was ever locked up! Think of how I can fit this into the next season of Keeping Up With The Kardashians if I persuade him to move in! Think of the opportunity! Hell, just getting to **** him again will be a lot of fun! Wait, did I say that out loud?” 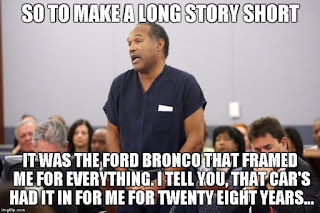 The call was cut short. This reporter sighed and hung up, wondering how long it would take before the disgraced has-been inevitably finds himself back in trouble with the law. Perhaps within two months. 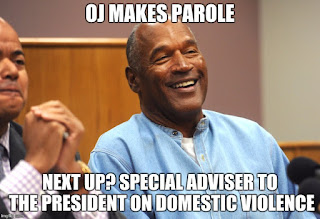