Captain Ahab And The Governor 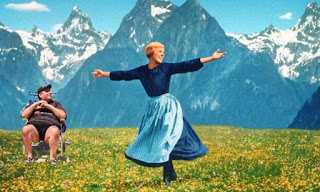 Governor Digs Himself Deeper Into The Sand; Doesn’t Care

Trenton (AP) The embattled governor of New Jersey, Chris Christie, having been term-limited to not run for a third term in the November elections, is facing the last months of his time in the top job under fire. That has increased since the Fourth of July weekend, after the governor closed state beaches and was shown to be spending the occasion with his family on a beach devoid of other people, an incident that has raised outrage against him, lowered his polling numbers even more, and resulted in a deluge of memes making fun of him. 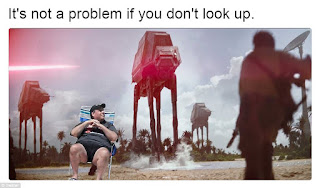 The governor has been dismissive of criticism, both personally and through his staff, suggesting that he didn’t get any sun- noting that he’d been ‘wearing a hat’ after cornered with the photographic evidence. After days of grumbling, snorts, and sneers from the governor, he faced reporters with a statement about the matter at the state capitol.

“First of all, I won’t be taking any ****ing questions from you ****ing lowlifes, understand?” he said, glaring at everyone, sweating like mad, looking like he was five minutes from a massive heart attack. In fairness, he’s looked that way for the better part of a decade. “Second, I had every right to shut down those ****ing beaches on the busiest ****ing weekend of the ****ing year!!!” An aide strode up and whispered in his ear. Christie turned and struck him in the face. “**** off! I know I’m ****ing swearing! Don’t tell me what to do!” 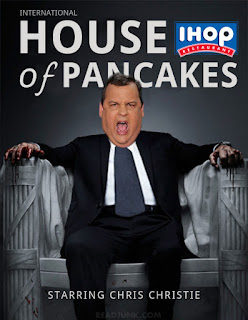 He paused now, clutching his chest for a moment. Reporters wondered if this was the long expected massive heart attack. Then he steadied himself, picked up a hoagie sandwich that had been left on the lectern and took a couple of bites. “And another ****ing thing! I don’t ****ing like that I didn’t get to be the ****ing Secretary of ****ing State! I mean, who gives a ****ing **** if I happened to put Jared ****ing Kushner’s ****ing father in prison? Aside from Jared ****ing Kushner? I don’t care! Do you care? No!” 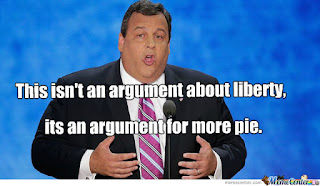 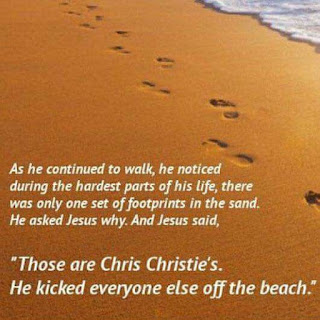 He took another bite out of the hoagie. The second aide was calling for an ambulance for her fallen colleague. Reporters were looking back and forth between both spectacles. Christie continued sweating like mad. Swallowing another mouthful, he carried on. “And another thing! Don’t you ****ing ****ers out there keep ****ing making ****ing fun of me! I’m sick and tired of seeing ****ing memes with my photo set all over the ****ing place! I’m ****ing tired of people comparing me to Moby ****ing Dick!” 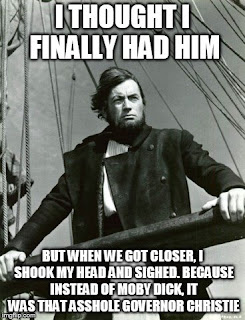 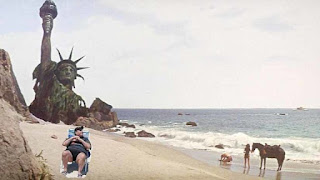 The doors were shut. Paramedics came to retrieve the fallen staffer, who was taken to hospital. Reportedly the police paid a visit to the governor. Assault charges may or may not be pending. Reporters have been speculating if the governor will ever hold another press conference again. Staffers are busy updating resumes and seeking out new jobs.

In a related development, the fall election has seen the arrival of a dark horse independent candidate who’s thrown his hat into the ring. Described as much more articulate and affable than Christie, he seems an unlikely choice for the job, but his supporters hope he can restore dignity to the office. 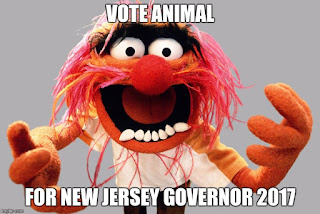