Gollum And The Precious Nomination

Since I had my take on Donald Trump's speech last week, fair's fair and so here's a take on Hillary's acceptance speech this week. 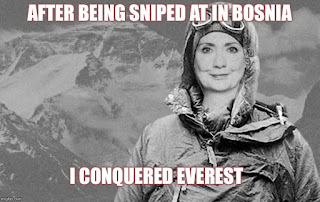 “I must say, basking in triumph like this is very, very satisfactory. It will only be all the more so in November when we’ve won and I finally get to call myself President Hillary Rodham Clinton. And then rub it in the face of that oompa loompa.

Thank you for your confidence in me. I’ve wanted this for many, many years. Longer than anyone can know. We’re so close to the mountain top. It’s just there, that much closer after all the work we’ve done for years and years and years on end. I’m ready to plant the flag on the top. Which reminds me of the stories about who I was named after. You know, you can go on for years thinking you’re named for Edmund Hillary because of his great triumph in reaching the top of the highest mountain on earth... before you realize you were born a few years too early. Oh well, that’s a detail, and sometimes details are things we overlook. 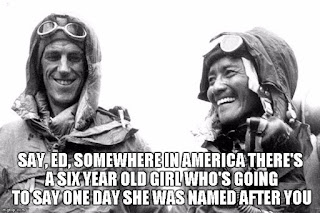 Where was I? Oh yes, wanting this for many years. The presidency is something I’ve been close to for a long time. And I wanted it. Oh, did I want it. I needed it. I had to have it. It was mine, my own, my precious...

I’m getting carried away with myself again.

My point is when I was growing up I already decided to myself that I wanted to be in the White House. And not just as a First Lady or as a Cabinet member or whatever. As the one person making the big decisions. No, not the court jester. Which reminds me, what’s Carville doing these days? 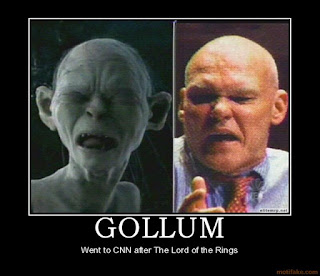 I wanted to be that trailblazer, showing the way to the future, showing young girls that hey, you too can grow up to be the President of the United States. Eventually. After you’ve married a governor who ends up being President himself. After you’ve done time... in the Senate, people, in the Senate! Not the big house, despite what Chris Christie and the oompa loompa think should happen to me. Honestly, Governor Christie, how do you live with yourself? 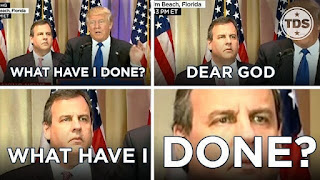 Where was I? Right. After time in the Senate. And then Secretary of State.

But before that came my first run at the nomination. Eight years ago.

Of course the party didn’t see things my way eight years ago. Instead they gave it to the President.

They stoles it from us! Nasty filthy little hobbitses, it was ours! Ours! And they stoles it! 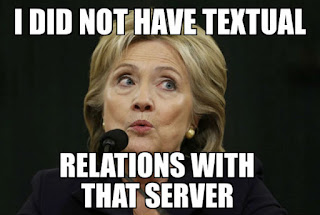 Ahem. Sorry about that. I got a little off track.

So everything I did was about getting myself in place for this great day. Well, this great day and the election day, which will be even greater.

Yes, we managed to get through the Sixties. Like Bill, I didn’t inhale. Though it might have been okay in retrospect if I had inhaled. I might have ended up being a bit more mellow and laid back, and well, kind of human in the way I interact with people. Oh well, at least I don’t come across like a complete robot, unlike a certain Republican I won’t mention.

Marco Rubio, I’m looking at you. 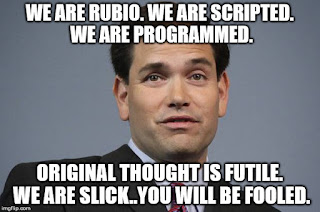 So there we were, getting ourselves established, living like the other half lived, or whatever that expression meant. Making our bona fides known and having a daughter we’re so very proud of and all that. And have I mentioned how pleased I am to be a grandmother? It really works well with the focus groups, even if I can’t knit so much as one of those adorable baby socks you see in all the nostalgic magazines about grandmotherhood.

My precious, my precious... we wants it! 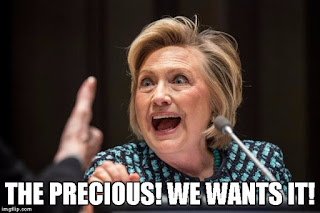 Oh, there I go again. Bill calls it my Smeagol moment. I kind of drift off into imitations of that character, that’s all. And that’s all they are. Imitations! I am not overly obsessed with the Ring of Sauron and I am not deranged and having conversations with myself all the time. There is no Ring of Sauron, and I’m not obsessed with it.

The Oval Office, on the other hand... 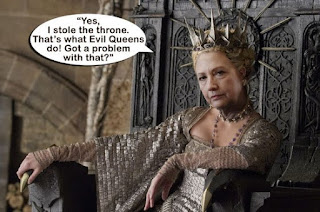 Anyway, I know what the polls say. That I’m one of the most unfavourable candidates in American history. Rest assured, though, that the oompa loompa is even more unlikable than I am. So to the voters out there who haven’t decided, ask yourself this: do you want someone who brings experience and wisdom and the occasional streak of being a bit terribly unlikable in the Oval Office? Do you want someone who’s from time to time been investigated by the FBI like I have? Do you want someone whose party has perpetually asked, are we sure it has to be her?

Or do you want a tiny handed oompa loompa with zero political experience, business disasters, and no social skills?

America, let’s move forward together. We’ve done it before. I’ve done it before, what with forgiving my husband every time he’s gone astray. Which reminds me, to the White House interns of the female persuasion, you won’t have to worry. I’m having Bill fitting with an electro-shock collar that gives him a jolt any time he gets turned on. 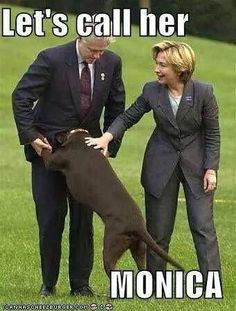 Oh, sure, Bill, laugh now, but you won’t be laughing the first time you get shocked.

Because it’s mine. Mine! My own! My precious! We needs it! We wants it! It’s ours! Nasty Bernies Sanderses standing in our way! It’s ours! 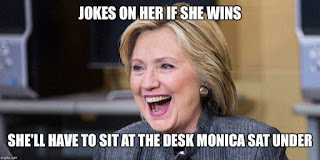 Ahem... there I go again. Sorry. I get carried away sometimes.

Thank you for your support. To those members of the party who wanted Bernie up here, I will do everything I can to gain your trust, even if I have to name the cranky old guy to my cabinet. To the oompa loompa, I say this: Donald, everyone knows it’s a combover.

Now if you’ll excuse me, I see that Bill’s sniffing around the barely legal daughter of the governor.” 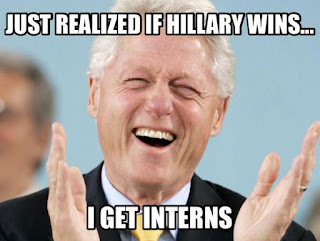