Life And Death In The Death Zone 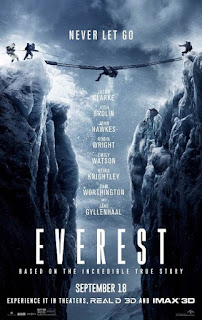 In May 1996, several expeditions were high on Mount Everest, making attempts on the summit on a part of the mountain often referred to as the Death Zone. Things were already going wrong for them when a blizzard fell over the mountain. In its wake, eight people died, five of them on the Nepalese side of the mountain during the storm. The story has been documented before, in Jon Krakauer’s eyewitness book Into Thin Air. An IMAX film, Everest, told the story as well; the IMAX team of climbers had been safe, lower on the mountain during the storm, and took part in the rescue of climbers from the high camps. The co-director of that film, David Breashers, would make a documentary several years later, Storm Over Everest, revisiting the disaster with commentary from the survivors. Now a feature film about the tragedy is out in theatres, from director Baltasar Kormakur. 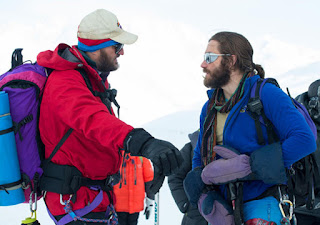 The film opens with the climbing season at base camp underway. Two guiding expedition companies are among the teams looking to climb the mountain. One is led by a New Zealander, Rob Hall (Jason Clarke). He’s promised his wife Jan (Keira Knightley) that he’ll be back home in time for the birth of their baby. The other team is led by an American, Scott Fischer (Jake Gyllenhaal). We meet Helen Wilton (Emily Watson), a base camp manager, Andy Harris (Martin Henderson), a guide, and we meet some of the clients who are paying to be guided up the mountain- Americans Beck Weathers (Josh Brolin), Doug Hansen (John Hawkes), Jon Krakauer (Michael Kelly), and Japanese climber Yasuko Namba (Naoko Mori). The expeditions set out up the mountain, through the dangerous Khumbu Icefall and up towards the high camp, eager to reach the summit. Things go wrong early- there are too many people high up on the mountain, turn-around times are ignored, and the weather takes a turn for the worst. 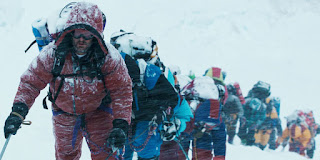 The events of that year are well known- the disaster made extensive coverage in the media at the time, and books and documentaries explored it in the years afterwards. Screenwriters William Nicholson (Shadowlands, First Knight, Gladiator) and Simon Beaufoy (127 Hours, Salmon Fishing In The Yemen, The Full Monty) took those events and fashioned a screenplay on it focusing much of the attention on the two expeditionary teams. Unlike a scientific expedition (the IMAX team, for instance, were involved that year in setting up seismic equipment on the mountain), guided expeditions were the sort of operation that would hire themselves out to anyone with enough money who wanted to tag the top to get them up there (one of the underlying issues of the disaster, too many unqualified climbers on the mountain, particularly at the highest altitudes all at once, and not much respect for the Sherpas who do so much of the critical work at great risk on any given season climbing there). 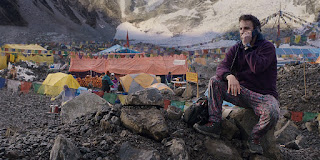 Nicholson and Beaufoy’s screenplay explores that- we see people on that mountain who haven’t earned the right to be there, who are doing it for their own egos. We also see people making mistakes- expedition leaders feeling the pressure to get their clients on the summit disregarding their better instincts, climbers not paying heed to turn around times. The story keeps up the suspense, a formidable thing, considering the audience knows what is coming. Themes are interwoven into the narrative- the hubris of humans, the unforgiving power of nature, and the will to survive. There is some speculation in the screenplay as to the fates of some of these people- in a couple of cases, the bodies were never found, but the way the film presents their deaths doesn’t seem implausible. 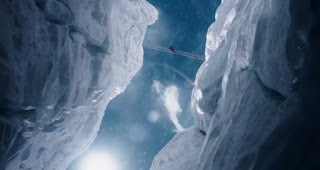 Kormakur is an Icelandic director, with a mix of European and North American films to his name, though this is the first time I’ve seen any of his work. Everest presents quite a challenge for a filmmaker, and he comes through. While some location filming was done in Kathmandu and around the Everest base camp, a good deal of the location filming was done in the Italian Alps, while studio work and CGI (quite convincing in both cases) managed for some of the sequences at the highest parts of the mountain. The doubling of different locations for Nepal (helped along by CGI) works- because let’s face it... no studio would underwrite a film putting actors high up on the actual mountain.

Kormakur does a good job in conveying the tension of the story, even for those who know the outcome, giving the audience a good sense of where the climbers are at any given time. Early on that tension shows itself in the Icefall, one of the most treacherous areas on the mountain, while later it really shows itself during the height of the storm. The gear and clothing have an authentic look- and I like the way the crew conveyed the ferocity of the storm and its effect on high camps and the climbers themselves, both in terms of CGI work and set work. I also like the way the crew conveys height, even on studio set filming- there are sequences throughout the film that will give problems to anyone who doesn’t like heights. It can, admittedly, be a problem keeping track of who’s who, when many members of the cast are hidden beneath winter coats, goggles, and oxygen masks, but everything looks like it belongs up there. And I also like Dario Marianelli’s rich, evocative, foreboding score, a good fit for the ominous mood of the film. It’s a sharp contrast, of course, from some of his other work, such as the 2005 Pride & Prejudice or Salmon Fishing In the Yemen. 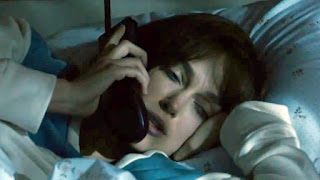 The cast is well chosen, even if some of them don’t get a whole lot to do. Robin Wright (The Princess Bride) plays Beck’s wife Peach, worrying and uncertain through much of the time she gets onscreen- and the character gets an emotional roller coaster as one might expect as she waits on the other side of the world for news. Naoko Mori as Yasuko Namba is an interesting touch- the woman is separated from those around her by the language barrier, and so we don’t get to know too much about her. The real Yasuko had climbed the other mountains in the seven highest in the world, and was eager to cap that with Everest- and yet fate ended up taking things in another direction during the height of the storm. We can feel for her even at the end, and the actress and story take it that way. 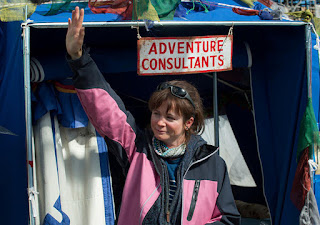 Emily Watson (Gosford Park, The Boxer) gets the most to do of the women in the cast, playing Helen as you’d expect when we first meet her. As a base camp manager, she’s highly organized, quick to adapt, and given the location, it’s a high stress sort of job even if things go well. The character keeps things together (while dealing with the tremendous strain of the situation. She’s something of a motherly sort- ironic, given that many of the other characters are her age. Keira Knightley gets a chance to cry (given the subject matter, totally understandable) as Jan, Rob’s wife, in New Zealand and pregnant while all of this is going on. Her conversations with Rob are poignant and heartbreaking- part of the emotional core of the film. 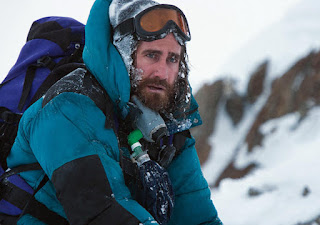 Jake Gyllenhaal plays Scott Fischer in a way that I would expect- ambitious, tough, resourceful, and driven. Scott had the experience to be on the mountain, with climbs on Everest, K2, and other peaks. He comes across as a capable leader- perhaps pressuring himself more than anyone else to get his clients on the summit (one of those mistakes that people keep making as things go along). For all that experience though, Scott was hiding something else that was a problem even before the storm- he was suffering from hypoxia and likely cerebral edema during the climb, which left him lethargic at high altitudes. Gyllenhaal takes these into consideration through his performance, and as the story goes along and things get worse, he really conveys the man’s sense of exhaustion and the notion of a man at the end of it all. 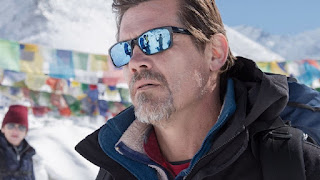 If the marriage between Rob and Jan is one of the emotional cores of the film, the other is Beck Weathers, and Josh Brolin brings the character to life. The man himself provides one of the few positives about that disaster- the sheer willpower of someone literally left for dead at the top of the world, getting up and moving on his own- if there are miracles in this world, that’s definitely one. Beck survived the storm, paid a steep price in physical damage, and yet his spirit stayed strong, and Brolin, who has matured into a strong actor, plays to that, portraying a decent man with an overpowering will to live.  I found myself wondering if Brolin had spent time with Weathers and his family in preparing for the part. 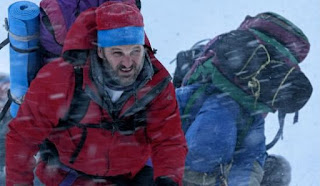 Jason Clarke gets the role of the poignant New Zealander Rob Hall, and it’s a good part to play. The actor’s done a lot in his native Australia, but might be best known to international audiences for roles in Dawn Of The Planet Of The Apes and Terminator Genisys. The real man, lost in the storm high on the mountain, was by all reports a likable, decent fellow, good natured and capable. Having had missed the chance the previous year to get his clients to the summit, he must have been putting pressure on himself to rectify that in 1996. Things go wrong- Doug isn’t listening to those voices of warning in his head, the same voices that tell other climbers to turn back and not push for the summit. And while he has opportunities to descend on his own- to save his own life- his sense of duty to the life of one of his own clients prevents him from carrying that out. Clarke seems to bring all of that to life in his performance, and particularly in the way he and Keira Knightley relate as a married couple- they feel very believable, while Clarke’s take on Rob feels quite true to life. 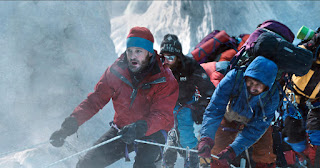 There have been yet more deaths on Everest in the nearly two decades since that disaster. Guided expeditions continue to bring unqualified climbers up to the highest point on the planet. The arrogance of man in the face of nature persists. This, of course, is not a new thing, and there will, time and time again, be yet more tragic deaths on the slopes of Everest. The story of that one climbing season that plays out in this film captures the ferocity of that storm well, demonstrating both the hubris of ambition and the strength of the human will. I found the film both harrowing and enjoyable.

Though if one has a fear of heights, watching this might end in a few years worth of therapy sessions. 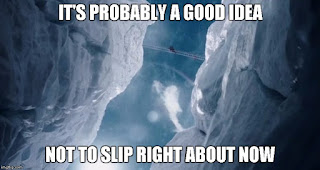 Posted by William Kendall at 8:15 AM