Have a peek over at my photoblog by clicking at the right, since the first day of the month is a theme day for City Daily Photo, and I've got my take on the theme of Shelter.

A few days back, Governor Rick Perry (R-Texas/ Mordor) stepped out of the race for the Republican nomination. This might explain the reason why, in a speech the Governor really ought to make (just to see the looks on everyone's faces, come on, Rick). Incidentally, I'm going to have to give Texas a wide berth after this one. 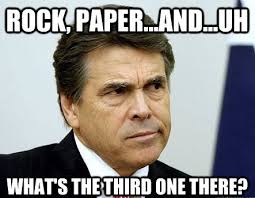 “Thanks for that big ol’ Texas greetin’, folks. Feels like I’m comin’ home, by tarnation, seein’ so many Lone Star State people out here tonight. Lots of guns and Stetsons and boots and guns and did I mention the guns? Yeeeeeeeeeeeeehaaaaaaaaaaaaaawwwwwww!!!!!

Okay, so it didn’t work out. I ran again for the nomination, and, well... this time it didn’t work again. Last time out the party thought runnin’ with a guy named Mitt would be a good idea. And we all know how that worked out. Oh, and there’s the whole problem with me puttin’ my foot in my mouth and not knowing a third thing to think about in an answer. Hey, it happens to all of us. Brain ice... no, wait, brain freeze. It happens. Just happened to me at the worst possible time in a debate, but we can’t change the past now, can we? So no, it didn’t work out that time.

This time? Well, if we thought last time was a circus, this was all the more so. Instead of Jeb and Marco and Santorum- by the way, on the record, Santorum’s a pompous sidewindin’ jerk- we got a loudmouth blowhard- no, not Christie, though that bastard is also a blowhard. No, I’m talkin’ ‘bout Trump, partner. Yeah, that orange New York loud talkin’ snake turned all this into a real circus. 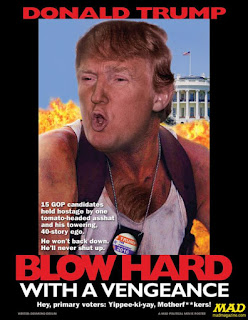 Didn’t help that we already had a crowded field. Jeb and Marco and Ted and Santorum and the Huck and that Carson guy and Carly Fiorina and Christie and Walker and the rest of us. And then the other clowns in the field- Sarah and Michele comin’ outta nowhere with this whole double team goin’ for the nomination, and Hulk Hogan throwin’ his bandanna in the ring and cripplin’ Trump. Nobody was payin’ me the slightest bit of attention, no sir. Three months I went with not so much as a question from a reporter. Hell, could’ve been worse. Bobby Jindal announced he was runnin’ and then disappeared into some quicksand pit, or got eaten by coyotes, or maybe he got caught in that there Bermuda triangle. 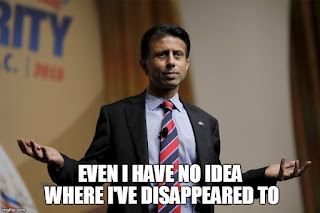 Well, there ain’t no room in that circle for a Texas maverick like good ol’ Rick Perry, no sir. Turns out the party head honchos think a circus is perfectly fine and a maverick cowboy ain’t. That’s to be expected. They don’t want Texas mavericks in the White House no more, no sir! Not after Dubya. What I’ve seen over these last years is that we Texans aren’t respected by the rest of the country. Those elites out there in Washington sneer at us. Yankees laugh at us and make fun of us. Californians think we’re crazy. I just gotta say... no one disrespects Texas.

So it’s done. Those high falutin’ party head honchos don’t ‘preciate Texas. They don’t respect Texas. And so no more makin’ a bid for President of the United States of ‘Merica for Rick Perry. That don’t mean I can’t be President... of an independent secessionist Republic of Texas! Yeeeeeeeeehaaaaaaww!!!!!!! 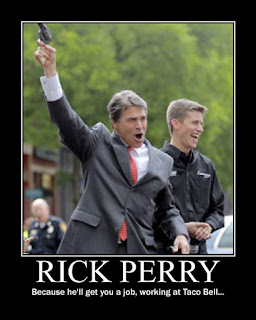 Now think on it, y’all. What has ever trustin’ those feds gotten us? It’s gotten us war games bein’ practiced on our soil as an underhanded cheatin’ way of takin’ us over and takin’ away our guns! And just ‘cause that didn’t happen this time don’t mean it ain’t ever gonna happen, right? It’s gotten us no end of disrespect, and like I said, no one disrespects Texas! We’re the land of God and guns and apple pie and tumbleweeds and crazy weather. We started out as an independent republic, by hell and high water, and we can go back that way. Once our great founder Sam Houston kicked Santa Anna in the seat of his pants, we set our own course. We were proud, loud, and brash, and it took time ‘fore the ’Merican government let us in as a state. So I say we go back and be independent again. As one country, one united Texas! Y’all, I’m runnin’ for the President of Texas! Yeeeehaaaaawww!!!!

Yeah, cheer like that! It’s what we’ve always wanted! A country of our own. Just with a better endin’ than Braveheart, ‘cause between you and me, I don’t want to end up gettin’ drawn and quartered and my head chopped off. 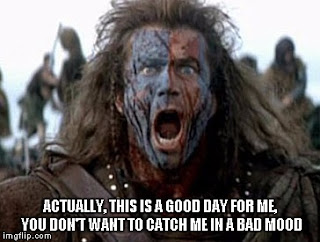 So as of right now, we show everyone we mean business. They ain’t gonna have ol’ Texas to kick around and make fun of, no sir. They’re gonna learn some respect, or they’re gonna learn the consequences. No one messes with Texas! Am I right? Yeeeeeeeehaaaaaaaaawwww!!!!!!

We’re gonna ride hard and shoot off our rifles and show them we’re serious. After all, we don’t want no interferin’ with the way we do things down here, no sir! We’re Texans, and we’re doin’ Texas proud! And when we’re done.... 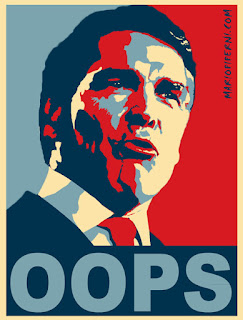 You know what? I can’t do this anymore. I’ve taken this whole thing as far as it can go.

Time for everyone to know the truth.

Particularly about why my voice just dropped that Texas accent.

The truth is pretty simple. You see, I’m not Rick Perry. 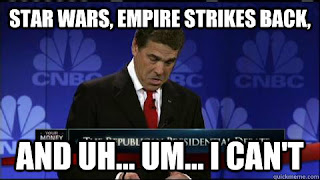 My name is Richard Perry. And I wasn’t born in Texas. I’m from Pennsylvania. Born and raised. Thirty years ago I made a fifty dollar bet with a friend- that I could pass myself off as a born and bred Texan, play the part of a maverick local, and rise all the way to become governor. Jack didn’t think enough Texans would be dumb enough for me to pull it off, but hey, you proved him wrong and voted me back into office repeatedly.

So I spent thirty years carefully crafting my legend, so to speak, building my background up as a Texas boy, working on my story. I wasn’t born to Texas cotton farmers. No, my parents were Alex and Tess Perry of Lancaster. Dad was a lawyer, Mom was in real estate. The people I passed off as my parents were just paid actors in a grand performance piece that’s been playing out for thirty years. 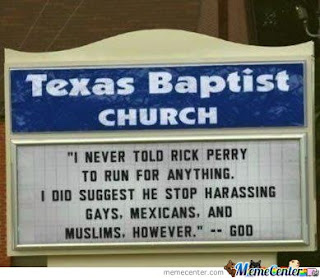 Until now, the only other person still alive who knew the truth is my wife Anita. I mean, it’s kind of hard to lie to your spouse for thirty years, so of course she knew. She found the whole idea amusing, actually. Not so amusing, I’d think, if I’m looking at my chief of staff right now, who looks like he’s having a heart attack.

Well, I know you all must feel pretty angry with me right now. I’ve spent thirty years carefully working to the point where I could make fools of you. But it was worth it. Best fifty dollar bet I ever made. Though I think I’d better exit stage right. Like I said earlier... some of you have guns, and a lot of you look pissed off. In closing, I’ll just say two things. First, Jack, I’m expecting the fifty bucks plus interest over thirty years delivered to me by week’s end. 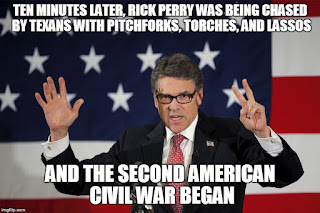 Posted by William Kendall at 8:58 AM