Before I get started today, some links to see to. Norma was back at her blog with a farewell to a DJ. Parsnip had desert wildlife at her page. And Eve had a garden project at her blog.

Today I'm doing something different. Fellow author Lorelei Bell has just released Vampire Caprice, the fourth book in a series. It can be found at Amazon, along with other work by Lorelei, in Kindle format. Lorelei can also be found at her blog Lorelei's Muse. 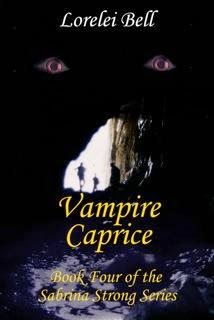 The big vampire, Bjorn Tremayne has lost his reign and
has become a rogue, and this doesn't sit well with him. But he's about
to do something that will change all this. Dark World has set a bounty
on Sabrina's head because she wouldn't mate with him, but he has come
up with a way to trick her into bed with him. He needs to get her away
from the only vampire who protects her--Vasyl.

Sabrina's agenda was to enjoy a pleasant Thanksgiving with family, and
no vampires, Nephilim, werewolves or demons to interrupt it.
Unfortunately a demon in the guise of her grandmother has decided to
attack her at this family gathering.

Bill Gannon, her neighbor and Nephilim, has gotten an invite to
Thanksgiving. Just when he's about to save Sabrina from the demon, who
walks in, kills the demon and whisks Sabrina off in his cool Super
Snake Mustang but Tremayne... with the help of leprechaun Rick.

After the melee in Sabrina's brother's house, Tremayne convinces
Sabrina she isn't safe and manages to talk her into running.

Vasyl, meanwhile, has fought off Tremayne's minions, but in the
meantime has lost Sabrina. It's daybreak and he must hide from the
sun. He has to chase Sabrina across the Midwest, knowing that
Tremayne's ultimate goal is to mate with her--before he, himself has a
chance to consummate his marriage to Sabrina.

In order to complete his duty of finding the sibyl, Bill Gannon must
chase after Sabrina, too, and find a way to talk her into having his
children in order to save the whole Nephilim race.

While all of these men are vying for Sabrina's attentions, something
called an Undead, who feeds on souls, seeks Sabrina--the last
sibyl--for his own diabolical needs. And he is very determined to find
her.