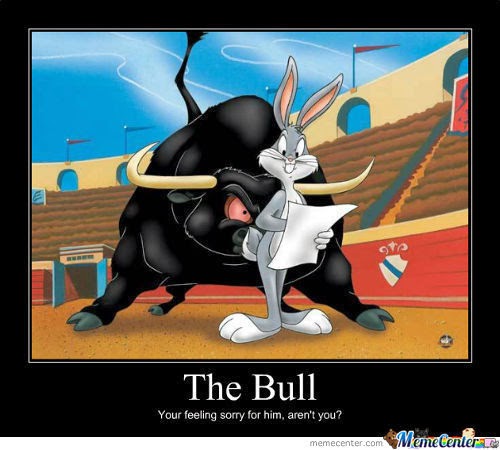 "For shame, Doc. Hunting rabbits with an elephant gun. Why don't you shoot yourself an elephant?" ~ Bugs Bunny

"At wast! The wong awm of the waw is weaching out and cwosing in on you. You scwewy wabbit." ~ Elmer Fudd

"Why it's gettin' so a man can't earn a dishonest livin' no more!" Yosemite Sam

"One thing I've learned while chasing the bird... avoid the dog!" ~ Sylvester

"I know this defies the laws of gravity, but I never studied law." ~ Bugs Bunny 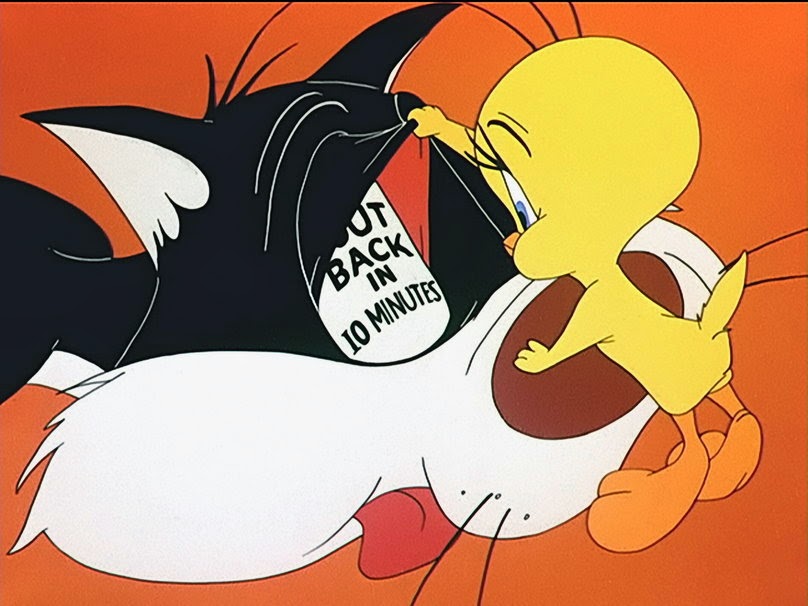 If you've had the pleasure of growing up watching Looney Tunes cartoons, you were a very lucky person indeed. If you didn't, how much of a deprived childhood did you have, growing up without the demented anarchy of Bugs, the Road Runner and the Coyote, Pepe Le Pew, Sylvester, Foghorn Leghorn, and Yosemite Sam?

Bugs of course is the signature character of the franchise, usually annoying Elmer Fudd or Yosemite Sam. Despite the fact that they're usually far better armed, they're the ones who end up exasperated and get their own plans blowing up (literally) in their faces. His smart-aleck mouth, coolness under pressure, and occasional crossdressing tendencies persist in keeping us amused. 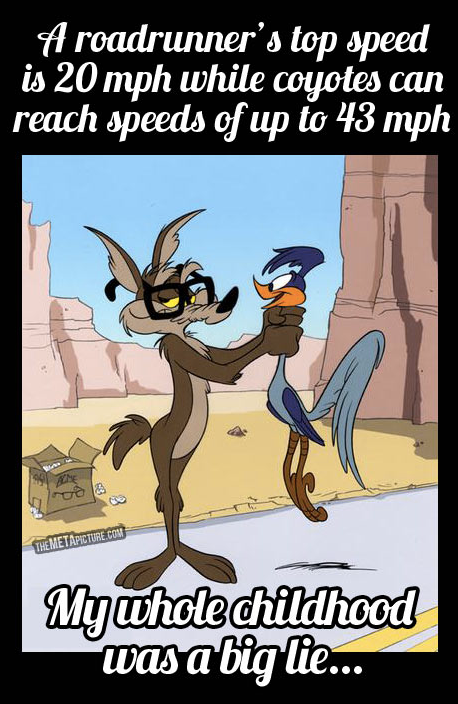 It's a bit hard to root for Sam or Elmer. They're the authors of their own misfortunes, and they're case studies in hair trigger tempers and an inability to walk away when they should know better. They could avoid that rifle backfiring on them, or the TNT they seem to have in plenty of supply blowing up in their faces (just where do they get all those explosives?) if they only set their pride aside and walked away. But no, Elmer and Sam can't do anything that makes sense, after all...

Admittedly, the Tweety and Sylvester toons always struck me as maladjusted. Maybe it's that I'm a cat person- I was always rooting for Sylvester. Maybe it's also that unlike other protagonists, Tweety always  had to depend on others to save him, the dog, for instance, or cranky Granny (was she born with the name Granny?). Yes, I was always rooting for Sylvester to somehow get Tweety. 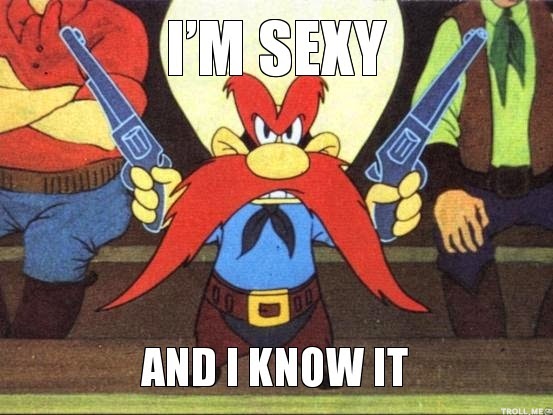 Of course it never happened. Sylvester and his creative voice impediments suffered from a basic condition that afflicts most Looney Tunes antagonists. He wasn't all that bright. Yes, he could be obsessive about getting that bird, but was it really worth it? The bird was little more than one bite big to begin with. All that energy expended to chase down something that's not even snack sized. A smarter animal would say to himself that maybe it's a better idea to just order out or hang around the fish market for dinner. Not Sylvester. That loveable but dumb kitty mostly had blinders on to all but the idea of a Tweety Bird a flambe dinner. 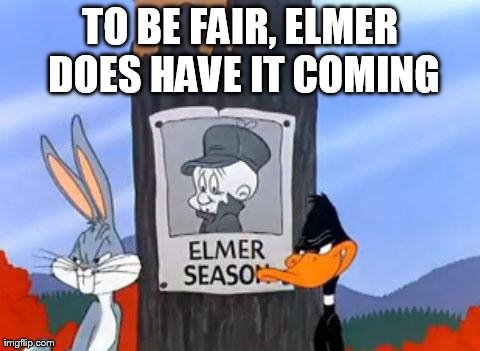 Which brings us to the other bird and predator conflict of these cartoons. The Road Runner and Wile E. Coyote. Unlike Tweety, the Road Runner could nicely take care of himself. That super speed of his was ability enough to ensure his survival. And he didn't prattle on, unlike Tweety. Also unlike Sylvester, Wile E. came across as smart. Here we had a coyote capable of building complex machinery, death traps, and weapons in the middle of nowhere. And he had the financial resources to regularly buy equipment from the ever reliable Acme Company. So yes, he was smart. But he was also obsessed with a bird dinner. So much so that instead of just using those soft skills from years spent in weapons engineering and the financial wealth at his disposal to order out for pizza, he'd go out of his way to figure out some new way to get that Road Runner. 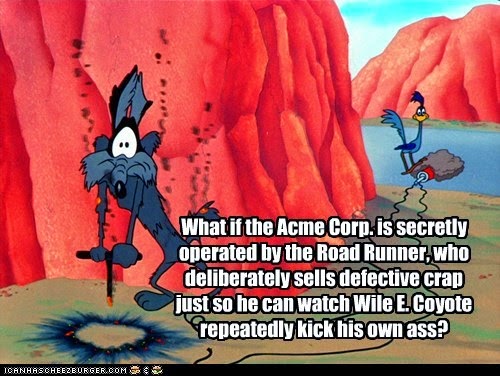 You have to feel sorry for him. Because there were moments when his carefully laid scheme was being laid to waste, and he knew it- and he'd just stare with that helpless look in his eyes as the train was bearing down on him, or the cannon was about to fire on him, or the giant rock was plunging straight down at him.... and you just couldn't help but feel such a deep pity for him.

It didn't help that on those rare occasions when he managed to somehow walk away from nearly getting blown to smithereens by his latest project gone wrong, and was catching his breath and thanking his lucky stars that he was still alive.... that the Road Runner would stop right behind him, feel inspired to be a sadist, startle the living daylights out of him by blurting out "Beep Beep!"... and send him plunging off the cliff yet again. 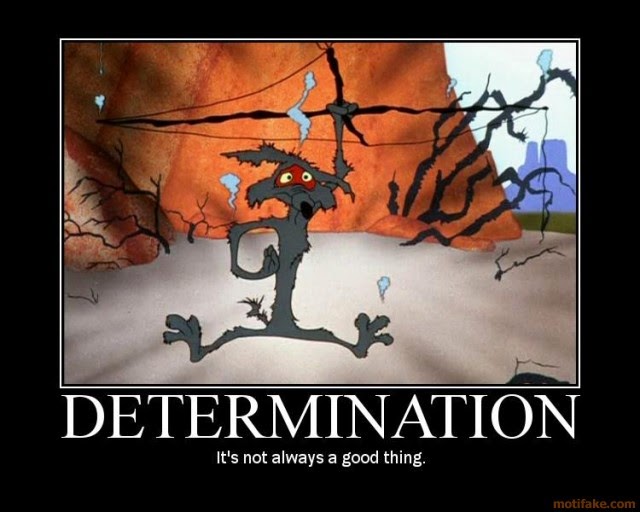