The Sentinel of Liberty, The Spitfire, And The Overly Tanned Cranky Villain 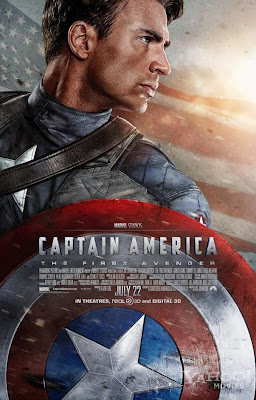 Back in the 90s, I picked up the first in what's become a good sized collection of Captain America comics. It was the first issue of a storyline called Man Without A Country, and it featured the character framed for treason by a nasty piece of work named Machinesmith, stripped of his identity and citizenship, and exiled to Europe, where he had to clear his name and get back to the States just in time to save the President, who looked suspiciously like a certain former Prez who liked cigars, getting "serviced" by interns, and insisting he didn't have any relations with said interns. I'm sure Cap had to stop himself from rolling his eyes while saving Bubbas' miserable neck. 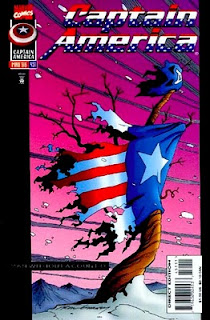 Captain America seems to be, at face value, a tricky kind of character to adapt to the big screen. There's been a previous adaptation from twenty odd years ago that I've seen bits and pieces of on cable, which is profoundly cheesy. We're talking mozzarella, cheddar, Swiss, Gouda, and gorgonzolla crammed together into a giant mountain of cheesiness. It didn't work, for a lot of reasons, among them bad writing, bad casting, bad effects... I'm sure the actors involved in that train wreck would like to forget it ever happened. There's also the issue that a character named Captain America might have problems doing good box office numbers in international markets. Put too much "rah rah pledge to the flag and apple pie" into the film, and it would turn off audiences around the world. Like I said, though, at face value.
Having read the characters' adventures for some two hundred or so issues now, there's a lot beneath the surface. When he's written well, Cap's a man of integrity, principles, compassion, and personal fortitude. He's a soldier who everyone else naturally looks to as a leader. In fact, he's even been at odds with the direction of his country through the long run of the series. Among the challenges of a film adaptation are infusing the core of the lead character with those qualities, and toning down the bombast, so to speak. 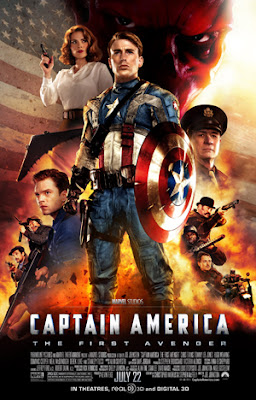 Captain America: The First Avenger succeeds wildly as an adaptation, telling the World War Two adventures of the man who will become the leader of the Avengers. While the film has present day bookends, the bulk of the action is set during the War. Steve Rogers (Chris Evans), is a small, scrawny New Yorker who yearns to join the war effort, but his physical condition seems to doom him to 4F status for the duration of the war. His best friend James "Bucky" Barnes (Sebastian Stan) is about to ship off to the European theatre, and Steve's frustrated. We quickly see him as a principled, decent guy, not willing to back down from a fight, who wants to do his part for the war effort. And while he's talking with Bucky at an exhibition, he's overheard by a scientist, Doctor Abraham Erskine (Stanley Tucci), who enlists him into a project he's working on, the super-soldier program.
Steve goes into training, among a group of other candidates overseen by a gruff colonel (Tommy Lee Jones) and a spitfire agent named Peggy Carter (Hayley Atwell). Though he's the scrawniest of the lot, he's not a quitter; he shows fortitude, ingenuity, and ultimately bravery. Erskine selects him to undergo the procedure, which is witnessed by the brass and a German mole. Steve comes through the procedure, taller, stronger, and faster, transformed into a super soldier. The mole, of course, shows himself and ensures the procedure can never be accomplished again, and after taking him down, Steve finds himself spending his time in War Bonds Hell. It's actually a good touch (musical number notwithstanding). It reminded me of the fact that soldiers who'd won medals for bravery spent time back on the home front, raising money for war bonds and wishing they could be back in the thick of things. Steve has that look to him while on stages across the country in a stage costume variation of his uniform. He feels like he's wasting his time.
Fate intervenes while he's on a USO tour in Europe, allowing him to use his abilities to free captured soldiers from the Red Skull (Hugo Weaving), the earlier test subject for Erskine. The Skull is a cruel, monstrous man whose face is as advertized. He's pure hatred personified, head of a Nazi research arm called Hydra, who has ambitions of his own. He's found a trinket that once belonged to Odin which comics fans recognize as a cosmic cube; it's a nice nod to the comic continuity, where the Skull has, for years, been obsessed with using cosmic cubes. The Skull uses it to power his advanced weaponry, plotting to strike against all of his enemies, aided by his right hand man, Arnim Zola (Toby Jones), who looks, well, much more human then I'm used to (in the comics, he lives on in a robotic body). Cap gets himself a proper field uniform and the familiar round shield, aided by Howard Stark (who will one day father Tony Stark, of course), and gathers together a team of commandoes, including Bucky, to go after Hydra bases in the months that follow, inevitably bringing them all back into battle with the Skull. 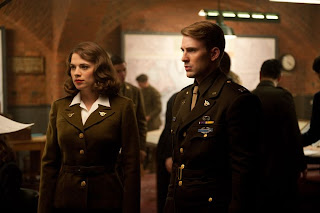 The film succeeds on many levels. The set pieces have a very Forties look to them, in pretty much every detail that we see from buildings to vehicles to the small things that fill up spaces. Even the advanced weaponry devised by Hydra looks retro, conceivably possible for the time. The costuming follows the same sense of detail; the soldiers' uniforms are very much in keeping with the time; the Hydra uniforms have a typically Nazi feel to them, and the Cap uniform as we see it fits the character. It updates the original look from the comics, but still looks very much like the character ought to look. The music, by Alan Silvestri, has a patriotic feel, epic when it needs to be, and just right for the film. The special effects, when used, feel fluid to the action around it, and not apart. The CGI involved in making actor Chris Evans look shorter and smaller then he truly is, is particularly well done. Director Joe Johnson (The Rocketeer, Jurassic Park III) did well with selecting the production crew for this one. The action scenes, particularly a raid on a train and the attacks against Hydra bases, have a real feel to them.
He also chose well in casting. Evans, who's played the Human Torch in the Fantastic Four films, has just the right look for the character. More to the point, he captures the essence of the character, a principled, honourable, decent guy who's out there doing his part for his country, the sort of man who, when put into the heat of battle, will naturally lead. This has to be the sort of person who, in the Avengers film, will give orders that characters like Thor and Tony Stark will follow, and Evans pulls it off. Weaving plays the part of the Red Skull perfectly. He's played sadistic villains before, of course, and here he conveys the viciousness, the sadistic streak, and the ruthless ambition of the character. I'd say the Red Skull performance makes his Agent Smith from The Matrix films look like a real softie, which is saying a lot.

Hayley Atwell's prior acting resume is something I wasn't all that familiar with, but she makes a real impression as Agent Carter. She and Evans have an easy, warm chemistry between them, both before and after the procedure that makes him into a super soldier. She's bright, fearless, and she's got a spitfire personality. She also looks like she'd be right at home in the Forties. 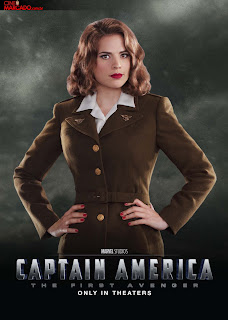 Tommy Lee Jones has been playing grumpy and cranky guys for awhile now, to utter perfection. He's one of my favourite actors, and he has surprisingly quite a lot to do through the film. As is often the case, he gets some of the best lines.
Stanley Tucci has had a long streak of playing different roles as a character actor; he's one of those actors who's often the most interesting part of a film. One of my favourite roles for him was in the criminally underappreciated Undercover Blues. As Erskine, he inhabits a kind, fatherly mentor role, an inherently decent man who's seen the worst side of humanity and finds in Steve someone he can believe in.
Dominic Cooper gets to play Howard Stark, and he too gets a lot to do in the film. He's got a lot of swagger and suave to him, which we can definitely see in his son Tony in the Iron Man films. It's a nice touch seeing it in his old man.
There are a number of Easter eggs, to use an expression, that I liked. One, of course, is the typical Stan Lee cameo, which is so fast that if you blink, you'll miss it. Another is the brief appearance of the original Human Torch at the exhibition, a nod to the fact that Cap and Bucky were part of the Invaders team with the Torch and the Submariner, among others, in the comics, a concept that probably would have been too convoluted to use for this film. And the last is the formation of Cap's team, known to fans as the Howling Commandoes. The most instantly recognizable of them is Timothy "Dum Dum" Dugan (Neal McDonough, who could have played Cap ten or fifteen years ago) in his top hat and handlebar mustache.
The film is really more of an action adventure film then a comic book adaptation. It feels true to the period setting, and has a lot of heart to it. Marvel's been moving in this direction for awhile with the Iron Man, Incredible Hulk, and Thor films, heading towards next summers' Avengers. This film, which ends with something of a cultural shock moment, sets the stage for next summer, and succeeds in presenting us with a Captain America who's not at all flag-waving bombast and fireworks, but an inherently decent man. Go see this film. 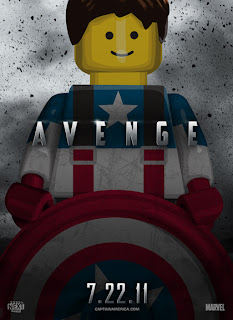 Posted by William Kendall at 6:38 PM