A couple of things left to keep in mind before I write the final words: I still haven't made up my mind just who will speak a certain bit of dialogue in regards to going to interesting places (it'll be whoever feels right for it as I'm writing it). And the final conversation of the book, I think, will only take shape when I get there. I know who has to speak... but the words will come when I get there. I've already experienced that in the writing, and I expect the same when I reach that point. Besides, I can't just impulsively bring in the police out of nowhere to arrest everyone for no reason. That's already been done before.
I can promise you, however, that the ending of the book will not turn out like this. Though I wouldn't mind borrowing one of those to use on my idiot ex-brother-in-laws' car.... 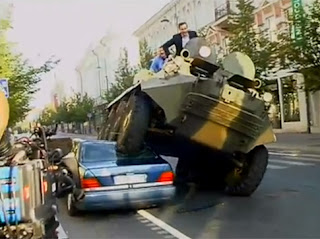 Posted by William Kendall at 6:10 PM

Email ThisBlogThis!Share to TwitterShare to FacebookShare to Pinterest
Labels: Greece, Heaven and Hell