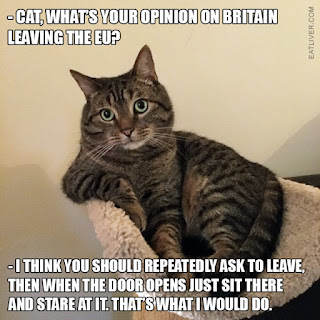 London (Reuters) The Brexit fiasco continues. It has already cost two prime ministers their jobs after a yes vote to leaving the European Union drove Great Britain into turmoil following the 2016 referendum. Entire regions of the country voted against the measure, which some have said should have never even been called for in the first place. Proponents for the Leave side of things, including present Prime Minister Boris Johnson, have blundered their way through things as much as those who were on the Remain side of things. 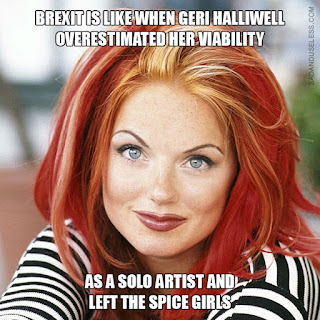 Johnson has only recently taken office as prime minister, after the ousting of former PM Theresa May. He promptly sacked the two time foreign secretary, a highly regarded figure in British society, declared that Brexit would proceed with or without a deal by October 31st, tried to prorogue Parliament, and got slapped down by the highest courts for doing so. Members of his own Conservative party have turned on him, removing his working majority, and the accident prone Johnson has threatened to call an election over the matter. 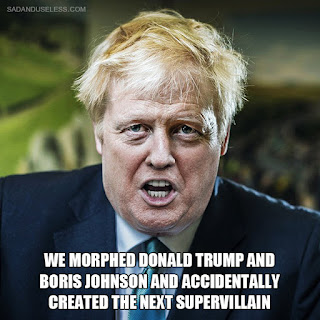 Finding himself with enemies at every quarter and a deepening state of unpopularity among the British public, the perennially clumsy and gaffe prone Johnson is a man under siege. Bets are already being taken as to how long his time in office will last. “Not near as long as May,” is the common word on the street and in the bookie shops. Long odds are being given to anyone betting he’ll still be in the job by the first year anniversary of his coming into it. 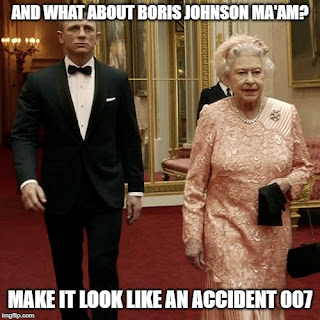 “It’s a disgrace,” Oxford professor of political science Gerald Featherstonehaugh admitted. “This never needed to happen in the first place. Whatever differences the country had with Europe as a whole could have been talked over, negotiated, smoothed out. This should have never gone to a referendum. And now what you’re seeing throughout the country is a lot of regret about the initiative going to a ballot in the first place. It’s almost as big a disgrace as having that foppish jackass in the PM’s office.” 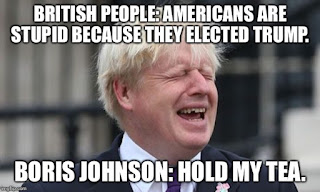 Former PM David Cameron, who led the Remain side of things and saw the referendum go so horribly wrong, agrees. “We made a terrible mistake in even entertaining the idea. We let rogue politicians and isolationist parties get the better of us.  I take responsibility for that. And now we’re all paying the price for a bad decision. The amount of turmoil we’re seeing in the country is a reflection of that.” 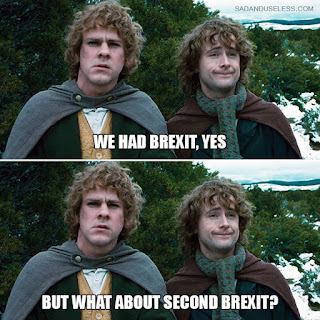 Theresa May was less civil when reached by phone for comment. Apparently still stinging over a forced resignation that ended her time in office, she simply told this reporter, “go **** yourself, *******.” 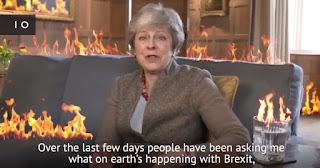 Johnson seemed harried and stressed out when facing the press outside Ten Downing Street. Having had lost his working majority in Parliament to rebel Conservative members, and facing the venom and wrath of an electorate that seems to hate him more by the hour, Johnson is clearly not having a good time of it these days. “Look, the important thing is that all of this is going to work. We’re going to get out of Europe and have our cake and eat it too. With tea and scones. Believe me, when you’re in a situation like this, it’s always best to go into it with no plan whatsoever. And that’s what the whole Leave thing was about in the first place. Having absolutely no plan whatsoever.” 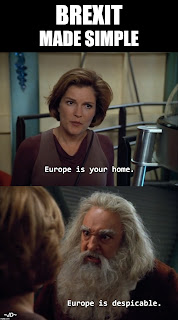 “You realize you said that out loud?” this reporter asked.

“That you had no plan at all for actually leaving Europe when you started this whole thing,” this reporter prompted.

“I did not!” Johnson objected.

“Yes you did,” every reporter said in unison. 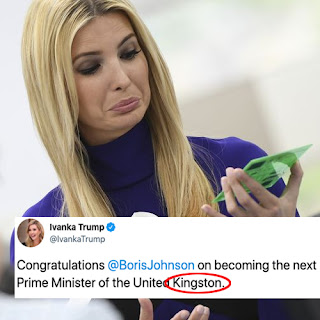 Johnson seemed even more befuddled, looking around, sputtering a bit before backing away from the podium. “You’re all just out to get me! Like everyone else is. Well, I won’t have it, do you hear me? I won’t be treated this way!” He turned around, started back for the door, and got his leg caught in an electric cord, tripping and hitting the ground. A moment later he started screaming and holding his knee and his nose. “Help, help!” he called out. “I got an ow-ow!” 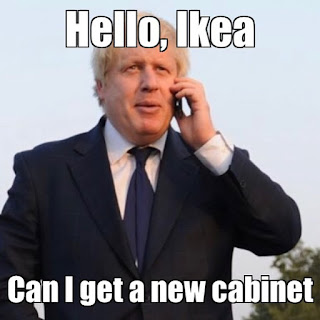 The prime minister was taken to hospital, where it turned out he had indeed broken his left knee and his nose. He was heard to be speculating that his injuries might get him sympathy votes. Not according to the latest polls, which find most citizens want to see him locked up at the Tower of London in the stocks.

“The man is an insufferable jackass and simpleton,” Featherstonehaugh lamented. “We need dignity restored to the office. We need a leader who can come back, who can go to Brussels with heart in hand and just say, ‘we were wrong, let’s get this all sorted out.’ If you ask me, the leader we need is our former foreign secretary. Best man for the job. Dignified, articulate, reasonable, a man of calm nerves and steady mind. But having had been ousted twice already, I don’t see how he’d want to come back.” 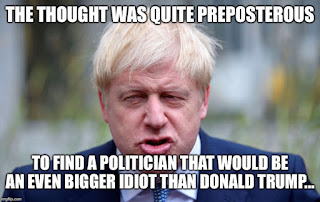 The former foreign secretary was approached by reporters for his own comment. Presently enjoying a life of quiet retirement writing his memoirs at his country estate in Devonshire, the diminutive redhead with the intense stare paused before speaking. 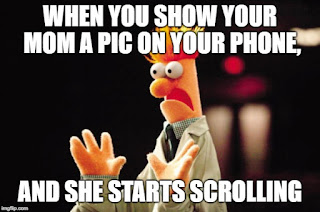