A Day In The Life Of A Leafs Fan

The NHL regular season is about to begin, and the Toronto Maple Leafs, that hopeless and hapless story in dashed expectations, will be hosting Montreal on Wednesday. Perhaps the game will go in this fashion, from the point of view of a die hard fan we haven't heard from in awhile. Oh, and in case you're wondering, Punch Imlach was the coach of the last Maple Leafs team to win a Stanley Cup. Fifty one years ago. It seemed a fitting substitution for a Leafs fan curse word. 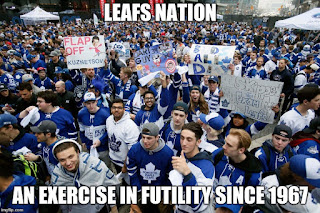 10:12 AM. Awake at home. Got the day off work. Big day today! Big! We’re talking huge, infinity plus one gigantic. Because it’s not just any day. It’s the NHL season opener for our boys. Montreal’s in town, and this year is gonna be the big year! The year the Leafs finally bring the Stanley Cup home where it belongs. Fifty one years without a Cup is a crime! And this is the year it’s gotta happen! 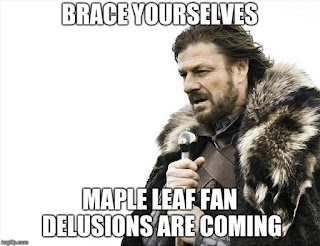 10:50 AM. Watchin’ some of Don Cherry’s Rock ‘Em Sock ‘Em videos to get myself in a fighting mindset. Not that I’m gonna be fightin’ or anything. Unless some jackass Habs fan picks a fight, because if that happens, it’s go time, buddy! Hell yeah! Don’s a genius, man. My mentor, my guide to life. Tells it like it is, pisses off a buncha losers who think he dresses funny. I don’t know why anyone would think that. 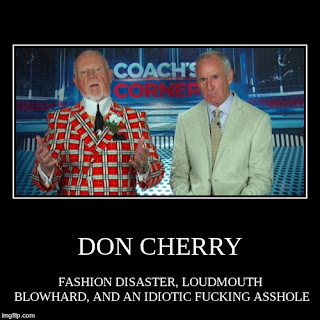 1:32 PM. Had myself a good lunch. That’ll tide me over til burgers at the bar before game time. Okay, time for the Leafs Fan Prayer. Changes by the year, dependin’ on who’s been traded. O Father, who art in heaven with those members of the 1967 roster who have passed on, hallowed be the Leafs, their kingdom come, on Earth as it is in Leafs Nation… 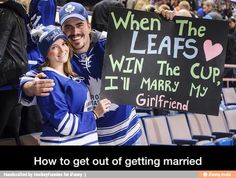 1:33 PM. … and forgive us when we give into despair, for it has been five long decades of dashed hopes and expectations, but this is the year, baby! This is the year, because Tavares has come to join us. So give us the Stanley Cup for the next hundred years, because our fans are really loyal. The Blue and the White is the kingdom, the power and the glory, forever and ever plus one, amen. 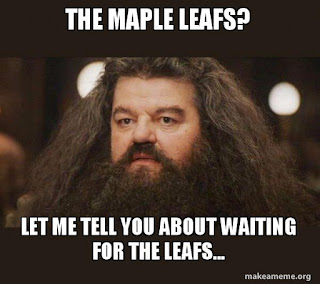 2:47 PM. Another part of the preparations. Call it superstition, call it whatever the **** you want, but we gotta do the stab the voodoo doll thing. I’ve got a doll sized Carey Price sweater, so that’s the one going on it right now. Jabbing it with pins to bring bad luck to the Habs. You know, I do this a lot with visitin’ teams, and it never seems to work. Maybe I should stop or somethin’, maybe I’m bringin’ bad luck to my boys… no, that’s just silly. Gotta work sometime, right? 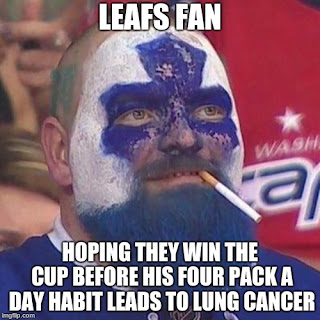 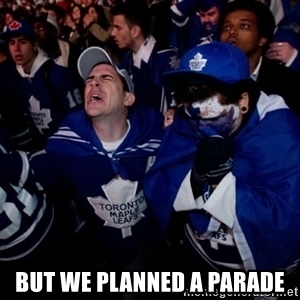 4:26 PM. Me and Harry and Jack are all excited, talkin’ about the big game. Sure, the playoffs were a disappointment, getting’ kicked out in the first round by those Bruins. Man, I hate the Bruins. Almost as much as I hate the Sens. Half as much as I hate the Habs, because let’s face it, hatin’ the Habs is in the lifeblood of every Leafs fan. I tell you boys, our guys have been disrespected and tossed around by the League for too long. But this is the year it’s all gonna change. We’re gonna have Tavares out there with the boys, and he’s gonna show everyone what’s what and who’s who. And this is gonna be the season where the Leafs break all the records and win every single game and claim the Stanley Cup and bring it back home! Because it’s gotta happen! It’s just gotta! 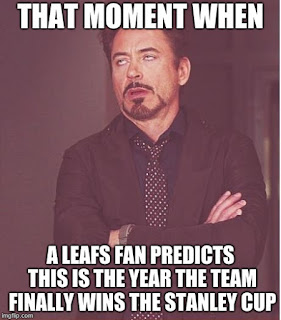 5:03 PM. Me and Harry and Jack meet the cab that’s come to pick us up. ‘Cause we’re gettin’ hammered tonight, and you can’t drive drunk. At least that’s what the law says. You ask me, I’m perfectly fine behind the wheel when I’ve had a few, but my insurance company told me that they’ll cancel my policy the next time. They also think I might have a problem with booze. **** ‘em, the only time I’ve got a problem with booze is when I don’t have any booze. 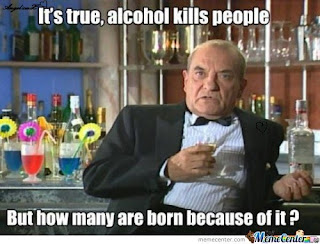 5:28 PM. Me and Jack and Harry are busy talkin’ while this cabbie drives us downtown. Hey, who gives a **** about rush hour traffic, drive on the sidewalk if you have to! We got some drinkin’ to get in before the game! Me and the boys talk about the Cup and the fact that we’re not allowed anywhere near it since we’re still on probation. Geez, boys, all we did was steal the Cup and hold it for ransom, you’d think we killed the Pope or somethin’ by the way we’ve been punished for it. 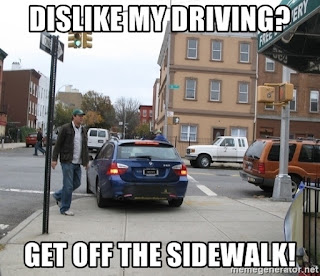 5:42 PM. We finally get into the bar after that stupid ass cabbie drops us off. You ask me, boys, he was a Sens fan. What’s the problem with drivin’ on the sidewalks? The place is busy. Hey, Max! Beer here! 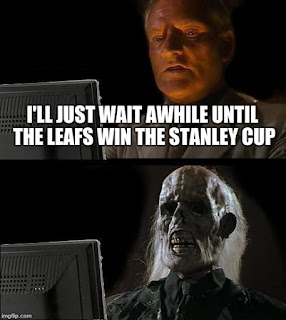 6:39 PM. Comin’ into the arena before the game. Gotta get to our seats. Had a couple beers with our burgers at the bar. Hell, we’ll catch up to that after the game. Hey, Jack, you notice they changed the name of the arena again? Jesus, Punch Imlach, and Mary, why not just keep it as one name? The Maple Leafs Victory Arena? Sounds good, right? Right, boys? 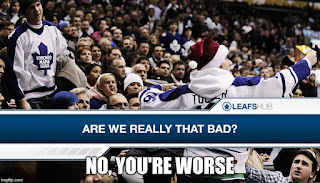 7:03 PM. The teams are on the ice. The anthem is being sung. Me and Harry and Jack are singin’ along. With glowing hearts, the Leafs are best, the true north strong and Leafs… 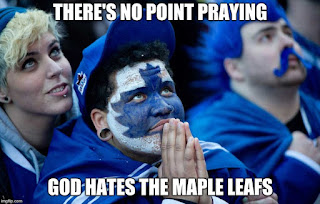 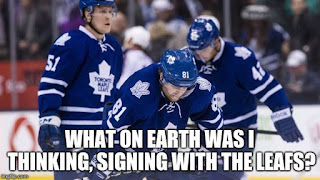 7:19 PM. Totally baffled. First period ain’t even half done and Montreal is ahead of us by ten to zero. Come on, Tavares! Score on that SOB Price already! 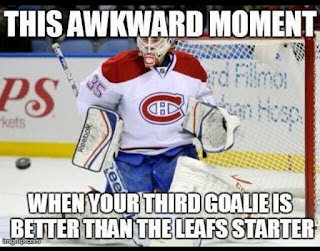 7:51 PM. First period over. Me and Harry and Jack are in shock. Eighteen to nothing?? Boys, you gotta tell me. Is this a bad dream? 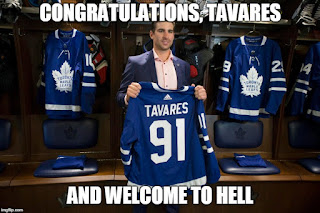 8:28 PM. Busy yellin’ at the Leafs to rally. Come on, boys! It’s only a thirty goal deficit! You can score thirty one goals in a row, right? Right? Move already! No, not like that! Jesus, Punch Imlach, and Mary! Now we’re down thirty one to nothing! Dammit, are you guys blind??? The net’s right there! 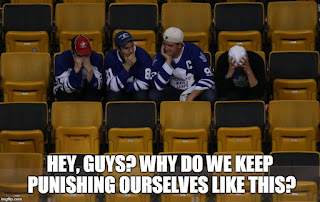 9:41 PM. Last two minutes of regulation. Habs, forty two, Toronto, zero. Boys? This is a humiliation. This is… this is… this is the last straw. You know what? This is us, wastin’ our lives, rooting for a team that’s always going to **** up and break our hearts. You know that? That’s what this is. But **** that, I’m done. You hear me? I’m done! Yeah, Babcock, I’m yellin’ at you! Your team sucks! I’m done! 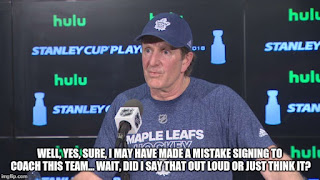 9:56 PM. Me and Harry and Jack come into the bar after leavin’ the arena. Max greets us with the bad news. Turns out the Habs scored four more goals in the last minute of play after we left. Final score Montreal 46, Toronto 0. **** it, Max, a night like this, I need some ****in’ booze to make the ****in’ pain go away. So beer here! 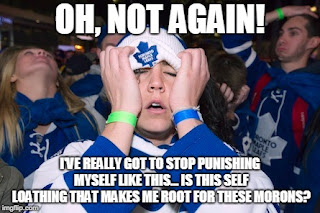 10:49 PM. Drownin’ our sorrows with a buncha Leafs fans, feelin’ the pain. Fifty years, boys! Fifty years of dashed hopes and dreams and watchin’ it all fall apart. My old man would puke if he saw how long it would take! Speakin’ of pukin’, I think I’m gonna throw up. 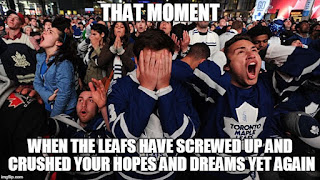 12:28 AM. Me and Harry and Jack have gotten ourselves totally wasted over the last two and a half hours, and we’ve been talkin’. Okay. So this was one bad ****in’ night. It happens. Okay? But whatever we mighta said two hours ago about **** the Maple Leafs and burnin’ our jerseys, **** that. Because a true ****in’ fan sticks with his team through thick and thin, am I right, boys? So that’s what we do. One bad game does not a season make, or however the **** that sayin’ goes. So from here out, it’s gonna be one win after another. Because this is the ****in’ year our Leafs win the ****in’ Stanley Cup! Yeah, baby, yeaaaaaaaaaaaaaaaaaaaaaaahhhhhhhhhhhhhh! 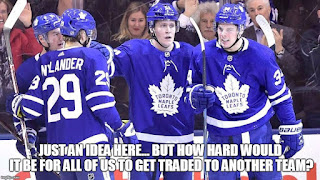 1:36 AM. Staggerin’ in the front door at home. Threw up on the porch. **** it, I’ll clean it up in the mornin’ before work. Maybe call in sick to work. Good idea. Collapsin’ on the couch. Geez, I’m gonna have the hangover from hell in the mornin’. Maybe I oughtta cut back on the drinkin’.

No, that don’t make no sense.

Almost as much as I love the Leafs.

Wake up tomorrow, bud. It’ll be a better day. Every game from here out, our boys make up for tonight. And who knows, maybe I’ll wake up in the morning and find out that it’s yesterday and that whole thing was just a bad dream. That’d be great, right? Of course right. Go Leafs go, baby! Yeaaaaaahhhhh! 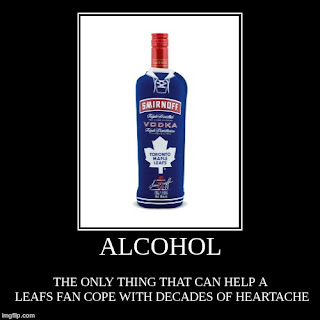