All Hail The New Foreign Secretary 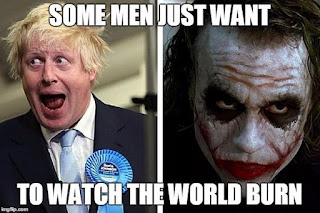 London (Reuters) Life in the United Kingdom hasn’t been the same since the Brexit referendum saw the country narrowly decide to leave the European Union. The results were deeply divisive throughout Britain, and the government has struggled with the Brexit process ever since, trying to come to terms with what it might mean for the future of the country and their relationship with the rest of the continent. It ended one prime minister’s career, and has given rise to the uncertain current occupant of the office. 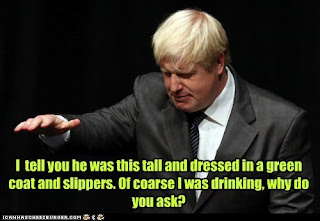 And it has given rise to some unlikely players in the game. Boris Johnson, one of the strongest voices for Brexit, was foreign secretary until his abrupt resignation in July. The clumsy oaf of a politician has risen quickly in the Conservative party since his days as mayor of London. Perpetually looking like he just rolled out of bed, Johnson has often been described as boorish and dimwitted, but cunning in his own way. Pundits have long expected that his every move has been calculated to eventually put himself into the Prime Minister’s job. “Even stupid people can be ambitious,” a Tory insider told reporters on condition of anonymity. 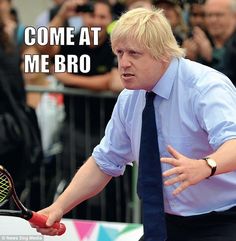 His resignation came after rising tensions between himself and Prime Minister Theresa May over the pace of the Brexit process. Relegated to the status of a backbench MP, Johnson is said to be biding his time, waiting to further sabotage the prime minister as opportunity allows. Leaving Westminster two days ago, he stopped to speak to reporters. Looking unkempt in a wrinkled suit and sloppily done tie, Johnson had that usual deer in the headlights expression of befuddlement to him. And as usual, his hair had the look of a man who had just stepped out of a wind tunnel. 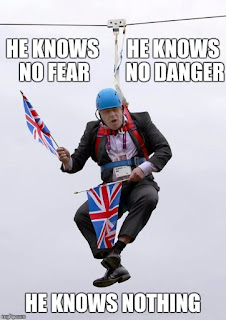 “I should like to deny any allegations that I am attempting to sabotage the fine efforts of that totally inept prime minister May,” he said. “As this country moves forward through Brexit and gives the middle finger to Europe, we need to rally around the leader, and I think we all know that leadership is something Theresa isn’t all that good at.”

“Isn’t it a bit ironic claiming you’re not out to sabotage the Prime Minister and then in the same breath insult her?” one reporter asked. 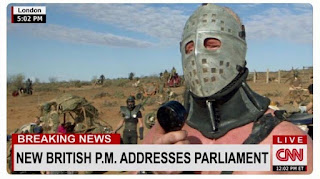 “I have no idea what you’re talking about,” Johnson replied.

“We all heard you. We recorded your statement, the reporter pressed.

Johnson shrugged. “There’s a lot of ways you could fake any statement. Now then, if you’ll excuse me, I’m off. I have to get to my secret meeting of the Take Down Theresa Society, and I can’t be late. You understand how it is.” He turned with a flourish- and stumbled down a staircase, yelling with each impact, finally coming to a halt at the bottom of the steps with his legs out at the wrong angles. “Um…. A little help?” he called in between whimpers. 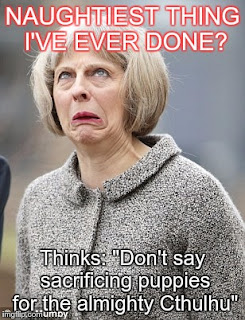 The news of Johnson’s latest catastrophic accident seemed to please the prime minister. Theresa May made remarks to the press at 10 Downing, shortly after being briefed about the incident. “I could easily pretend to be sympathetic about Boris ending up in a body cast,” May admitted with a sly smile. “But you would see right through that. If you ask me, for my opinion on the matter, it couldn’t have possibly happened to a more deserving prat.” 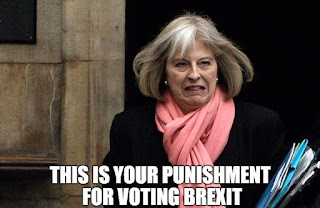 It had been thought for some time that Jeremy Hunt would succeed Johnson as Foreign Secretary, as he had been serving in that capacity in the interim since the resignation. However, the Prime Minister had other ideas. “Mr. Hunt will be taking on other cabinet responsibilities,” she explained to reporters. “But I feel that what we need right now is a calm hand, steady nerves, and the experience of knowing what the job requires. Before Boris muscled his way in, we had a previous Foreign Secretary who was highly respected for his articulate views, his fortitude, his eloquence, his grace under pressure, and his reassuring personality. It was a mistake, a grave mistake, to make him step aside. I should like to rectify that mistake by bringing him back into the fold. He has accepted my offer and I am thankful for that. Ladies and gentlemen, please allow me to welcome back the Foreign Secretary.” 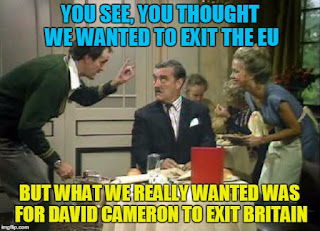 An aide opened the front door to the residence behind her. Out stepped a familiar face, a bit tentative at first. He was looking thoroughly respectable in a Savile Row suit that contrasted sharply with his wild red hair and wide eyes. The Foreign Secretary was short perhaps for a cabinet minister, but tall for a Muppet. He walked forward, joining the Prime Minister. 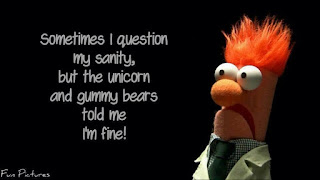