A Day In The Life Of A Drug Addled Mayor

Some links before I get started today. Yesterday was a Square Dog Friday at Parsnip's blog. Shelly was showing off pictures of her new grandson at her blog. And Eve has a book trailer at her page.

Now then, we turn our attention once again to the odious voice of Toronto's crack smoking idiot mayor, Rob Ford. I'm looking forward to the epic temper tantrum when the emotionally stunted douchebag loses the election at the end of October. 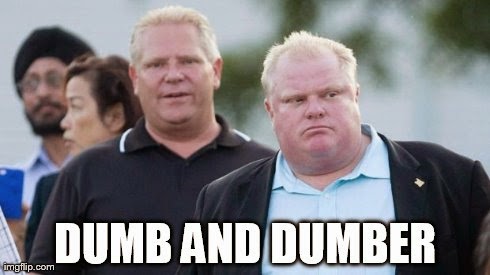 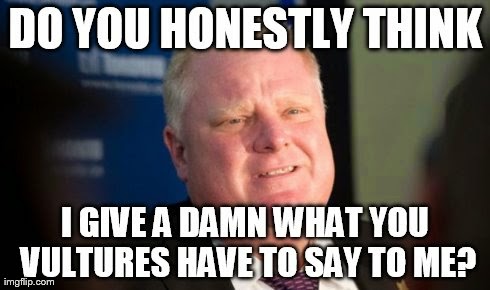 11:15 AM. Dougie turns up at the house. Hey Dougie, what's up? What? We got a Ford Fest again? Oh, good, we'll be in our element with our devoted fans. Buncha stupid ****ers. They buy anything we say. 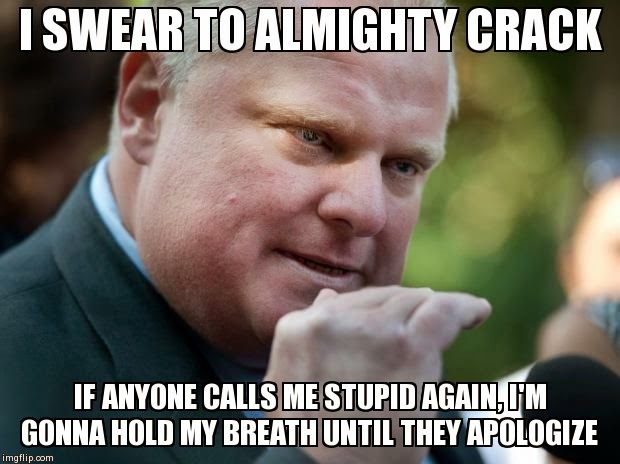 11:40 AM. Out the door and ready to get things started with Dougie. Those mother****ers with the press are waiting near the cars. God, I ****in' hate them. When I get re-elected, I'm gonna have them all banned from City Hall forever. Except that spineless piece of **** Warmington. Gotta have somebody on my side who bows to my every whim and just takes endless amounts of abuse without complainin'. He's a stupid ****. 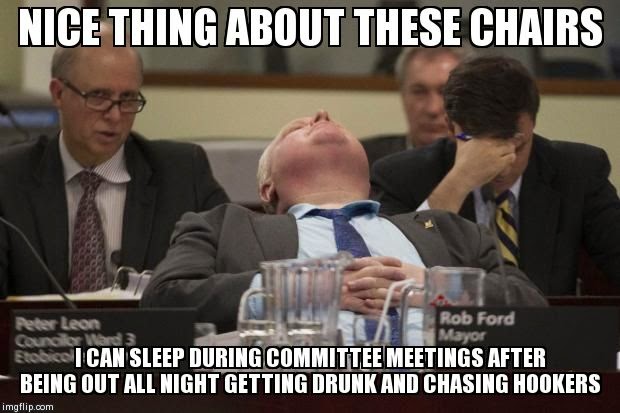 11:42 AM. Engaging this pack of maggots who keep askin' ****in' questions. No, Ford Fest is not a campaign event, and no, we don't have no booze showin' up there tonight. After all, I'm in recovery, you stupid ****s, and I have to pretend I'm on the wagon. Wait a minute, did I say that out loud? 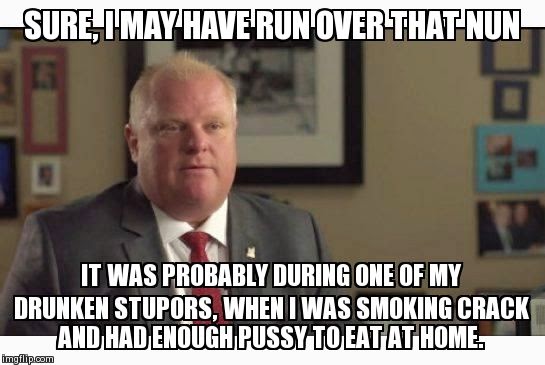 11:44 AM. Dougie's busy tellin' those stupid ****ers that I didn't mean what I said. I'm busy gettin' behind the wheel of my SUV. Boy, I still miss the Robmobile, but sooner or later we'll get it back. Again. 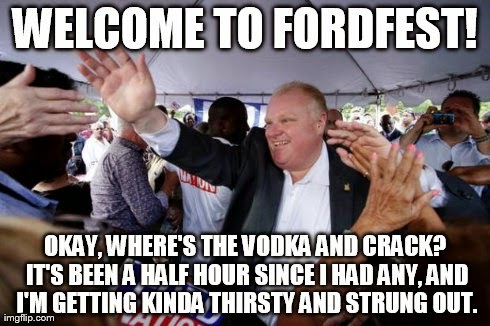 11:45 AM. Plow my way outta the driveway. Unfortunately I didn't run over any of those media maggots. Maybe next time. 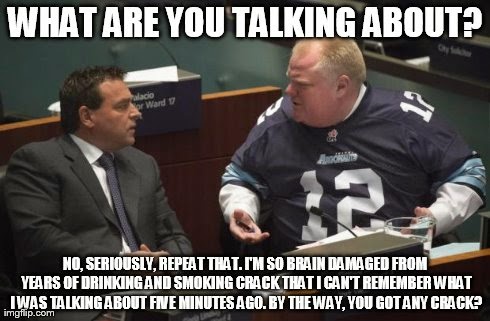 11:55 AM. Stop in to see my buddy Butch. He slips me some booze. Yeah, just what I need to get through the day. Gotta transfer it over to some water bottles sooner or later. Can't have anyone see me drinkin' ****in' vodka from the bottle. It's really hard not being able to get into a liquor store for my own stash. Thanks, man. Vote Ford More Years, Butch! 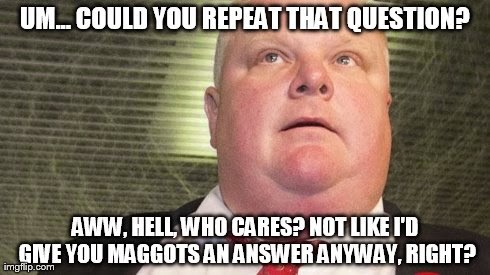 12:10 PM. Drivin' somewhere downtown. Helping myself to a couple swallows of vodka. Yeah, that hits the spot. 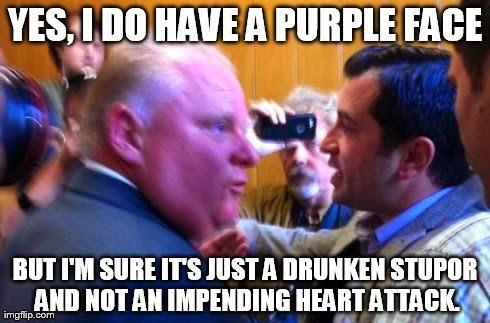 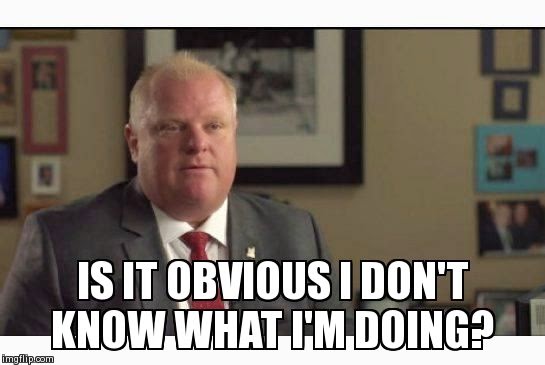 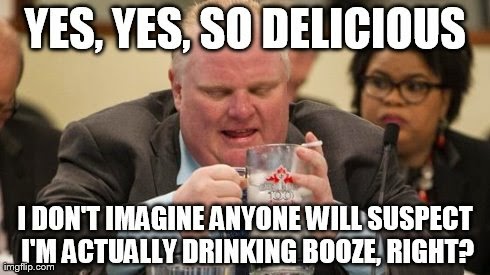 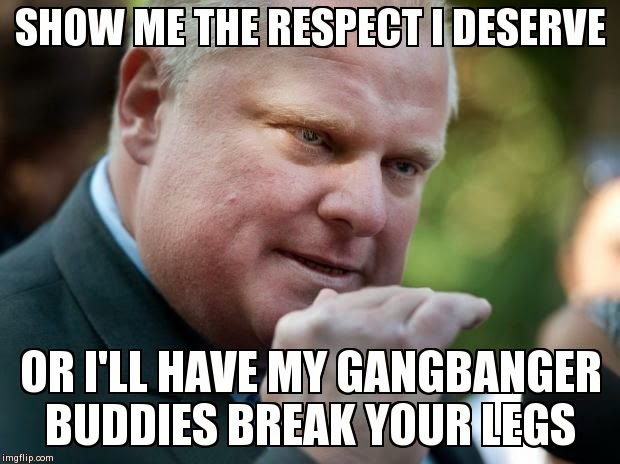 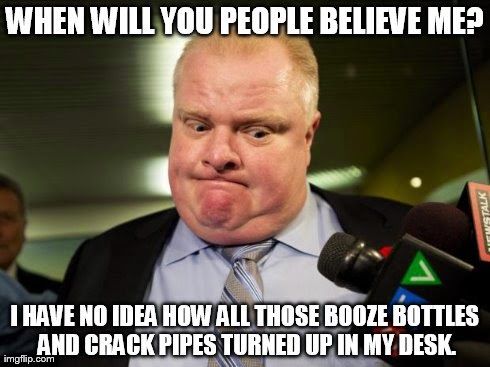 1:06 PM. Start off with a "I'm sorry about earlier on" statement. Tell them I was just kiddin' around and didn't mean it. All that matters now is it's in the past, we gotta move forward, gravy train gravy train, subways. One of the ****ers asks me why anyone should take me seriously if I joke around about alcoholism. Hey! I'm not talkin' to you, jackass! I'm talkin' to the hardworkin' members of Ford Nation who pay their taxes and are sick of the gravy train! So go **** yourself, you mother****er! 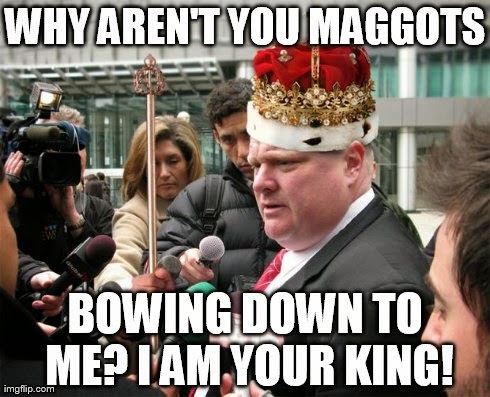 1:08 PM. Backtracking on my profanity laced tirade. I wonder if this is gonna show up on late night comedy again? 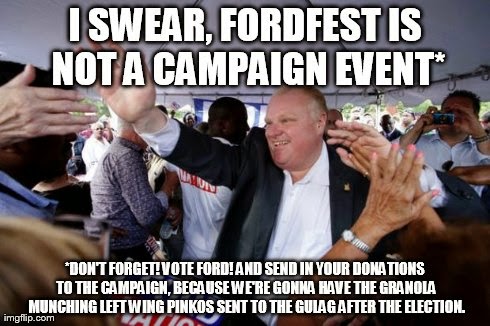 1:09 PM. Walk out quickly without takin' any more questions. Buncha nosy ****ers. I oughta take a flamethrower to every last one of those ****ers. Dare to question me, will they? 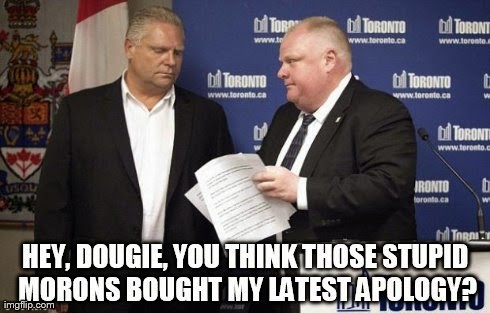 2:55 PM. Smoking crack. Getting high. I wonder if I left the do not disturb sign on my office door. 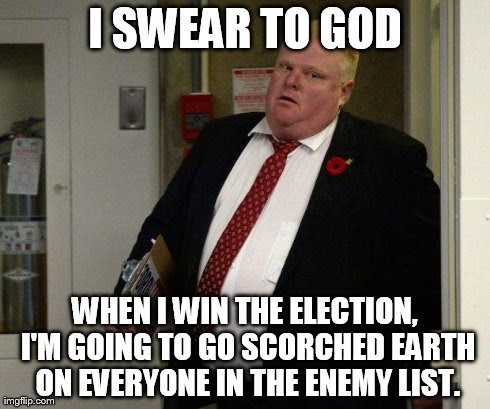 6:50 PM. Arriving at the park for Ford Fest! I can't tell how many people are here, but it looks like quite a crowd. They're my followers. My people. My disciples. And my loyal dullards who stay devoted to me no matter what. I could run over every last one of them drivin' drunk, and they'd still vote for me.

Heelllllllooooooo, Ford Nation! Are you ready to get hammered??? 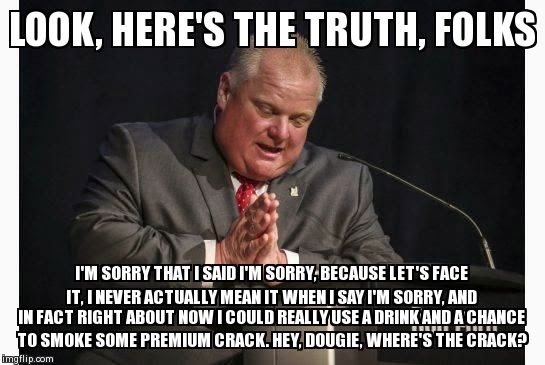 7:15 PM. Shakin' hands, pressin' flesh, gettin' hugs from my believers. Yeah, you're the real people of this city, not those granola munchin' left wing whackos from the Beach. Ford Nation, you're the real Canadians. And I'm proud to be your cult leader. 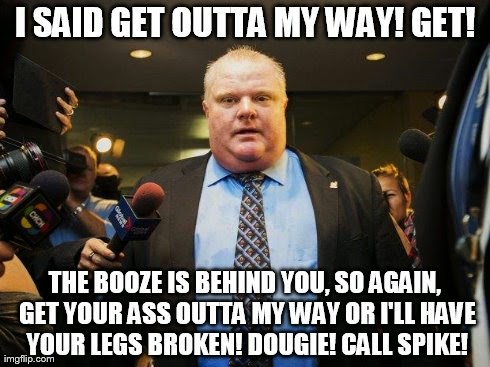 7:20 PM. Dougie and I are busy circulatin'. We're handin' out Ford Nation magnets and Vote Ford bumper stickers. No campaigning, my ass! I'm busy drinkin' "water" from my water bottle. Vodka really hits the spot right about now. Lots of people out havin' a burger and a beer. Good, someone smuggled in some booze despite this supposedly bein' a dry event. 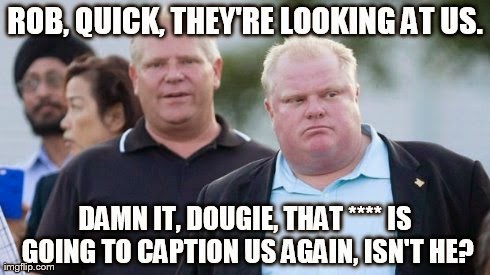 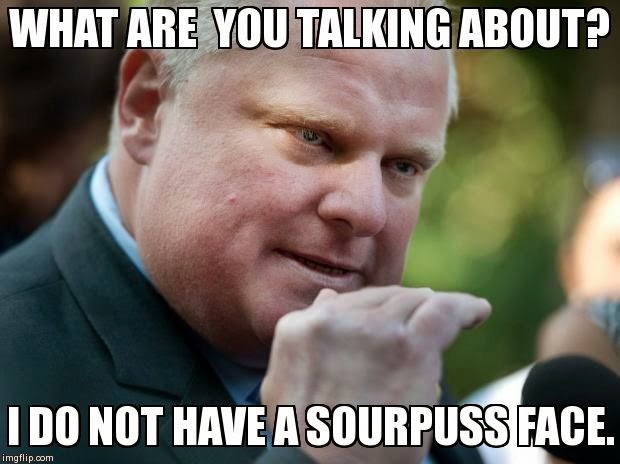 7:48 PM. Time to make a speech. Baskin' in the adulation of Ford Nation. Yes, cheer for me, for I am your god! 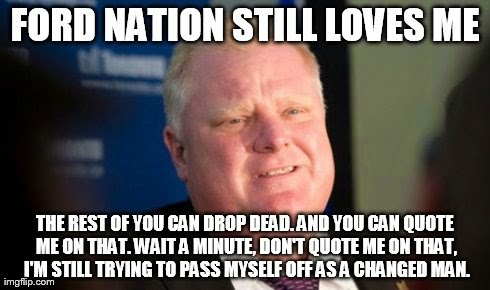 7:51 PM. Things quiet down a bit. I get myself started. I talk about the gravy train at City Hall. Buncha worthless ****in' city councillors try to undo anything I do just because they removed my powers as mayor? **** 'em! You heard me! **** 'em! The crowd goes wild. 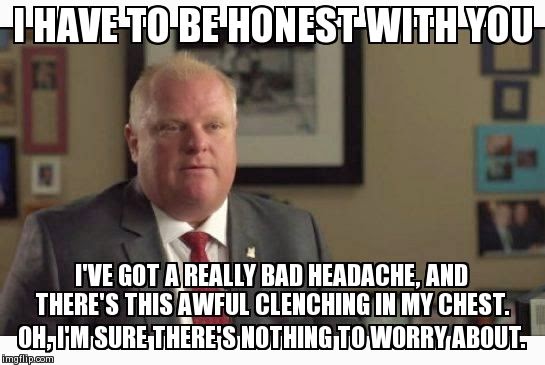 7:53 PM. I tell the crowd that things are gonna be real different after the election. We're gonna sweep those ****ers outta office and install people who'll answer only to me. That'll serve those ****ers right! And as for all those outta work councillors and those left wing loons who hate me, well, we're gonna take care of them too. 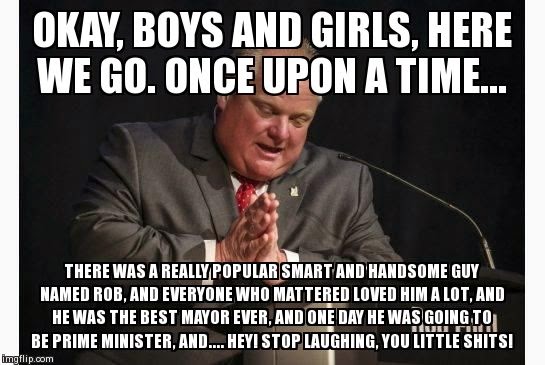 7:54 PM. I reveal Operation Set The ****ers Adrift On An Ice Floe to Ford Nation. Yeah! We don't need those left wing ****ers messin' up the party, am I right? So we're gonna set the ****ers out to sea on icebergs. Serves those ****ers right, every last one of them. Vote Rob Ford for mayor! Yeeeeeeaaaaahhhhh! 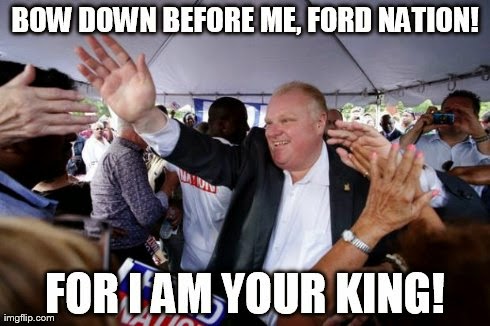 11:04 PM. Back at Mom's place with Dougie and Mom and Kathy. The brain trust of Ford Nation. The news is on. They're all out to get us, but we'll show them.

Turns out my speech was bein' filmed by news crews. Lotsa people already complainin' about my campaign speech and my plans to get rid of my enemies. The integrity commissioner's talkin' about further reviews of my conduct. Well, **** 'em! Ford Nation still loves me, and hates them, so **** 'em! 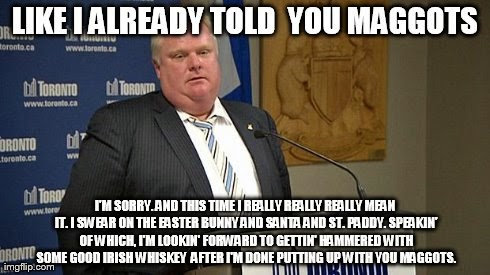 11:45 PM. Out back smokin' crack with Dougie. We had a good day, didn't we, Dougie? The only voters that really matter are behind us. And our enemies are all gonna find out what scorched earth means when we're done with 'em. Buncha ****in' ****ers.

I don't know about you, brother, but I could use a drink... 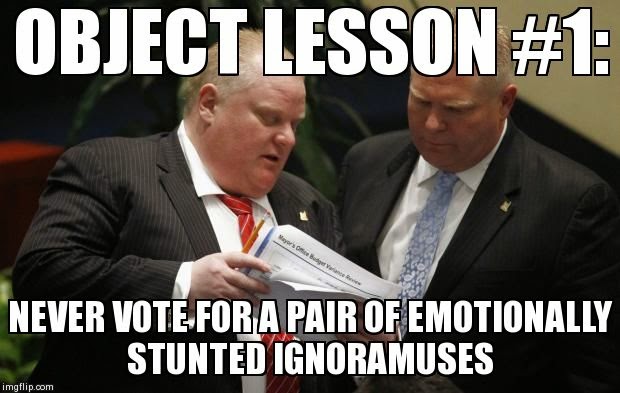