Does Anyone Know When This Volcano Finally Erupts?

Some business to see to before we get started today. Check out what Norma has to say about Miley Cyrus and other self indulgences. Now, today we've got ourselves a movie to be reviewed. Spoiler alert: the volcano wins. Take that, ancient Romans! 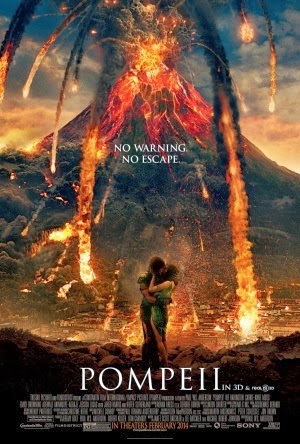 Pompeii is the latest film from director Paul W.S Anderson (those endless and pointless Resident Evil films), featuring a volcano daring to get in the way of a love story in the ancient Roman world. Oh, and there are some actors in the whole thing too. It just came out in theatres last weekend. Whether or not you go to see it depends on if you feel like sitting through undeveloped characters and a cast trying their best despite the hack who's directing them, all for a reasonably decent final act. 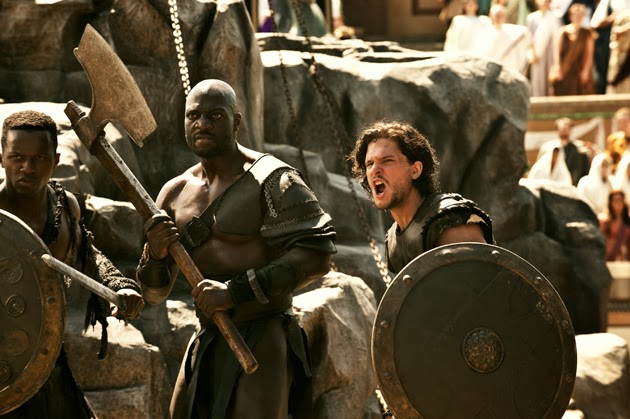 Anderson starts out the story years before the infamous disaster in which Vesuvius erupted, destroying the towns of Pompeii and Herculaneum in 79AD. In Britain, a young Celt boy named Milo is taken by slave traders after his family and tribe have been wiped out by a Roman force led by Corvus (Kiefer Sutherland). Years later, the boy is a gladiator (Kit Harrington), one of several such slaves on his way to Pompeii when by chance their party crosses paths with Cassia (Emily Browning) and her servant girl Ariadne (Jessica Lucas). Milo commits an act of quick mercy on a fallen horse, and Cassia is drawn to him. As fate would have it (or as the committee of writers deemed it essential as a plot device), she's returning to Pompeii herself. She's the daughter of the city's ruler, Severus (Jared Harris) and his wife Aurelia (Carrie-Anne Moss), back from time in Rome. 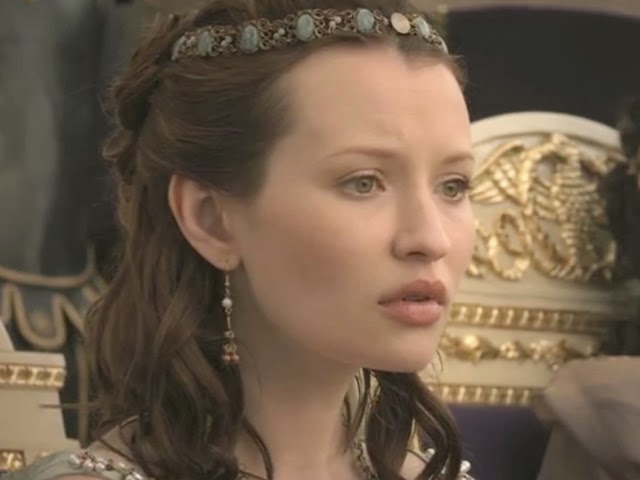 Milo seems fated to die in the gladiatorial ring. There's a rivalry with a fellow gladiator, Atticus (Adewale Akkinuoye-Agbaje) that gradually changes to mutual respect. He has a way with horses, and an awareness that not all is right in the earth around the great mountain. And he has a thing for Cassia (well, we can't blame him for that, can we?) and she feels much the same. Still, as a slave, there's that gulf of rank and place in society between them. And there's another problem. Corvus, now a Roman Senator, turns up, with his own plans for the city. He also intends to have Cassia for his bride, and won't put up with any upstart gladiator slaves with chiseled abs competing for the object of his affections. Needless to say, Corvus is a particularly nasty villain as villains go. Oh, and there's the whole problem with that mountain just waiting to go off. 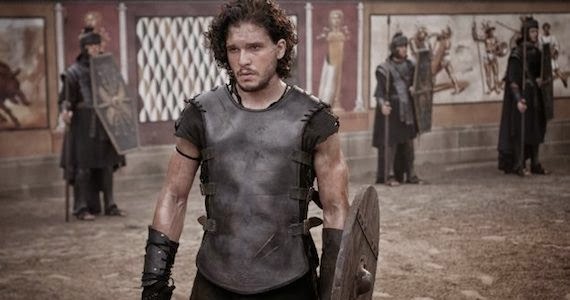 There's an assembly line of writers and producers involved in this. That's usually not a good sign. The story sets this fictional story against a real life disaster of antiquity. It comes to us from Janet Batchler, Lee Batchler, and Michael Robert Johnson. The Batchlers, a married couple, were among the screenwriters for Batman Forever (a warning sign if ever there was one). Johnson's previous credit was as a screenwriter for Guy Ritchie's first Sherlock Holmes. Their story is, well, derivative of earlier films- Spartacus, Gladiator, and Titanic are all clearly on display here in many ways. The characters feel undeveloped, and that's not really the fault of the cast... it feels more like the writers, particularly given such nefarious credentials. 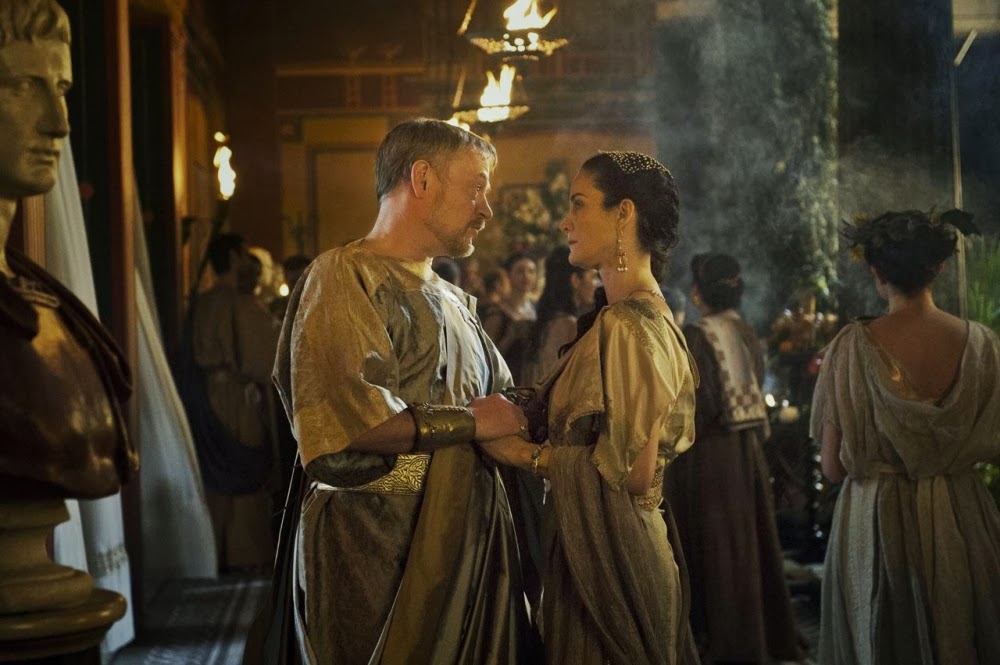 Anderson as a director is certainly not of much help either. Look at his resume. Aside from six Resident Evil films, this is the same person who brought such cinematic lowlights as Mortal Kombat, Alien versus Predator, and the most recent version of The Three Musketeers to the screen. An auteur, he is not. Instead he likes blowing things up on a big scale, and at least he gets to do that here. The special effects team working for him renders their work well, giving us the requisite earthquakes, tsunamis, ash clouds, and violent destruction of an ancient Roman city as we'd expect. If only they had a better director to work for. Aside from the derivative story, the director's the weakness of the film. He persists in the use of 3D for this film, so expect volcanic fire to be hurling out of the screen right at you. 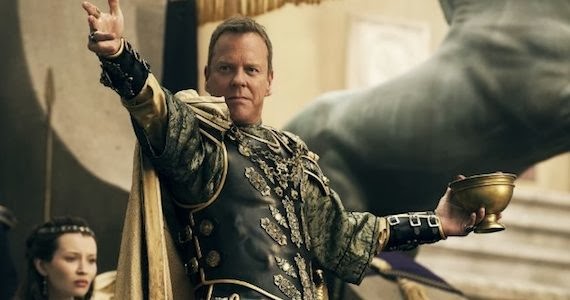 And frankly, the cast deserves better than to have undeveloped characters and a poor director at the helm. There are good actors here. Jessica Lucas is sympathetic as Ariadne, though it took me a bit of time to figure out where I'd seen her before: another disaster film, Cloverfield. Adewale Akkinuoye-Agbaje is a good character actor, from Lost and The Bourne Identity. He last appeared as a villain in Thor: The Dark World, and plays Atticus as a strong and honourable man. Jared Harris is likable enough as Severus (no, not Severus Snape). He's previously appeared as Moriarty in Sherlock Holmes: A Game Of Shadows and as General Grant in Lincoln, and he's a good character actor. It's been awhile since we've seen Carrie-Anne Moss (The Matrix trilogy), but she's quite welcome as Cassia's mother, though she might seem too young for the part. 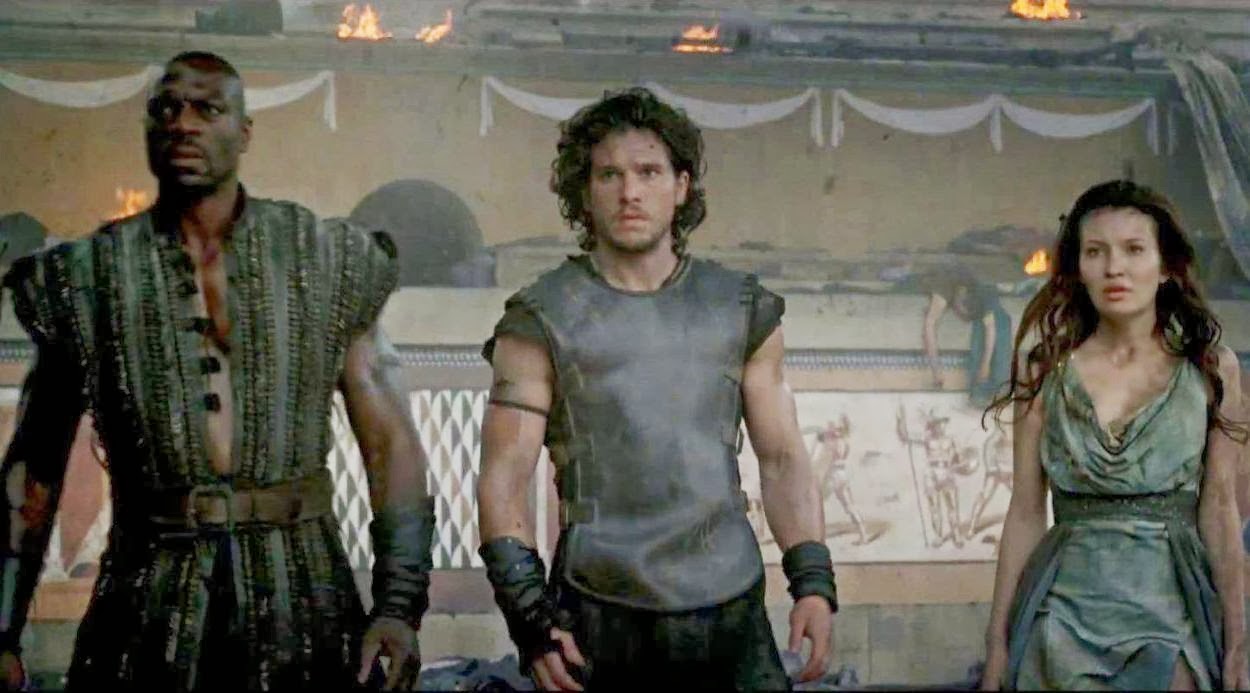 Kiefer Sutherland (24) gets to have fun as the villain Corvus, an utterly nasty and ill tempered Roman. You get the sense as an actor he's enjoying himself chewing the scenery and being as thoroughly despicable as he can playing the character. Emily Browning has an eclectic resume as an actress. Looking through her background, I was surprised that she had the wisdom to turn down playing Bella Swan in those wretched Twilight films; her work varies between indie roles and some horror work. She plays Cassia as well as the story will allow (it's not her fault the characters are undeveloped). She's essentially playing Kate Winslet's Rose in this particular disaster... which leads us to the Jack Dawson of this story. Kit Harrington comes to us from Game of Thrones, so he's in his element. He has to look the part of a gladiator, which he does, though if you're looking for a gladiator like Kirk Douglas or Russell Crowe, you'll have to look elsewhere, because Harrington's not in that league. At least unlike Leonardo DiCaprio, Harrington doesn't bug the hell out of me. Browning and Harrington don't have a lot of chemistry, but again... I'm blaming the writers for that instead of the actors.

The cast and the core story deserves better than the director and writers give them. I wonder what this film would have done in the hands of better creators. The film is uplifted somewhat by a good last act in which the volcano decides to finally get serious, kick butt, and take names. If you can hold out for that (and you don't have nightmares about dying horribly in a volcanic cataclysm), it's worth checking this one out. Just as long as you don't expect a directorial masterpiece, because Anderson's not capable of that. 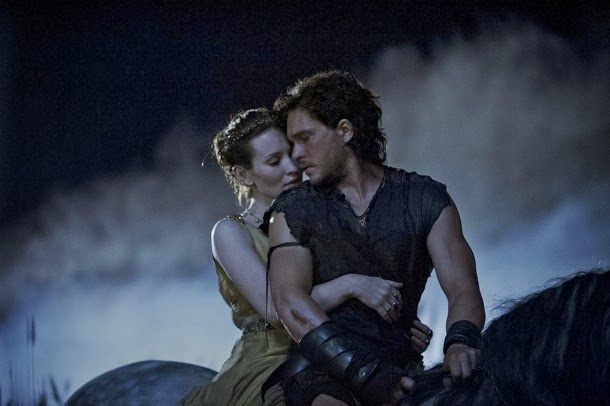 Posted by William Kendall at 7:50 AM