Calling Down The Thunder 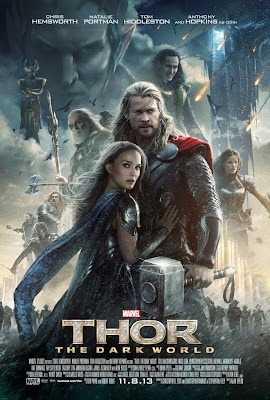 "Some believe that before the universe, there was nothing. They're wrong. There was darkness." ~ Odin 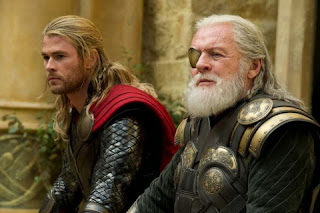 The God of Thunder rises again in Thor: The Dark World, the latest in the Marvel Studios adaptations of comic book characters, owing much to the work of writer-artist Walt Simonson, among others, carrying on the story of the warrior of Asgard, caught between loyalties at home and on Earth. Director Alan Taylor takes over from Kenneth Branagh this time out, and carries on with his themes while moving in some new directions. Chris Hemsworth is back in the lead as Thor for this film that starts in the past. Bor, father of Odin and grandfather of Thor, defeats the dark elves led by Malekith (Christopher Eccleston) in the opening sequence, something that might remind one of a Lord of the Rings sequence. Malekith and a number of his men, including Algrim (played by the outstanding character actor Adewale Akkinuoye-Agbaje) end up in suspended animation, while Bor safeguards the weapon they were after, a bit of cosmic mojo called the Aether.

In the present, Asgard is in transition. Since the events of the first film (and Avengers,) Thor and his allies have been engaged in conflicts to restore order in the Nine Realms. Loki (Tom Hiddleston) has been cooling his heels in an Asgardian prison since getting smashed by the Hulk in Avengers. Odin (Anthony Hopkins) and Frigga (Rene Russo) see their adoptive son in different ways, which would be an understatement. Back on Earth, astrophysicist Jane (Natalie Portman) having now gone two years without seeing the thunder god of her dreams, is wondering if it's time to move on with her life. She's still working with Darcy (Kat Dennings) and Eric Selvig (Stellan Skarsgard), who's seen better days since his possession by Loki in Avengers. Eric could use a vacation. And their work quickly casts one of their number into the heart of what is to come.

Of course the Dark Elves under Malekith make their return, otherwise you wouldn't have a movie. They're convinced the time has come for the Convergence, when their darkness will rise and blot out the light (this tends to happen when your hangers on are all malevolent nutters). And to make it happen, they just need to get their hands on that Aether... which happens to be in a rather unlikely location.

War rises, of course, and before it's all said and done, grave losses have been inflicted, lives turned upside down, old lovers have been reunited, the universe itself is at stake... and one god of mischief is put into a position where he has to be trusted again. Especially if it means he can get some very good lines in along the way. 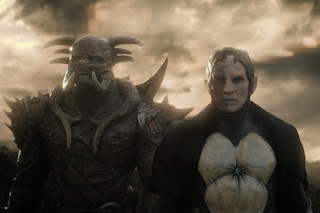 Director Taylor has a mixed background, in television and movies, but his more recent work was in Game Of Thrones. That experience serves him well here, since it feeds into a world of myth and legend. He wisely carries on with the concepts laid out by Branagh in the first film, giving the story a dose of humour but never crossing the line into parody. That reflects itself in little moments- Thor finding a place to hang his hammer, or the inevitable Stan Lee cameo (which works splendidly). The film expands on the ideas of Asgard and the Nine Worlds, and Taylor takes the story by Christopher Yost (a very good writer in the comics industry, by the way), Christopher Marcus, and Stephen McFeely, and runs with it. Asgard and the other mystical realms are explored at various moments in the film, and they look otherworldly, a nod to the special effects teams, who are obviously doing their jobs well. The visuals of these fantastic, mystical, or dark worlds is just breathtaking, as it must be in a film like this. Yes, Asgard might remind one of a pipe organ, but it also looks like a home to a pantheon of immortals. Costume design expands on the looks from the first film for the returning characters, while also creating an entirely appropriate look for the Dark Elves, which renders well compared to the comic versions. In particular, I liked the final look of Algrim, whose final hideous form in the movie is just what I would expect out of the man who became known as Kurse: it retains enough of the comics form and yet looks like its own creation. Brian Tyler steps in as composer this time out, and gives us a rousing music score that feels at home in Asgard (though I still prefer Patrick Doyle's score from the first film). 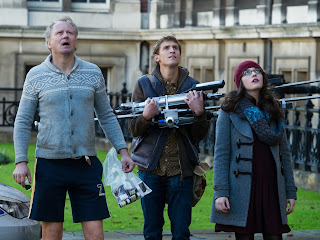 It's the cast, of course, that has to be right for this film, and they rise to the occasion. Eccleston, who's done a wide variety of work, largely in Britain, playing the Doctor in Doctor Who, or one of the leads in the much underrated Shallow Grave, is ideally cast as Malekith, a ruthless, malevolent, and vicious being, just as I would have imagined him from the comics. There is little mercy in this character, and there shouldn't be. Algrim is played by Adewale Akkinuoye-Agbaje (I can't believe I can spell that without checking it up first), a character actor who's something of a chameleon with a variety of film and television work (The Bourne Identity, Oz, Lost, The Mummy Returns). If they ever get around to making a film about the Black Panther, this is the guy they should be casting.

Stellan Skarsgard and Kat Dennings reprise their roles from the first film. Kat is as snarky as before, getting some of the good lines in as she chases after her friend Jane and finds herself caught in what might well be an end of the universe sort of scenario (oh, one of those again?) as the grave threat returns to Earth. Skarsgard, a terrific character actor whose work I always like, is back for a third time after the events of Avengers, and his character is a bit addled after the experiences of that film. Skarsgard gets to have some fun with it, from that angle. And there are some interesting cameos here, aside from Lee, one in a credits sequence that will tie into future films... and another featuring one of Thor's fellow Avengers, Captain America (Chris Evans), but not quite Captain America. 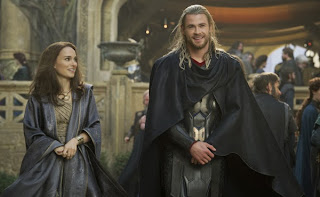 The rest of the supporting cast is in fine shape. Jaime Alexander is back as Sif, as fierce a warrior as she ever was. There's more of a romantic rivalry going on between her and Jane; as an immortal, she's probably more suited to Thor as it is, but she embodies the courage of Sif very well. Idris Elba is back as the Asgardian sentinel Heimdall, and he gets more to do this time out. That's a good thing, because Elba the actor brings great weight and dignity to the role. We also get a look at Tyr, the Asgardian war god, played by Clive Russell, a character absent from the first film. He's quite welcome here. 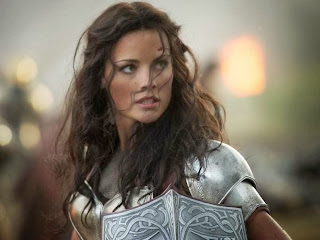 The Warriors Three return again.... well, two of the trio return, so to speak. Ray Stevenson returns as Volstagg, somewhat of a comedy relief character but also a ferocious and brave warrior. Tadanobo Asano returns as the steady Hogun, and as grim as ever. He's something more of the straight man for Volstagg and the third member of the trio. Zachary Levi steps in for Josh Dallas as Fandral, the dashing lothario. He fits the role quite well. All of them are willing to do the right thing- even if that means, oh... going against the word of their king.

Hopkins is once again ideally cast as Odin. The role is a complicated one; he can be cruel  or thoughtless at times, and at other times wise. Odin as depicted in myth and comics is always the one thinking ahead, planning and scheming. He's a wise king... but sometimes not a very pleasant Asgardian. Rene Russo reprises her role as Thor and Loki's mother Frigga, and though her connection to Loki is not a biological one, it's still strong; she worries about him, loves him, and in fact, that connection drives Loki forward through the film. She is, as before, a sympathetic character, and she plays the role that way. 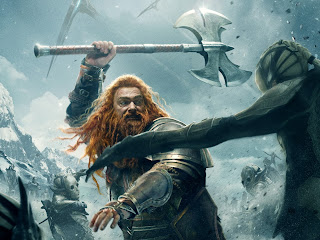 It is the three leads that are integral to the core of the story. Portman as Jane is given more to do than her comics counterpart might have had. She's smart and doesn't mind showing that, and she doesn't mind speaking her mind- such as taking offense to being insulted by Odin, striking Loki for that whole invasion of New York thing he did, or wondering what took Thor so long to get back to her. She finds herself in fantastic realms for the first time... and wonders if there is truly a place for her in Thor's life. There's a good chemistry between her and Hemsworth here; they know their characters, and they feel believable together.

Tom Hiddleston is back as Loki, and he's a character you can't help but admire and like, as devious as he can be. One's never quite sure where he stands, but that makes Loki work so well as a character. He always surprises you. Things are never quite as it seems with him. He plays the character as walking that fine edge between the darkness and doing the right thing, all while seeming to amuse himself. There is a good reason that drives him on in this film, a motive that gives him a ferocity. And it's his interaction with Hemsworth that really makes the film come over the top. Their bantering, the love-hate relationship between these two brothers, plays itself out out perfectly, and is really the highlight of the story.

Hemsworth is by now well familiar with Thor, having had taken the character through three films. He conveys the nobility of the man, the courage and the tenacity of the thunder god. He's wiser than he was when we first met Thor in the first film and saw a reckless, arrogant immortal. Hemsworth brings these qualities across, takes things seriously, but not too seriously. There are moments when he's having fun with the part- such as in dealing with subways or cars or chattering brothers who won't shut up. He carries himself well in the role. 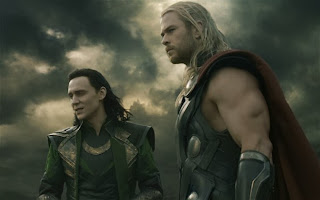 The sequel holds up well and expands on what made the first film work so well: this interaction between different worlds, the bond that can develop between people of different experiences, and the complicated family ties of these immortals who seem all too human. The film leaves things off in different places, but leaves me wanting more, as it should. 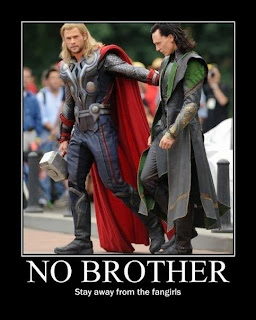 Posted by William Kendall at 4:41 PM