Two items of note to take care of before we do anything else today. First, check out our joint blog for a look at football. Then go on over to Kittie Howard's page for her look at the air operations on D-Day and pics from her recent trip to Normandy.

Now then, today I thought I might go back and reprint a review. It's been awhile since I wrote it, and this is for Shelly Arkon's book Secondhand Shoes. Shelly is a friend of mine, a great supporter of fellow indie writers, and in short good people. She's been dealing with a lot of chaos in her life as of late, so it's time to put some attention her way. This was a fun book to read, a real page turner that kept me entertained. Check it out, and I'll leave links at the bottom. 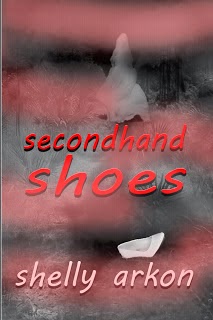 Secondhand Shoes opens in an uneasy place, with the main character, Lila, an eighteen year old woman on her wedding day. Her bridal nerves are more than what might be expected; she's marrying a man she barely knows and doesn't particularly like, thanks to the pressure of her overbearing mother Babs. Lila has little say in the direction of her life, no respect at all from a mother who thinks that she's crazy, a father living far away in exile, and a step-father who bows to his wife's every demand and seems to have lost his spine. The only living person who seems to be on her side is her best friend Cynthia, and we can see this in her advice to run while she can.

Then there are the ghosts. Just like a long out of work former child actor who shall remain unnamed, Lila sees dead people. One of the ghosts in her life happens to be her paternal grandmother, who has little patience for her former daughter-in-law's overbearing ways, and is at Lila's side through much of the story. Gram is a force to be reckoned with, a mixture of common sense and great wariness about the threats that exist in the world, particularly where her granddaughter is concerned.

Lila's ability isn't appreciated by most people around her, let alone her mother, who won't abide such nonsense. Instead Babs, who we learn has coerced her daughter into breaking off with a young man she did like, simply because of her own prejudice, has orchestrated a relationship with Max Butz (yes, that's his name), a dirtbag of the first order who thinks that turning up in a orange polyester suit for his own wedding is perfectly acceptable. Max runs with a similar pack of criminal degenerates, has a father with anger management issues, and a religious zealot for a mother (with a few hidden secrets of her own). It doesn't take long before the reader confirms that first impression: Max is a vicious bully with no respect at all for Lila, and nothing at all resembling scruples.

The story hinges on a decision Lila makes to take her life into her own hands, and it leads her into danger, both physical and supernatural. She has to confront her own fears and anxieties (fear of germs, insects, and other creepy crawlies plays big for this protagonist). She gets help along the way, from the living, the dead, and those who are, well, in between.

Shelly Arkon has done well with her first novel. She has a strong style, giving characters a voice that are distinctly their own, even minor characters who might only appear for a scene or two. And she pays attention to detail: scenes in a Southern swamp make the reader feel like they're right there; the same applies to sequences in a truck, a roadside dive, or even in an afterlife of sorts. The style draws the reader right in, and gives the narrative a touch of authenticity. The same applies for when the story is set. This is firmly set in the Eighties, and cultural references of the time abound, small touches that firmly ground the story.

As mentioned, there's a liberal dose of humour spread throughout the book. Some of it comes from the living characters, such as Lila herself (especially her paranoid germ phobias), Cynthia, or B.J., a trucker who turns up along the way. Much of it comes from the ghosts, particularly Gram, who is a wise sage capable of interacting with the world in a number of different ways; she can wreck havoc with electricity or make use of nature, and does so with regularity.

Characterization itself is the bedrock of the book, and this is the strength of the novel. I felt a particular dislike- and this shows the strength of the writing- for Babs, who comes across as a bully (including at times even physically) and a terrible mother. She's overbearing, difficult, temperamental, and bigoted. She might be Lila's mother, but at the same time, there's a toxic quality to her that was close to home for me. I've known a couple of Babs, and these are the unpleasant sort of people you wish you'd never known

Max and his cronies and relatives are memorable, if unlikeable. In different ways, their personalities come across as real, and sleazy. At least in some ways, I expect real people have inspired them.

Cynthia is a strongly written character. She's absolutely supportive of her friend, fierce and courageous when she needs to be, and willing to prod Lila along when she needs it.

Gram is the scene stealer of the book, a wise woman with heart. For a ghost, she's more than lively, won't take nonsense from people she doesn't care for, and is protective of her granddaughter. She's aware of the world in a way that those who are living can't be aware of, including a lingering threat that might well be left for another novel.

The book is really about Lila's journey. It takes her from being meek and submissive to making choices for herself, to finding her own strength and resolve. It's understandable, given the way her mother is, that the character starts out as not wanting to rock the boat and refuse her mother's wishes. Over time she's gotten used to surviving what basically amounts to emotional abuse by just going along with everything her mother says. During the events of the book, Lila comes to terms with what it means to be an adult, to have to be responsible for her own decisions. It's character growth, and it helps that we're sympathetic towards her from the start.

Secondhand Shoes tells a story that is at times tense, at other times wry and mischevious. It wraps up the natural arc of the characters while leaving room for more, and provides its own good spin on the world of the paranormal. The pacing of the story keeps things moving along, and the characterization and attention to detail combine to make the book succeed.

Secondhand Shoes can be found through Shelly's Amazon page as an ebook. You can also catch up with her at her two blogs, Two Fur Peeps And A Writer and Secondhand Shoes. And she can be easily found on Facebook and Twitter. She's busy working when she can on a new book, Killer Stilettos.

Posted by William Kendall at 6:55 PM