Never Go Against A Sicilian When Death Is On The Line

Before getting started, some business to see to. Take a look over at our joint blog for a Without A Word blog playing with the theme of a wedding disaster. Go on over to Norma's blog, where she has some news. And have a peek over at Gina Adams' blog, where I wrote a guest post about the ghost in my house.... that happens to have good taste in music.

Now then, I've been thinking of doing this for awhile, so I decided to start with this. Every once in awhile, I'll be writing reviews of classic movies. That might mean golden era movies... or more recent movies. In this case, I'm starting with one of my all time personal favourites. Odds are many of my readers will count this one as a personal favourite too. 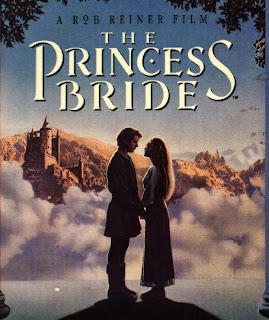 “He didn’t fall??? Inconceivable!” ~ Vizzini
“You keep using that word. I do not think it means what you think it means.” ~ Inigo Montoya

“You never said anything about killing anyone.” ~ Fezzik
“I’ve hired you to help me start a war. It’s a prestigious line of work, with a long and glorious tradition.” ~ Vizzini

“We face each other as God intended. Sportsmanlike. No tricks, no weapons, skill against skill alone.” ~ Fezzik
“You mean you’ll put down your rock and I’ll put down my sword and we’ll try and kill each other like civilized people?” ~ The Man In Black

“You’ve done nothing but study sword play?” ~ The Man In Black
“More pursue than study lately. You see, I cannot find him. It’s been more than twenty years now and I’m starting to lose confidence. I just work for Vizzini to pay the bills. There’s not a lot of money in revenge.” ~ Inigo

“I will go up to the six fingered man and say, Hello. My name is Inigo Montoya. You killed my father. Prepare to die.” ~ Inigo 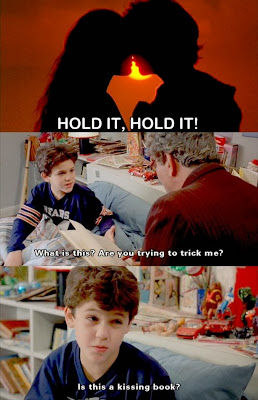 A sick grandson (an impossibly young Fred Savage) gets a visit from his grandfather (Peter Falk) at home, the framing sequence for the 1987 classic The Princess Bride. His grandfather, as curmudgeonly as you’d expect from the late great Falk, has a book to read to him, one that includes fighting, fencing, giants, pirates, escapes, true love… and some kissing. And so the boy and the audience are swept up in the fairy tale story by director Rob Reiner and writer William Goldman, who adapted his novel.

We meet the fair maiden Buttercup (Robin Wright) on her farm in the land of Florin, where her greatest pleasure is tormenting the farmboy Westley (Cary Elwes). At least until she realizes she’s fallen in love with him. He goes off to seek his fortune, and word reaches her that he was on a ship attacked by the Dread Pirate Roberts and killed. Buttercup vows to never love again. 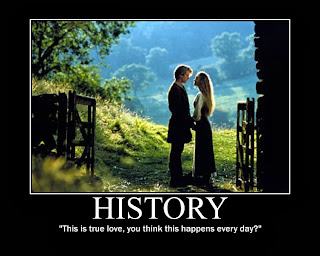 Five years later, Buttercup is engaged to Prince Humperdinck (Chris Sarandon), who on the surface looks the part of the charming prince but is really a jerk. She falls into the hands of three kidnappers, the Sicilian Vizzini (Wallace Shawn), the swordsman Inigo Montoya (Mandy Patinkin) and the giant Fezzik (Andre The Giant). Vizzini is the nefarious one of the trio, out to start a war. Inigo works to pay the bills, more interested in getting revenge for the death of his father. And as much of a wall of muscle as Fezzik is, we quickly see he doesn’t like the idea of killing, and is in fact a warm and reasonable giant. They set off by boat, but someone is following them, a mysterious man in black who must face the sword, strength, and wits of the trio. It’s the start of a journey that will take the characters up the Cliffs of Insanity, through fire swamps, past rodents of unusual size, and into the Pit of Despair, with a nice stop off for an MLT: mutton, lettuce and tomato.

The Princess Bride has built up a tremendous following in the years since it was first released. It gives us a fairy tale with some modern sensibilities in the writing, and Goldman’s script preserves the wit, intelligence, and wonderful humour of the book. Wisely in using the narrative framing of the grandfather and grandson to periodically interrupt the story, it allows the audience to tweak the conventions of the fairy tale. The film respects those conventions at the same time as it turns them on their side, so to speak, through the rest of the story. We have the story of true love conquering all (and that true love comes across as genuine) set against dark threats, a cruel prince, and a treacherous count. We have story elements like magic, revelations, beasts, trickery, swordplay, happy ever after, and more, all essential elements of the fairy tale genre. And Goldman’s script is written in a way that can appeal to all ages. Kids will come away watching it in one way and love it. Adults will get so much pleasure out of it. It’s smart, and it doesn’t mind being smart; this is a welcome thing in a current day when so many films seem to cater to stupidity. This film might well be the most quotable film of all time; it wouldn’t surprise me if there are plenty of people who can quote every line of the movie. 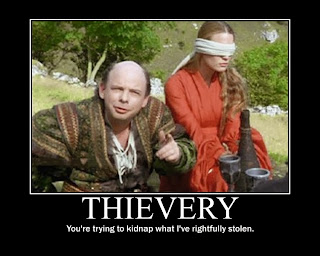 Rob Reiner the director is known for comedies that rely on intelligence and strong characterization. It’s hard to decide if this is the better film, or if When Harry Met Sally tops it, in his works. Maybe they’re both tied firmly in first place. He made this film, assembling a production crew that made the setting feel very grounded in another time. The castle, the towns, the countryside all feel like they’re drawn out of the past, yet very liveable places. The attention to detail is all there, from sets to costuming to makeup. Particularly with the latter to making two very funny comedians look completely unrecognizable. The music comes from rocker Mark Knopfler, who occasionally composes movie scores, and has a style that sounds both very much like his style and yet perfectly in keeping with the theme. And the fighting and fencing choreography in portions of the film works very well, so they had expertise on hand in this department. Inigo features in both of the major fencing sequences, and in the first, the scene is one of two master swordsmen, bantering about schools of fencing while they duel, showing great respect for each other. Every moment of those duels feels thrilling, and is filled with meaning. 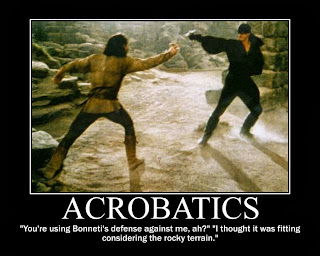 The casting is key to making this film work so beautifully. Chris Sarandon had the looks of what you’d expect a prince to look like- dashing and handsome, and he inhabits the part very well indeed, conveying the treachery, deviousness, and pettiness of Prince Humperdinck’s character. Christopher Guest has a marvellous turn as his right hand man, Count Rugen, seemingly polite and yet all too eager to try out his latest torture device. There’s an arrogance and treacherousness to him, and a cowardice as well. Both are wonderful parts for the actors to play, and the audience can’t help but love to hate them. 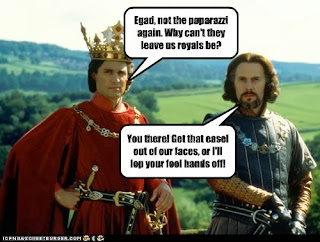 Supporting characters abound here. Peter Falk is wonderful as the grandfather, sparring with his grandson as he tells the story, admonishing him that someday he might not mind the kissing scenes so much. Peter Cook does a brief cameo as the Impressive Clergyman, whose speech impediments would drive one to distraction. The late Mel Smith, a British comedian who I was also familiar with for a turn in the 90s version of Twelfth Night, has a good cameo as Rugen’s henchman, The Albino. And Billy Crystal and Carol Kane are hilarious as the wizard and witch Miracle Max and Valerie, two long married bickering souls who are unrecognizable under the makeup. They rant and roar, yell incessantly, are completely delightful, and Crystal gets some of the best lines of the film in his interactions with Inigo and Fezzik (“It just so happens that your friend here is only mostly dead.”). 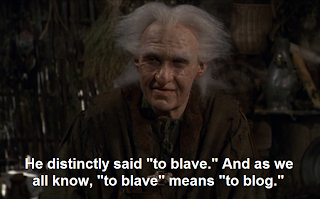 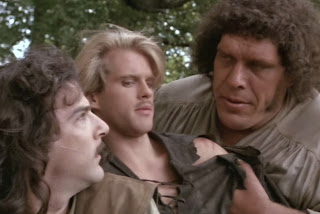 The trio of ne’er do wells start out as kidnappers, and the casting is ideal in each case. Wallace Shawn as Vizzini is wonderfully cast as the grouchy boss of the trio, utterly convinced of his own genius and all too willing to overuse the word inconceivable. He’s prone to blowing his stack and making threats, even to a giant much bigger than him. The late Andre The Giant’s performance as Fezzik is a revelation: here we have a character who’s basically a walking mountain, capable of great strength, used to fighting gangs, and yet the character at heart is gentle and considerate, prone to rhyme (some of the time). There is a tremendous warmth in Andre’s performance. Mandy Patinkin as Inigo is one of the treats of the film. We get to like him very quickly, even before we learn about the death of his father. There’s a warmth and sympathy to him, a mixture of fierce determination and a sense of humour in the performance. We understand what drives him, and we root for him to have his revenge. 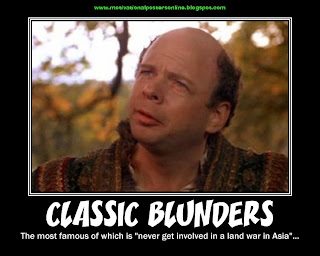 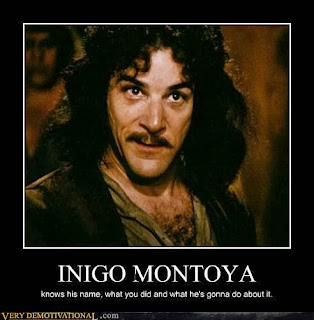 It is the two leads who are the heart of the film. Robin Wright is our Princess Buttercup (only in a film like this could we have a heroine named Buttercup). She is the damsel in distress of the story, but she brings defiance to the role. She plays the character to have her own mind, and perhaps wounds Humperdinck the hardest with some pivotal verbal barbs at the right moment. We feel sympathy for her from the start when she believes she has lost the love of her life, and we can’t help but root for her as the story goes on. Cary Elwes plays Westley as he shifts through time, becoming the dashing lead. We have to believe him to be a resourceful, courageous, and clever man, utterly determined, and Elwes delivers. He brings a sarcastic charm to the part, an ideal choice for the role. 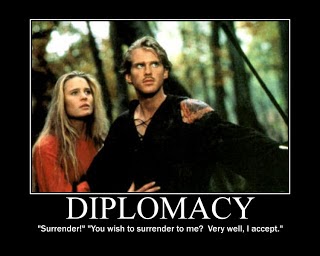 The Princess Bride remains a classic today. There is no slow moment to it, no false step. The characters are wonderfully rendered, there’s such a rich sense of humor to it, and the story flows quickly, and is filled with smart dialogue. We can’t help but get drawn into this fairy tale, to love the characters, and every time we go back to it, the story remains fresh and inviting. I never get tired of it. 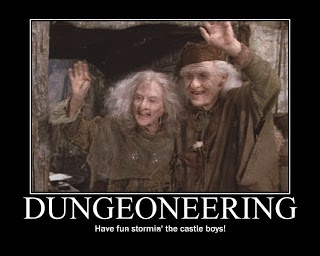 Posted by William Kendall at 10:22 AM