Mutant Mice And Petty Larceny: The Middle Age of Aquarius 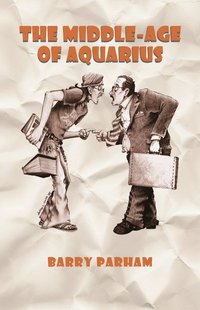 “And just when everybody stops being worried about mental health, June sneaks up on us with National Accordion Awareness Month. Man, that’s cold. That’s just wrong.” ~ Barry Parham
Writing or reading humour is an entirely different beast from a novel. The pacing’s different, the tone’s lighter, and it usually makes you laugh more. Unless the writer is doing something entirely wrong. In which case the book has backfired. I’ve read many humour compilations. Some of them are from columnists with weekly or daily columns in newspapers, magazines, or online sites. Others are from stand-up comedians. The good ones have made me fall about laughing. The bad ones commit the cardinal humour sin of not being funny. Ray Romano, I’m looking at you. And your ghost writer.
Fortunately Barry Parham is firmly part of the former. He has been writing humour columns online for a long while, compiling his work into books. I recently dove into one of his books, The Middle Age of Aquarius. And I quickly found myself smirking and laughing at the way he tells a story, and his deft skill with a punchline.
The book is organized roughly by theme, with recurring elements playing out as we go along. Making fun of getting older comes up again and again. The buffoonery of politics is tapped into (of course, that’s a subject that’s just begging to be lampooned). Life in the South is another topic for fodder. Skewering traditions and pop culture. And of course a twisted, clever variation on Dear Abby.
I started laughing early, and kept laughing throughout. Parham writes of pitting show horse stallions against monster trucks, of the real meaning of The Nutcracker experience, or why people are in such a rush to get through South Carolina. Then he turns around and explains what’s wrong with the Zodiac, wonders how old is too old for Hallowe’en trick or treating, and recounts how Southerners overreact to a snow storm. He’ll don his Dear Abby persona to dole out advice about everything from caffeine insanity to idiot fellow employees to political shenanigans. From there the horrors of math are laid out, death in the age of Facebook is examined, and the perils of the average daily commute are spelled out. Then we get into the art of stupidity and the ordeal that is shopping in gigantic monolithic box stores. And there’s much, much more.
Parham has a smart, cynical style of writing that I found very enjoyable. He knows how to build on a story, with just the right pacing for the joke. He’ll start you off with a laugh in each topic, and build from there. By the time he reaches the punchline, you’re straight out laughing at where he’s taken the story... not to mention the sacred cows he’s sacrificed along the way. It’s a deviously hilarious book, and it’ll get you laughing too. Unless your idea of the highest form of comedy happens to be Ray Romano. In which case, God help you.
In closing... can we talk about National Accordion Destruction Awareness Month?


The Middle Age of Aquarius, along with Barry's other twisted books, can be found at his Amazon.com page. He can also be tracked down at his blog, Mooncalf Communion. He refers all legal challenges to his lawyers and swears he had nothing to do with knocking over the Bellagio.
Posted by William Kendall at 6:28 PM