D Is For Diplomacy

It's been awhile since I've done one of these, so I thought I'd play around with a one-off of sorts today, by tossing a Muppet into the seething cauldron that is Middle East peace negotiations. Well, not literally into the cauldron... well, you know what I mean. Anyway, without further ado.... 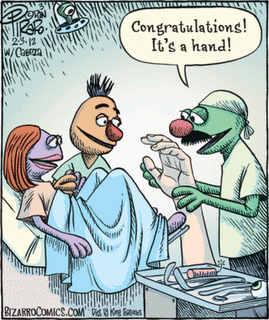 Peace Talks Fail, Iranians Blame UN Muppet Envoy
New York (AP) Middle East peace talks have stalled at the United Nations after the Iranian delegation walked out of a session. Ambassador Farid Ebadi and his staff stormed out in fury during a closed session with the delegations of other regional parties. The United Nations continues to remain concerned with the nation’s nuclear program and intentions towards other countries in the region. They have appointed a special envoy as a chief negotiator for the talks. The envoy is a rather unusual choice, given that he is a Muppet. 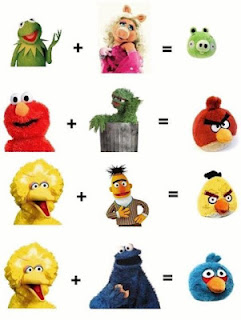 “We will not be subject to such utter nonsense!” Ebadi declared before a group of reporters. The Ambassador looked outraged, clearly frustrated by the events of the day. “We have our own destiny to write, not be dictated to by outsiders and fools! We are meant to be feared and respected, not ridiculed!”

The tirade went on for a half hour, with the Ambassador switching back and forth between English and Farsi, ranting about conspiracies, Western interests, and vague threats. Finally, one of the reporters asked, “Why are you walking out of the discussions?”

“Because the envoy is a puppet!” Ebadi answered, red in the face with anger. “A felt children’s puppet with weird hair and weird eyes! And all he manages to say is meep, meep, meep. It doesn’t even make sense! Such gestures are proof to us why we must hold the UN in such contempt! Why we must forge our own path! I promise, this will not go unanswered. For this display of contempt upon us, we will rain down fire on all of our enemies! As soon as we can figure out how to stop our glorious scientists from getting killed or disappearing and get the bombs finish… um, did I say too much?”


The ambassador stormed off, followed by his entourage. Out of the room came the special envoy, looking confused, wired, and slightly on edge. Beaker the Muppet has been working carefully to help the peace process along, trying to bring together competing visions for the region. It has been largely a thankless task. He was asked for his comment on the situation.
“Meep! Meep meep meep! Meep! Meep!” 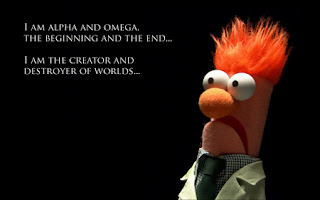 Posted by William Kendall at 2:20 PM