Secrets, Friends, And An Inept Killer: Box of Rocks

Today I'm doing a book review for Karla Telega's novel Box of Rocks. You can find her blog at Telega Tales, where she regularly dispenses observations about life in her very funny way, and the book can be found in paperback and ebook form right here at Amazon. 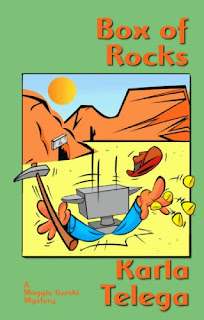 "I imagine that you and Cher can come up with something that will test the bounds of the legal system."

A remark early on from a therapist, and it entirely fits the events in Box of Rocks. The novel is the first by writer Karla Telega, and combines mystery, comedy, secrets, and the bond of friendship into a good narrative. At its heart are Maggie Gorski and Cher Anderson, two South Carolina friends in their fifties. Maggie is happily married to Ted, while Cher is a single woman after her first and only marriage ended years before. Maggie copes with anxieties and phobias, particularly about designer dogs (that rates as an odd phobia, but she has good reason), while Cher seemingly lives a carefree life. Their idea of recreation is finding odd misadventures to occupy their time, from following ghost tours to target shooting. The latest notion to cross their mind is to go panning for gold in the wilderness.

There are, of course, other players in the book. Paul Lakeland, a graduate student in archaeology, makes a discovery in the woods related to his doctoral thesis, within an abandoned mine, finding evidence of an old legend linked to the Creek Indians. If the evidence leads in the direction he expects, it could be the discovery of a lifetime. He shares his hopes with his graduate advisor, Samuel Peters, who, as fate would have it, conspires to take credit for the discovery himself. Apparently the good professor forgot to take classes on ethics when he was a student.

The last key player of the book is a man nicknamed Bear. He and a confederate have been working deeper in that mine, and we quickly discover that they're working on extracting a vein of gold they've discovered. Bear has been watching Paul, who's oblivious to being watched, let alone to the other work going on in the mine. He views Paul as a potential threat to the payday he has coming, and decides to act to remove the threat.

Paths cross between the characters out in the rural backwoods and in the city. Bear makes attempt after attempt to kill Paul, each time failing. It's a combination of bad luck for Bear, and very good luck for the otherwise clumsy Paul. Maggie and Cher meet Paul and Sam while starting out on their prospecting misadventure. After Sam gets killed by Bear- who was aiming to kill Paul- Maggie and Cher discover the body, and find themselves looking into the crime.

The book hinges on the quality of its characters, and particularly on the friendship and chemistry between Maggie and Cher, who are its greatest strength. I liked the way these two have history, a mutual understanding and support of each other. Cher, who could very easily be just the comic relief of the book (her general and funny stereotyping of rural folk is one such example), shows unexpected depth when discovering a connection to another character. As Maggie finds out something about her friend that even she didn't know, it would be easy, given the circumstances, for Cher to feel resentment towards the character in question, but instead feels a great empathy. I found this a good touch. It gives the character depth.

Maggie herself is a good character too. Her phobias come across as real- and funny- and her way of dealing with it even more so. She has a good, easygoing chemistry and relationship with her husband Ted. Their banter and scenes together have a natural feeling. She's got a ferocious loyalty to the people she loves, and her personality has layers and quirks, which add to how real she feels to the reader. She's someone we can particularly relate to.

Good characterization extends to the rest of the book. Paul has the luck of the Irish, it seems, surviving multiple attempts on his life with unexpected grace. He's very likeable... if a bit incapable of seeing potential threats around him. I find that a good touch, actually. Academics can be so narrowly focused on their own interests that they're oblivious to anything else. And Sam's unethical turn to try to claim credit for Paul's discovery rings true too. There's more then a share of devious academics out there.

Bear, as he's known early on, is an unlikely funny criminal. Writing from his point of view is a challenge- for reasons that come clear later on in the book- but his decisions are understandable; he's driven by his own greed. And the failures of his attempts to kill Paul made me laugh, almost cartoonish in the way they come apart. Each time he's a target, Paul comes across as the Road Runner, surviving certain death by sheer luck. That, of course, makes Bear the Coyote. His intricate plans come apart on him time and time again, and he's left wondering just how did that happen?

There's a good attention to detail throughout the book. Karla lives in the Carolinas, and so is writing about her proverbial back yard. From setting details such as plant life or architecture to the cultural details that are inherently part of the region, these are things that give the book a sense of authenticity that an outsider wouldn't otherwise have picked up on.

Murder and danger drive the plot along, but she uses a healthy dose of humor along the way. It gives the book a sense of levity and lightness, and makes us like the characters all the more. I'm not usually a mystery reader, but I quite enjoyed reading Box of Rocks, and it's the humor, pacing, and especially the two leading ladies that make it work so well.
Posted by William Kendall at 2:39 PM