The Despair Of Leafs Nation 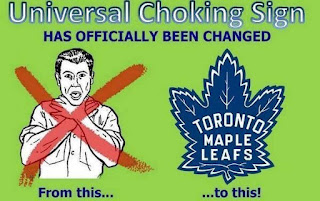 Maple Leafs Blow It Again, Fans Caught In Five Stages Of Grief
Toronto (CP). It is a truth universally acknowledged that a Toronto Maple Leafs fan must be in want of hope of a Stanley Cup parade. Despite their record. Once again Leafs Nation is heartbroken, as their team went down to defeat in Game 7 of the first round of the playoffs on Saturday night, and in the days since, their fans, who have been deprived of a Stanley Cup parade since the team last won the Cup in 1967, are struggling to cope with the unthinkable to them, and the obvious to everyone else: their team specializes in screwing up when it counts. 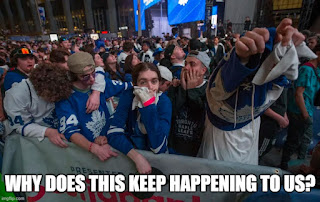 The Tampa Bay Lightning vanquished the Leafs in the seventh game of a best of seven series that many objective observers saw coming. "It's simple," Charlie McGuire, a writer with the Hockey News observed. "Once they're under pressure, and it's do-or-die time, the Leafs will start saying about how they're going to get their game going and put it all out there and rally back... but that's just talk. Because you know that they know that they've already lost. And that Game Seven ends up just becoming a knife that grinds into the team, and then grinds into the fans. It hurts. Unless you're not a Leafs fan, in which case, it's hilarious." 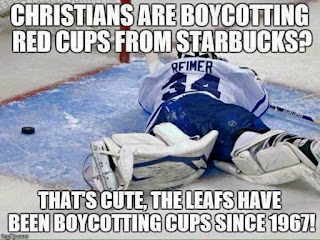 In the days since the fateful night in which the Leafs maintained their annual tradition of blowing it when it counts, Leafs fans across Toronto and beyond have been seen in varying states of grief: denial, anger, bargaining, depression, and acceptance. There have been fights in sports bars, people drowning their tears in their ever growing alcoholism, and pleading to God to explain why he hates the Leafs so much. "It's the only explanation," die-hard Leafs fans Jessica Carrier told this reporter. "God must hate the Leafs. Because I've prayed and prayed and prayed for twenty seven years like my parents did before me, and they're still not winning the Cup! It's not fair!"
Reached for comment, the Almighty had this to say. "It's true. I hate the Leafs." 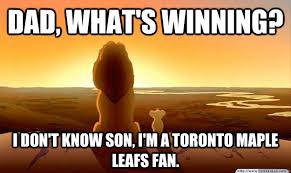 Toronto bartender Duff Riley was more philosophical. "It is what it is. People come in to see the games, they spend money, they root for their team, and then they get their hearts ripped out and stomped on. And then they buy more drinks to drown the pain. Our job is to sympathize and pour more of those drinks. So from our point of view... we're selling a lot of booze and seeing a lot of adults cry. Selling the booze is the important part. Don't quote me on this, but Leafs fans are morons." 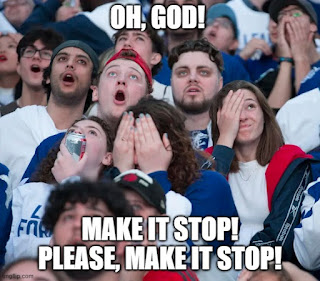 Three of the biggest fans of the team were seen in attendance at Duff's bar; all three of them are infamous for an incident several years ago in which they held the Stanley Cup hostage for a few hours and issued demands before getting their asses kicked by a cranky police inspector. They've since been banned from being near the Cup, which is usually housed in the Hockey Hall of Fame in Toronto. "It's like this, man," one of them told this reporter, half drunk already. "It's one big ****in' conspiracy! They're all out to get the Leafs! They're out to ****in' make us all miserable! The refs, the NHL, you name it. Harry and Jack know what I'm sayin'! It's ****in' unacceptable! Because that Cup belongs to us! Go Leafs go!!!!"
At this point the man in question threw up on this reporter's shoes. 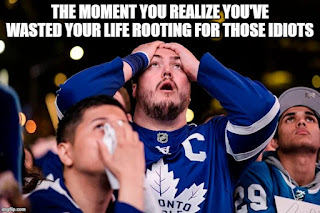 The five stages of grief, sometimes present in the average Leafs Nation fan every minute. Already online the bulk of them are making excuses and loudly proclaiming, "next year". As they did last year and the year before that and the year before that... and well, you get the picture. This has been a generational thing now handed down from their parents, fifty five years on, and it shows no indication that it will ever change.
Not that Leafs Nation can understand that. 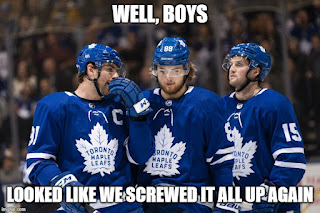 The Leafs themselves have packed up their locker rooms for the season. Some will be back in October. Others will move on- perhaps to retirement or to other teams (where they may actually find themselves on a playoff contending team that can get past the first round). Leafs management will continue to ask fans to be patient and make promises that it'll all work out in the long run. And Leafs Nation, some still in anger or denial stages, will at some point join their compatriots over the summer in proclaiming that this year will be their year. Despite it never happening. 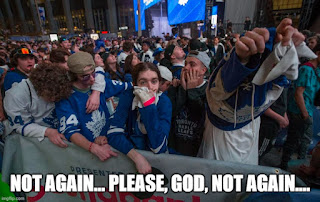 The last word belongs to a self-described recovering Leafs fan. James Porter is a Toronto attorney whose parents were Leafs fans. For much of his formative years, he was too. Until ten years ago. "I came to see the light. They're never going to win the Cup. I realized I was just getting my heart broken over and over again. My parents had been fans, and I had grown up with all that. And here I was, just part of the same cycle. I didn't want that anymore. Not for my kids. I didn't want them to get caught in that same vicious cycle. And so I broke out of it. I cut all ties, all those emotional bonds. And you know what? I'm better off for it. Better peace of mind than having your heart torn apart over and over again."
The wisdom of one who has learned the hard way. Too much to ask of so many members of Leafs Nation. 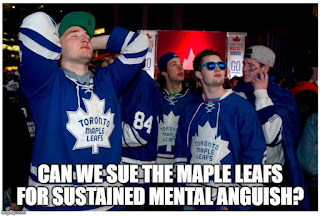 Posted by William Kendall at 6:00 PM