The Darkest Hours And The Strongest Voice 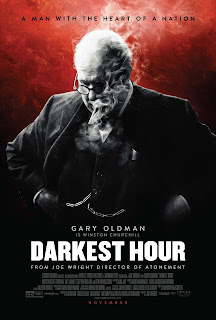 “He mobilized the English language and sent it into battle.” ~ Lord Halifax

“You cannot reason with a tiger when your head is in his mouth.” ~ Winston Churchill 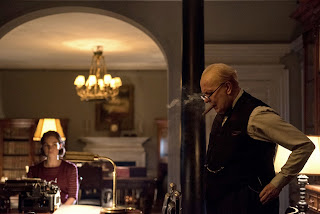 Director Joe Wright (Pride and Prejudice, Atonement) returns to the big screen with Darkest Hour, a film that hit theatres at the Christmas break and has already gotten critical acclaim for its portrayal of Winston Churchill at one of the most trying times in British history. The prime minister, who has often been depicted in film and television, is the subject of this film that shows him at a low point for his country- and one of his finest hours as a leader: the dark days of the fall of France and his defiance in the face of the German threat. 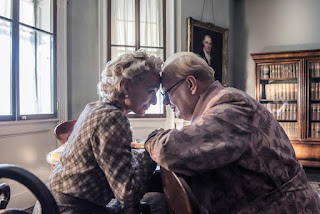 The film opens in May 1940, with Britain and France as allies against Nazi Germany. There is anger in Parliament, as Neville Chamberlain (Ronald Pickup) is pressured to resign over his weakness and earlier capitulation to the Germans. Chamberlain finds himself in a position where the only replacement in his party the opposition will support is the cantankerous First Lord of the Admiralty, Winston Churchill (Gary Oldman), who has always stood firm that the Germans under Hitler could not be trusted. Supported (and occasionally lectured) by his wife Clementine (Kristin Scott Thomas), Churchill pushes on in the face of political intrigue among his colleagues and the pressures of war to face down the looming German threat. 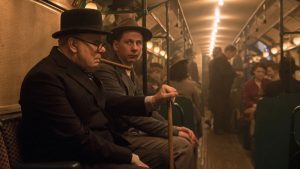 The script, by Anthony McCarten, has a tight focus in its narrative, concentrating on the early days of the Second World War, starting with May 1940 and moving through to Churchill’s momentous speech of defiance later in the year. The story strongly focuses on the personalities- the Churchills, Chamberlain, the foreign secretary Lord Halifax, King George- and the politics that can be biting and savage even from within a party. It also squarely sets itself right in the era, playing off the historical events of the time as its backbone. The film’s narrative ends up acting as a good counter-balance to this year’s Dunkirk, which mines some of the same material from the point of view of the men on the beach. 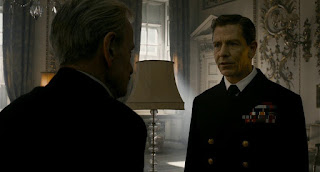 Wright is a fine choice as director. He works exceedingly well with actors, something seen in his previous works, but also has a good eye for the finer details, something that we see here. There’s an authenticity to sets, to props, to the little things that make up the world of a film, and Wright and his crew pay attention to that. His style as a director is well suited to character studies, which this film pretty much is. He paces the story well, so much so that while it’s a political procedural, it never seems to lag or wander off. And he presents the political intrigues of a cabinet that’s not quite so united as the story goes along; at one point there was a crisis within the cabinet, and Wright’s story goes into that. Had history gone another way, we’re left to wonder how radically different things might have been. 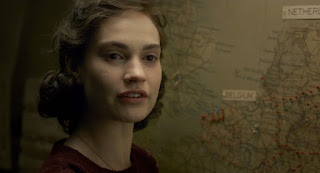 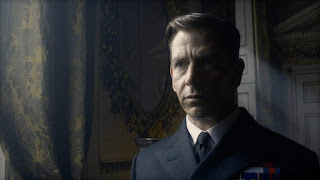 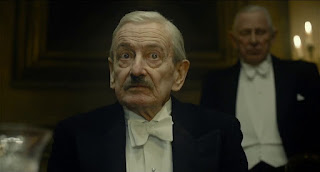 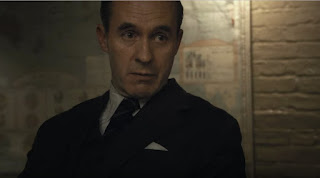 The cast is brilliantly chosen. Lily James appears as Elizabeth Layton, Churchill’s secretary, who has to learn how to manage her grouchy boss and help him along in preparing for the speech that will change the course of the war. Ben Mendelsohn, who recently turned up as the Star Wars villain in Rogue One, gets a more sympathetic role as King George VI, struggling with his own issues and his duty to his country. Ronald Pickup gets a lot to do as Neville Chamberlain, the prime minister forced out of his job due to his own weaknesses and yet seeking his own ambitions. And Stephen Dillane, a character actor who’s appeared in a lot of film and television work, turns in a fine performance as Lord Halifax, the Foreign Secretary who harbours his own ambitions in the face of war. 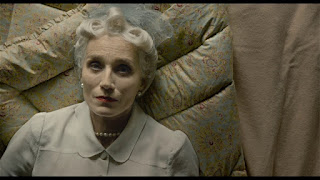 Kristin Scott Thomas is sympathetic and strong as Clementine Churchill, wife of the prime minister. Her character has spent her life with the grouchy, fierce, but principled Winston, knows his moods and his heart, and is one of the few people who can call him out of a mood and can sooth the occasional doubt. The actress conveys the quiet strength and fortitude of the character, and has a believable sensibility in how she and Oldman relate in their characters. 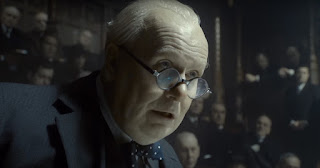 Winston Churchill has been portrayed by many an actor in film and television in the decades since his death, in performances that have played on various aspects of his personality. Gary Oldman’s take on the role deserves the Oscar for Best Actor. He brings to life the cantankerous, ferocious, spitting in the face of danger aspect of the man in a tour de force performance that leaves you astonished. Oldman is one of those actors who completely vanishes into the role with effortless skill- this time quite literally, as the actor vanishes beneath padding and prosthetics to look quite unlike himself. And he conveys the conviction and iron will of the man in just the right way. 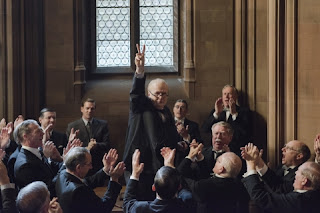 Darkest Hour is one of the year’s best films, and deserves to be honoured as such. While I still think Dunkirk is the best film of the year, this is a fine companion to it that merits an Oscar for its lead actor, a long overdue Oscar. It captures the tension and intrigue of a part of the Second World War when it seemed hope was lost. And then proceeds to find that hope in the spirit of a ferociously defiant man. This is a film you should see. 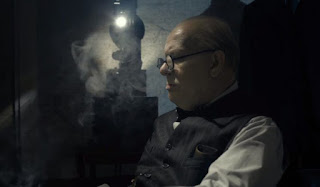