Risk And Redemption Along The Trail 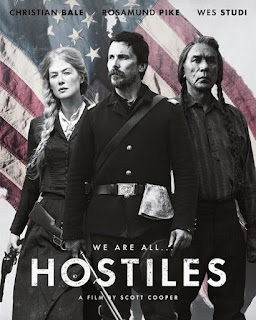 “Sometimes I envy the finality of death. The certainty. And I have to drive those thoughts away when I wake.” ~ Rosalie Quaid

“I’ve killed everything that’s walked or crawled. If you do it enough, you get used to it.” ~ Captain Joseph Blocker

Westerns certainly aren’t what they were at their height, from the 30s into the early 60s when it seemed that every other movie featured cowboys, Indians, dusty towns, white hats versus black hats, and saloon fights. That’s not really a bad thing, because over-saturation of the genre nearly destroyed it, and the films we see now in that genre tend to be more thoughtful, and certainly shades of grey as opposed to the white hat versus black hat simplicity of stories that never caught the tone of the real West. Hostiles is a new film out in theatres, initially in limited releases in 2017, and it takes its place as a great film in the genre, telling the story of a small group of people travelling through achingly beautiful landscapes… towards different destinies. Along the way, we find that there are no heroes or villains, and that redemption and reconciliation can come in unusual ways.

The film opens up in 1892, with Comanches killing a man and his children, while his wife Rosalie (Rosamund Pike) evades capture and hides herself. At a New Mexico fort, a cavalry captain, Joseph Blocker (Christian Bale) receives an unwelcome assignment. His commander, Colonel Abraham Biggs (Stephen Lang) informs him that he is to escort a dying Cheyenne chief, Yellow Hawk (Wes Studi) and his family back to their homelands in Montana. Blocker, who’s spent his life fighting Indians, doesn’t want the assignment, but doesn’t really have a choice- the President wants the job done, and Blocker will be drummed out of his job and lose his pension if he doesn’t do it. He gathers up a group of soldiers for the ride north with the Cheyenne, and their journey will bring them to cross paths with the angry and emotionally scarred Rosalie in the wilds of a West that is supposedly tamed.

Scott Cooper directed and wrote the screenplay, which finds its source material in an unpublished manuscript by the late screenwriter Donald Stewart, who had a hand in scripts for The Hunt For Red October, Patriot Games, and Clear And Present Danger. Stewart won an Oscar for another screenplay, Missing, a historical drama that dealt with the 1973 Chilean coup.  The story makes use of the era- the 1890s, when the frontier was supposedly closed and Indigenous peoples brought to heel. It examines the tensions between the American military and those they have subjugated, but also tensions between Indigenous groups. Where a John Ford western might have gone for the simplicity of treating all Indians the same, a more nuanced look like this film clearly shows the differences- the Cheyenne don’t particularly care for the Comanche, and their lives and cultures are quite different. The two Johns, Ford and Wayne, would have never bothered with that sort of notion.

The story also takes full advantage of the beauty of the western landscape- and contrasts that with the turbulence of human bitterness, anger, and world weariness. Blocker’s personality is that of a man who’s killed too often in service of his country that he’s stopped counting, while Rosalie, shattered by the deaths of her family, starts out from that broken place, counting any Indian as the same. Both characters, as well as those around them, have to come out of their initial viewpoints and see things differently. The story is one that definitely plays to the complexity of the history of the West, with shades of grey all around, with indigenous peoples examined in detail in ways that would have never been done in a film sixty years ago. Yes, it does move into that movie cliché of white people finding themselves by saving native people, but it does so in ways that are refreshing, while respectful of those native people. 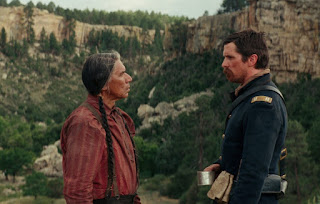 Cooper’s background as a director suits him well to the material. He started out as an actor but moved into writing and directing. The acclaimed character study Crazy Heart is one of his previous works, as is Black Mass. This film shows his strengths- his cinematography in capturing the wild, rugged beauty of changing western landscapes, is well done, and his experience as an actor shows itself in how he handles actors, bringing out terrific performances in them. There’s a lot of attention to detail throughout- the clothing, equipment, and locations all feel authentic, as if we’re looking a century plus into the past. Even the score feels very much drawn out of the old West. 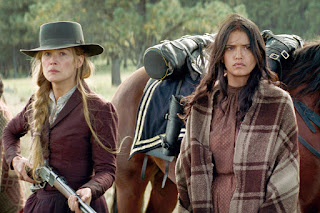 The cast throughout the film are well chosen for their parts. Stephen Lang is authoritative and tough, but also somewhat sympathetic as Colonel Biggs. Timothee Chamalet plays a young private, the wide eyed Phillippe DeJardin, nicknamed Frenchie, with a naïve quality that you might expect out of a new soldier on his first assignment far from home. Jonathan Majors plays Corporal Henry Woodson, a Buffalo Soldier who’s brought in on the detail, and plays the character with a calm energy.

Rory Cochrane makes an impression as a sergeant, Thomas Metz, who’s known Blocker for a long while. He’s as war weary as the captain, but reliable and steady as you’d expect out of a career soldier. Ben Foster, who worked with Bale in the western 3:10 To Yuma, appears as Sergeant Charles Wills, not as part of the military detail, but now marked as a criminal, and he’s brought along on the trip in custody to await judgment, which makes the character something of a wild card for the story. 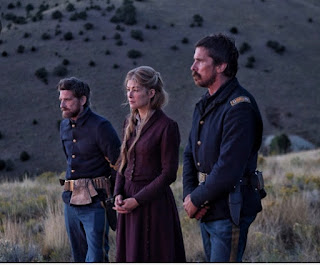 Adam Beach appears as Black Hawk, the son of the dying chief, a man who’s seen his people subjugated and broken down, but retains his own dignity in the face of all that. Q’orianka Kilcher plays his wife, Elk Woman, supportive and strong in her own way, a steady presence throughout the film. These are indigenous people with lives of their own, fully realized people that are far beyond the stereotypes we would have seen in a Western of the classic era. 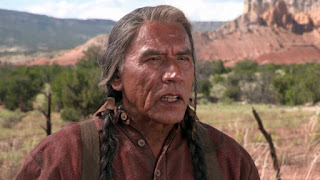 Wes Studi first made an impression on audiences as a ruthless Pawnee warrior in Dances With Wolves, and followed that up with his most well known role. Playing the antagonist Magua in Michael Mann’s The Last Of The Mohicans, Studi played the character as a ferocious force of energy, a man driven by the pain of his own past into revenge. A villain Magua might have been, but his actions are understandable. Studi would later play an iconic figure of the West, Geronimo, in the film Geronimo: An American Legend, opposite Jason Patric, Gene Hackman, and Robert Duvall, commanding the screen every time we saw him. Here he gets a great part as Yellow Hawk, a fully fleshed out man nearing the end of his life. We can see why he’s respected among his people as a chief, a man who’s sacrificed much for them, who has seen the days of his people pass into something he could not have imagined as a child. There is a weariness in the character, but strength and dignity too, even as he finds himself in a lowly place at the end of his days, part of a military detail taking him home to die. 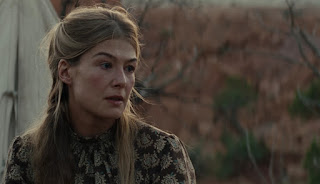 Rosamund Pike gets a fine part to play and makes the most of it as she goes along. Her Rosalie is a woman who finds her world completely shattered in a terrible moment. Her husband and children have been killed, and she’s witnessed it. In some ways it’s broken her spirit, driven her mad- something that is understandable. She holds a grudge, viewing all Indians the same- her initial hostility towards the Cheyenne family reflects that. Her journey as a character requires her to deal with her grief and emotional state- as well as come to terms with the fact that her anger is at times misdirected. The actress plays to that, bringing the grief stricken widow who forges on to vivid life. It’s a role that’s quite different from some of her previous work- Die Another Day, Pride & Prejudice, Gone Girl, or Wrath Of The Titans- but she makes it a compelling role to watch. 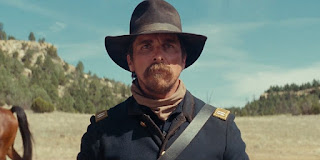 Christian Bale is a perfect choice for Blocker. As an actor he possesses that ability to disappear into the role in an understated way, and his character here is a world weary, cynical soldier who’s spent his life fighting and killing for his country- so much so that he’s lost count of the dead. He’s the sort of man who believes in God, and yet curses God’s creation. And he comes across, even though he doesn’t want the assignment, as the sort of officer who’s capable in his command. Blocker is the sort of officer that soldiers will follow, and Bale plays to that, as well as to the cynical weary quality of the man. It becomes a powerful performance, yet another one in a career of strong roles that is continuing to see the actor as one of the best of his profession. 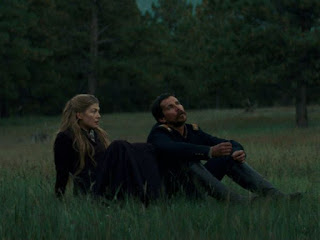 Hostiles is not a light hearted film. Dark, powerful, and brooding, it contrasts the achingly beautiful landscapes of the west with the brutality and callousness of human nature. The story presents no traditional Western hero and villain, but a complicated shades of grey tale where everyone has complicated nuances with flaws and virtues. With its themes of agonizing grief, journeys, aching for home, and redemption, it proves to be one of the best Westerns in the genre.