The Ending Of The World In Paradise 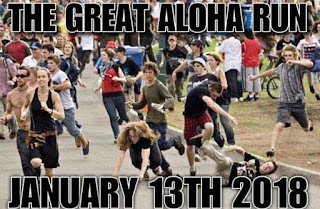 Los Angeles (AP) Just days after the false alert sent out to Hawaii residents about a missile launch that wasn’t happening, the state continues to deal with the fallout of the error. Residents and tourists who were badly shaken up by the notion of incoming nuclear missiles and the end of their lives are still asking for answers as to why it took thirty eight minutes for the word to officially get out that the entire matter was an error. Experts are pointing out how dangerous mistakes are in a world of high tension and nuclear missiles. The individual responsible for the matter, a Minion by the name of Kevin, has issued an apology and his employer swears it won’t happen again. 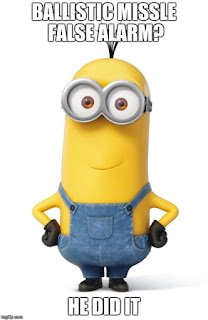 The president shrugged the whole matter off, preferring to work on his golf game, effectively telling Hawaiians that if a nuclear attack actually did happen, they were on their own. Chief of Staff John Kelly told reporters, “Look, it’s Hawaii. He hates Hawaii. For the same reason he hates so much of everything. President Obama vacationed there on a regular basis and enjoyed it. If there’s anything with an Obama signature or special meaning, the dimwit wants to destroy it. Wait, are you recording this?”

This reporter, doomed to work for a cranky editor (editor: shut up!) who is in effect under a permanent restraining order barring any contact (editor: threatening to kill you is not enough reason for a court to put me under a restraining order!), has often found himself on pointless assignments sent by his cranky editor. Such was the case yesterday when real reporters, accompanied by a horde of gushing entertainment reporters, dropped in at the offices of Platinum Dunes, one of the production facilities owned by one of the world’s least skilled film directors, Michael Bay (editor: stop making fun of Michael Bay! I love his films!). 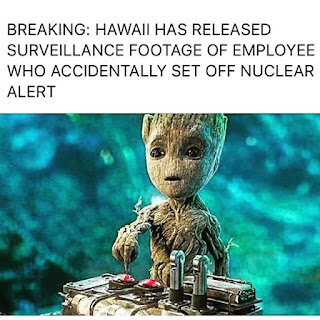 The real reporters assembled in a large hall where we’d been held before. The entertainment reporters, vastly outnumbering us, were all around, chattering about what new project in the long line of films the director had in the pipeline might be announced, or if this was a status update for one of those films. Bereft of intelligence, the entertainment reporters were quite an irritant to have to put up with, something they were oblivious to. The real reporters, each of us doomed by cranky grouches (editor: what part of shut up do you not get?) to be here, knew we’d have to put up with it.

A spokeswoman called for the attention of all. A podium was set up on stage, with the customary full length mirror standing right beside it. “Ladies and gentlemen, it is my great privilege to present, and your great privilege to witness… the arrival of the one, the only…. Give it up for the greatest director of all time, Michael Bay!” 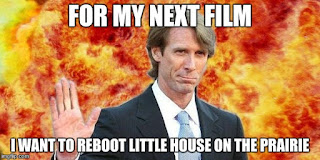 The entertainment reporters broke out into rapturous applause. This reporter wondered what the spokeswoman’s salary was, to have to put up with that much praise for her boss. Bay strode out on stage, dressed as usual: jeans, blazer, denim shirt unbuttoned at the throat. He had his usual three days of stubble and disheveled hair look going on. And as usual he was grinning like an idiot, the same deer in the headlights vacant expression in his eyes.

“Hello!” he called out, striding forward, smiling at himself in the mirror and giving himself a wink.  Looking out at the crowd, he nodded at the applause and cheers of the entertainment reporters, while oblivious to the disdain of the real reporters who saw him for the dimwit that he is (editor: what did I tell you about insulting Michael Bay???). Finally the applause died down, and the director began to speak again. “You know, like so many of you I keep an eye on the news. For inspiration. Such is the case in the last few days. I mean on the one hand, there’s my new project I’m planning on making called Stable Genius. Which is going to be a great film. A great film! Everyone’s going to love it. But I also got another idea for another great film. The kind of film that’ll make grown men cry and win me Oscars.” 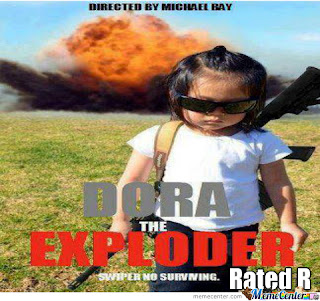 This reporter had hoped that Bay would be announcing his retirement effectively immediately, and entering a vow of silence. But as the Rolling Stones say, we can’t always get what we want. Bay carried on. “That missile launch alert on Hawaii. What a story. People thinking their world is ending, because of a mistake. The dread, the horror, the big question about what you would do if you thought the world was ending. Which child of yours back home would you call, and which one would you ignore. Would you have a drink? Say a prayer? Have sex with your significant other? Have sex with whoever was closest by and looked good waxing a car? Would you listen to an Aerosmith tune?” 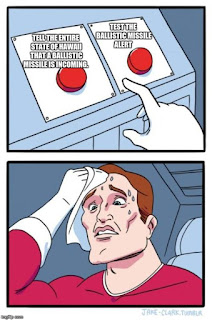 Bay paused for a moment before carrying on. “Here we’ve got a situation where people think you’ve got ten minutes left to live. What a story that is. Now as you know and I know, ten minutes is way too short for a movie. Which doesn’t matter, because I’m here to announce another film, a two hours forty five minutes masterpiece, Hawaiian Punch, which is going to tell the story of how people spent those ten minutes. And then the twenty odd extra minutes before the word went out that it was all a mistake and there was no missile launch.”

The entertainment reporters broke out into applause. Bay smiled. Real reporters sighed in exasperation. Bay carried on. “Now of course, how to fill out that forty minutes of story time with more story. Well, we’ve gotta have back up material. Like tensions in the north Pacific between one superpower led by the world’s oldest baby on the one hand, and a nuclear armed hermit kingdom led by a cake eating whiner. And we’ve gotta have our main characters, all on that island. And since this is a Michael Bay movie, we’ve gotta have explosions.” 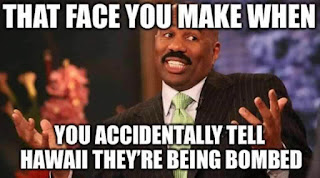 “You are aware there was no explosion on Hawaii?” this reporter asked.

“Don’t bother me with details,” Bay countered. “What I’m thinking is from one character’s point of view in those ten minutes, imagining that worst case scenario playing out before realizing that’s a dream. She’s seeing the bomb drop, seeing it go off, seeing the mushroom cloud wipe out paradise. The biggest explosion ever done on film. Now I asked the military to give me a nuke and let me set it off somewhere in the Pacific just so I can film a nuclear explosion. They told me to go **** myself. I don’t know why people keep telling me to do that.”

“Mr. Bay, have you ever heard of a film without explosions?” another reporter asked. 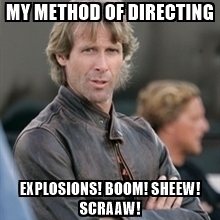 “What would be the point of that?” Bay replied, looking confused. “Now look, okay, so there was no actual incoming missile. Doesn’t stop us from screwing around with a character’s head, right? And it doesn’t stop us from having a fictional plot about a deranged hacker screwing around with the state’s emergency management plan. I know what they’re saying, that some Minion was behind this, but wouldn’t it be better if we had a crazy computer hacker trying to terrorize people in paradise? And if that hacker happened to have himself a healthy supply of C4 explosives? And if the only thing that could stop him was the cop on vacation? That’s the kind of story I want to tell. So without further ado, let’s start bringing out the cast. Ladies and gentlemen, he’s my go-to guy on films, and you all love him. Give a big hand to the one, the only… Shia LaBeouf!” 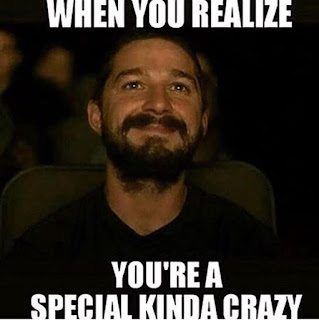 LaBeouf strode out on stage, waving. “Hello! Shia is happy you are here! It is good that you have come to see Shia!” He walked over to Bay, shaking the director’s hand, smiling in a way that was as idiotic as Bay’s smile.

“Shia is our hero of the film, the hero cop who just wants some time off. We’re calling him Jack Savage. Isn’t that a great name?” Bay smiled and nodded. The entertainment reporters gushed. “And playing his love interest, the local doctor who gets caught up in everything, the brilliant and sexy Callie Alana, say hello to Megan Fox!” 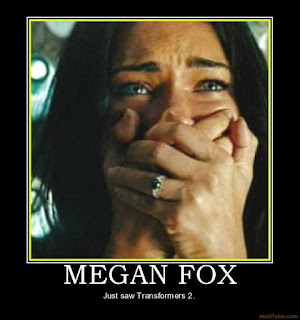 Fox strode out on stage, dressed in the usual style- short skirt and low cut cleavage. She blew a kiss to the crowd and displayed her assets before walking over to join Bay and LaBeouf. Bay faced the crowd again, and said, “And playing my villain, the mad hacker Cyrus Slaughter. Isn’t that a great name for a villain? One of my favourite actors, and he gets how to play an eccentric. Give a big hand for Nicolas Cage!”

Cage stumbled out on stage, looking suitably deranged, carrying a bottle of scotch. “Hey there!” he called out. “Nice to see you!” He fumbled his way over to the others, taking another gulp of the scotch. This reporter sighed, wondering how many bottles of booze Cage had already downed today. 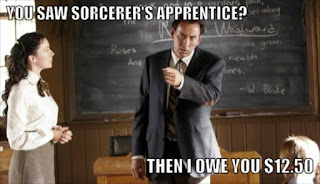 “Ladies and gentlemen, this is the heart of the cast of Hawaiian Punch, coming soon,” Bay told reporters. “Oh, sure, we’ll be casting other parts. I’m thinking Jon Voight as the unnamed president of the United States. I’m trying to convince Ice Cube to come on board as a cranky police captain in Honolulu. And I’ve got to fit Steve Buscemi in there somewhere. Even if he told me to go **** myself. We’re gonna have Aerosmith do a theme song. We’re gonna have hot babes waxing cars and car chases and explosions and quick cut edits and more explosions. Anyway, we’ll get on this film, and when it comes out, it’s gonna be big, it’s gonna win Oscars, it’s gonna get me respect.” 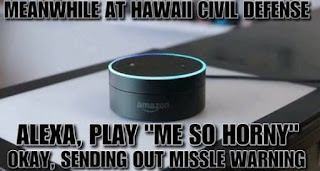 “But you’re an idiot,” this reporter countered.

Bay laughed. “That’s hilarious! Great joke, buddy! We both know I’m not an idiot. Thanks for coming out!” The director and actors left the stage. The entertainment reporters chattered among themselves about the project. Real reporters took their leave, grumbling amongst themselves about distant editors with no sense of humour (editor: I swear to God, I’m going to strap you to a nuclear missile and launch you at North Korea).

This reporter advises his reader to avoid the company of his editor at all costs. His editor’s brain is a few chapters short of a complete book. 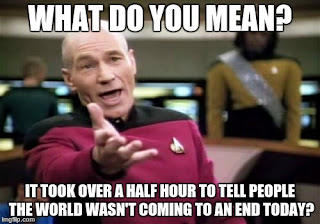