Musings Of A Talk Show Candidate 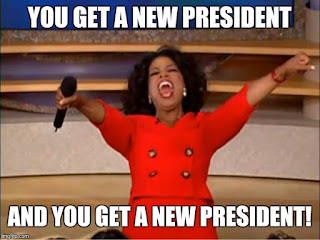 Washington, DC (AP) While the Trump presidency continues to fumble its way from disaster to disaster in recent days- the ‘stable genius’ debacle, the racial slurs towards African nations and Haiti, the lack of a response to the false alarm in Hawaii- other names are starting to emerge for the 2020 election. The Golden Globes seemed to provide a launching pad for one of those names. Oprah Winfrey, the former television talk show host, production company mogul, and billionaire based mostly on branding herself, delivered a stirring speech to the audience that left some wondering why she shouldn’t run for office. 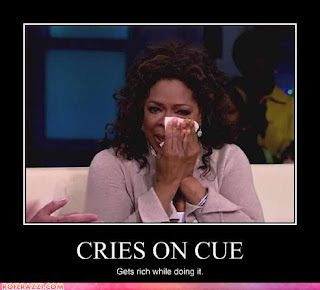 “President Oprah. Has a nice ring to it,” Stedman Graham, Winfrey’s longtime partner mused when asked. “That would make me the First Dude, right? Anyway, she’s certainly a whole lot more qualified than the guy who’s in there now, not to mention far more pleasant and empathetic, but let’s face it, anyone would be compared to him. Should it matter that she’s never held political office? Of course not. In the end, it’s her decision, so just wait and see.”

Winfrey herself, approached at a gala in New York, was cryptic as to her intentions. “It’s a nice idea. And sure, I would absolutely do a better job than Trump. I’ll concede, that’s a pretty low bar to step over. I’ve had guests on the Oprah show who you’d think of as the most pitiful people you can imagine, and they’d do better than Trump. Look, it’s a decision that takes time to make, that should be thoroughly considered. I mean, do I want to spend the rest of my life being followed around by the Secret Service? Do I want to go into Congress to do the State Of The Union and call out, ‘You get an amendment! And you get an amendment! Everyone gets a constitutional amendment!’ I haven’t decided that yet.” 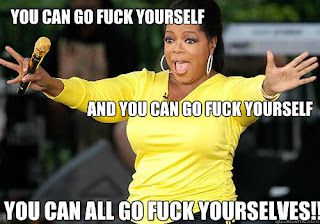 The fact that she’s never held office concerns many. “Has this country not learned anything from electing Trump?” presidential historian Wallace Wentworth asked this reporter from his offices at Yale. “Television personality. No political experience. Surrounded by sycophants and yes-men. Has never learned about pragmatism in the political office. Oh, sure, she’s much more polite than the Orange Neanderthal, but that doesn’t qualify her to be President. We need experience in that job, not narcissistic people who have never had to compromise and have never before served in a public office. That includes both sides of the political aisle.”

“Hey!” Trump snarled while reporters asked him about the professor’s remarks. The chief executive was in the midst of yet another go at the golf course at Mar-a-Lago rather than doing his job in Washington. “I am not orange! And what the **** is a Neanderwarhol? Ivanka! Go find a dictionary for Big Daddy!” He paused, looked at the media, and added, “Don’t you go quoting me on that! Fake news! Unfair!” 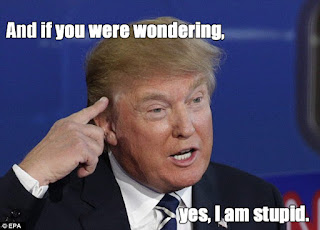 “Yes, she understands empathy,” Princeton sociologist Hannah Prentice conceded when asked at her office. “Yes, she has that feel-good sensibility that just makes people think she’s their friend. But realistically speaking, those are qualities better suited in a preacher, not a president. Those are two very different jobs.”

Which, admittedly, has never stopped Mike Huckabee, the minister turned politician, from making runs at the Republican nomination in the past. In fact, Huckabee, also the father of the current White House press secretary, Sarah Huckabee Sanders, is musing having another go at the nomination in 2020. “Let’s face it, that half-wit dumbass mother****er is going to implode any day now, and when that happens, there’ll be plenty of space for good ol’ Mike Huckabee to come on in for the next election as the GOP’s candidate of reason and compassion and creationism and hellfire and brimstone and women knowin’ their place is in the kitchen and persecutin’ the gays and… wait a minute, you’re not a reporter, are you? Dammit, don’t quote me on anything I just said, or I swear to God, I will end you!” 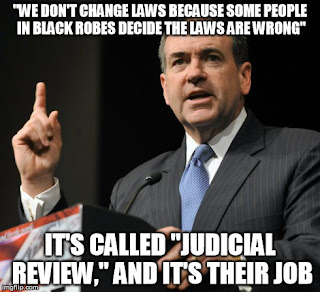 On a different note, the individual responsible for the false alarm of incoming ballistic missiles into Hawaii a few days ago has been identified. Answering only to Kevin, the small yellow creature has been identified as a Minion. When reached at his employer’s lair, the Minion said something garbled that has been translated to “oops.” Authorities have decided not to pursue the matter.