Booting Out The Foreign Secretary 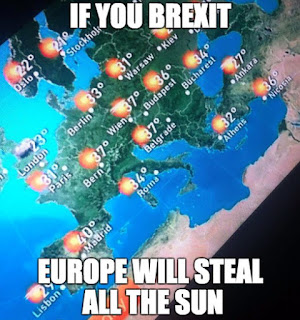 London (Reuters) In the wake of the Brexit vote to leave the European Union, the United Kingdom seems not so united. Scotland and Northern Ireland voted to remain, while England and Wales chose to leave. The emotional scars between both the Leave and Remain campaigns are fresh. Former Conservative prime minister David Cameron resigned from his office. Tory politician Boris Johnson, who was one of the loudest voices in favour of leaving, chose not to pursue the post of PM. Labour leader Jeremy Corbyn lost a vote of confidence from his party. UKIP leader Nigel Farage, another voice in favour of departure, chose to resign from public life.  Theresa May has ascended to become prime minister, and must now navigate the tumultuous waters that make up the Brexit divorce from Europe, and all of its potential consequences- economic, social, political, and more. 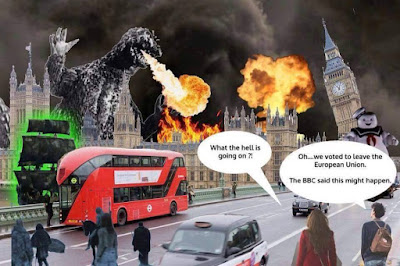 That has included a cabinet shakeup. While Boris Johnson has been heavily criticized for his decision not to pursue the prime minister’s office- not because that many people wanted to see him at Ten Downing, but because the man was shirking taking responsibility for the calamity he had helped unleashed- that didn’t stop the man from getting into the new cabinet. Some describe Johnson as the British Donald Trump, and others calling him a modern day Barney Rubble. Long since prone to gaffes and head shaking comments on many issues, the former mayor of London rose to national politics alongside former schoolmate and- some say- bitter rival Cameron more recently. His advocacy of the Leave campaign was in opposition to Cameron, who wanted the United Kingdom to maintain its relationship with the rest of Europe. 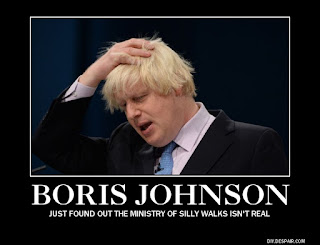 Johnson often has the look of a man who’s slept in his own clothes and has never heard of a hairbrush. Perpetually unkempt and rumpled, he has a long standing reputation as something of a dimwit, which makes one wonder just how he got as far as he has in life. Certainly this reporter’s experience with the man confirms that reputation. Since taking on the post, he’s refused to apologize for the “rich thesaurus” of insults and controversial remarks he’s made about many parties, caused US Secretary Of State John Kerry to shake his head with dismay in a joint press conference, and earned the disdain of the Queen after calling her the Corgi Queen.

“We are not amused,” the Queen was heard to say. “And we are considering reopening the Tower’s prison section to house that bloody git.” 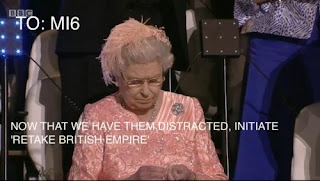 Git, the English insult for an unpleasant or silly person, is one apt description for Johnson. So when his oldest friends describe him as a tosser, prat, and wanker, it’s not that hard to disagree, particularly after watching the unkempt oaf blunder his way from pratfall to pratfall. At a recent press conference, Johnson got caught up in his own turn of phrase. “Look, it’s all very simple. The timing wasn’t right for my ascension to the prime minister’s office. I wasn’t being a gutless coward, despite what you people might think. I wasn’t shirking my responsibilities. By the way, what does shirking mean?” 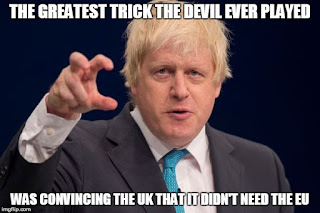 Johnson looked confused for a moment. One thinks that’s his default expression. “Anyway, I decided that it would be much better to not put my hat into the proverbial cube to be PM. It would be better if I ended up in the cabinet, where I could spend a year or two thoroughly undermining whoever ended up being the PM until I’m ready to be PM, in just the most underhanded and despicable way. Bwaaaah ha ha ha ha!” This reporter can attest to the fact that Johnson’s laughter is disturbing.

“You said it out loud,” one reporter replied. 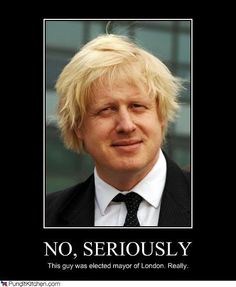 “That’s just a matter of you said I said. You can’t prove a thing,” Johnson boasted, grinning like the halfwit that he is.

“Actually all those cameras recorded it, and lots of us have digital recorders,” another reporter told him.

Johnson’s eyes went wide. “Well... um. Yes. Right. Well. Well, all I can say to that is... I was just joking. Really, believe me, it’s just a joke, that’s all. I am not going to do a single thing to undermine the PM. I swear, my saying that was just pulling a gag.” 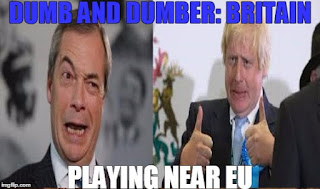 For the last word, we turn to the former Foreign Secretary, who was removed from his post. It was a startling decision, given the high esteem and respect given to him during his time in the position. Many world leaders expressed disappointment in the switch, while testifying to their appreciation of the former Secretary. “A wonderful diplomat, very thoughtful and articulate, always the right touch in what he had to say,” Chancellor Angela Merkel remarked. 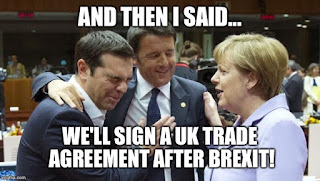 French President Francois Hollande was in agreement. “The finest chief diplomat I can think of to ever serve the people of the United Kingdom, a true statesman and a gentleman. Why Prime Minister May chose that despicable idiot to replace him is just... baffling.” 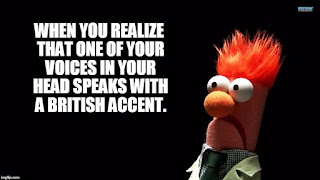