First things first, go on over to Norma's blog for her look at autumn in St. Louis. In the same vein, over at her blog, Auden is looking at fall colours in Brooklyn. And if you peek over at AngryParsnip's blog, Hamish is in Scrooge mode. While over at the Real Maple Syrup Mob, Fleur, a higher form of life, is finding new uses for an item of clothing. Now then, it's going to be a bit of a busy week, and I'll be adjusting my blog accordingly. I will be posting again on Friday instead of Wednesday, and a week from today is Remembrance Day, so I'll be posting something on Sunday with that in mind. Today I've decided to turn my attention to another film review, something that I saw again recently after a long time. 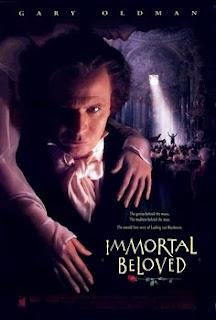 "While still in bed my thoughts turn towards you, my Immortal Beloved, now and then happy, then sad again, waiting whether fate might answer us- I can only live either wholly with you or not at all." ~ Ludwig von Beethoven 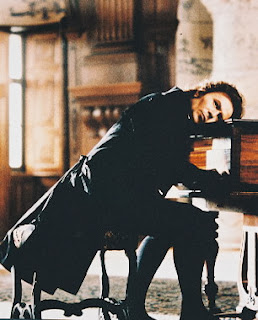 After the death of Ludwig von Beethoven, a letter was found among his effects by his secretary, Anton Schindler, an unsent love letter to an unknown woman whose identity has fascinated scholars ever since. There are several candidates for this mystery woman, but we might well never know. The director Bernard Rose speculated on it in his 1994 film Immortal Beloved, and while his theory and the way he tends to play around with history annoyed scholars (to say the least), it's the film itself that I'm addressing today. 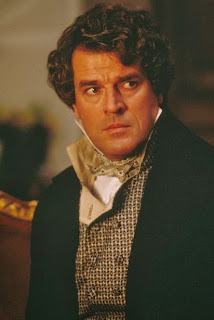 The story starts with the death and funeral of Beethoven (Gary Oldman), and the discovery by Schindler (Jeroen Krabbe) of the letter in the aftermath, which points to this mystery woman as his heir. The film then follows Schindler as he searches for the identity of the woman and where she might be. His journey takes the viewer through flashbacks of the composer's life, his triumphs and tragedies, the dark stormy personality and history of the man, and the musical genius of the composer. Beethoven's life plays out before the sweep of history, and we get to understand this enigmatic man. We meet some of the women Beethoven knew, particularly Giulietta (Valeria Golino), a woman he once tutored and courted, Anna Marie (Isabella Rossellini), the countess who shared his life for a time, and Johanna von Beethoven (Johanna Ter Steege), his brother's wife, with whom there was bad blood. For Schindler, it's a deeply personal mission to uncover the truth; he feels he failed the maestro in life, and peace can only be found in the truth. 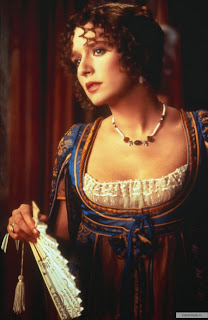 The music is the core and heart of the film, as in this case it must be. The late conductor Sir Georg Solti was brought in early as the music director, and the music of Beethoven fills the entire film, both the exquisitely beautiful music and the stormy darkness the composer was capable of. Where the usual tendency by a film composer is to adapt the music to the edited work, in this case, the film was edited to compliment the music. Oldman himself, in preparing for the role, was told that to know Beethoven, one must listen to the music, because everything about him went into that music: passion, love, rage, heartbreak- it was all there. Rose is judicious in where he makes use of the music as well. He wisely refrains from using elements of the maestro's masterpiece, the Ninth Symphony, until near the end, a sequence with an elderly Beethoven at the symphony's premiere, remembering the distant past. The sequence takes on a transfigurative quality with the music as the old man remembers a night from his boyhood, and is one of the key scenes in the entire film. The placement of the music and the scene at that moment in the film is crucial, and it pays off. 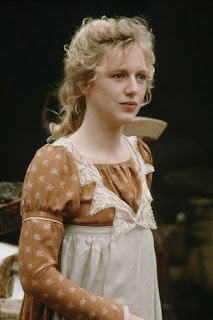 Rose assembled an exceptional crew for the film, taking on location shooting in Europe, in places both grand and ordinary, but certainly feeling like they were straddling the eighteenth and nineteenth centuries. There's a tremendous amount of attention to detail paid in costuming, sets, and props, and that shows itself throughout the film. The story itself- while no doubt messing around with fact- nonetheless serves its purpose. It shows us a genius, both the good and the bad of him, the dark stormy personality, and ultimately a man who finds peace of a sort in his greatest work, late in life. In fact, the film's final act, while heartbreaking (particularly an almost dialogue free scene between two people involving writing on the margins of sheet music) is also uplifting. 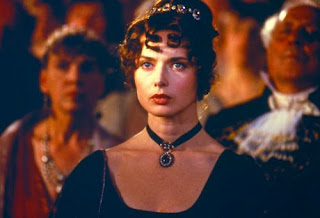 The assembled cast is impressive, to say the least. Valeria Golino has done most of her work in Europe, and here plays an impulsive woman, a composite sort of character who is first repulsed by the maestro's rudeness, and then drawn to him. There is tragedy in her story as she relates it to Schindler, things hinted at that we see later. And she learns the hard way about Beethoven's increasing deafness, a lesson that leads them to a parting of ways. It's an interesting performance, particularly in her looking back after the fact and giving the audience hints of her story.

Johanna ter Steege is a Dutch actress, and the pivotal role of Beethoven's sister-in-law is hers. She must convey different aspects of this character, the tensions and unspoken words tainting much of her scenes with Oldman. It's a complex and riveting portrayal of a woman through years of her life, a woman who suffers tremendous losses, and the audience has to accept her in the role- and to feel sympathy as well. She succeeds in conveying that in her performance. 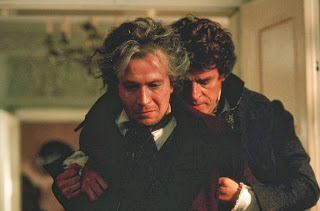 Isabella Rossellini is well cast as Anna Marie. Schindler tracks her down in a quiet country inn, back among her people, and there's a great warmth in the character. We find that she's suffered terrible losses of her own, and for a time, she and Beethoven were happy in each other's company, until his volatile personality sent him down a path of destruction. Still, she misses him, shares memories with Schindler, and both in the past and the present as she recounts her story, the audience is given a look at a woman with depth and personal strength. She's long been a personal favourite actress where I'm concerned, and this is one of her best performances.

Jeroen Krabbe is a Dutch actor for the most part; international audiences might well know him best as the friend turned villainous doctor in The Fugitive. The narrative follows him, so we have to see things through his eyes. Schindler might well be the only character who can put up with Beethoven at his stormiest- and he does take a good deal of abuse from the composer. Still, he's determined to uncover the identity of this mystery woman, and Krabbe has the gravity as an actor to convey that seriousness, as well as giving the character an aura of calm, an important quality for someone spending time around a tumultuous man like Beethoven. There are even moments of humour in the performance, and we get to like him. 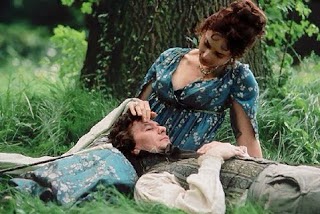 It is Gary Oldman's take on Beethoven that is astonishing. Oldman is one of the best actors around, a chameleon who vanishes into the role, inhabits it and lives it. This serves him well playing the greatest composer of music in history. We see him in flashback, through the eyes of others, and yet in his performance we also see the genius of the man. We see his passions as a young man, his frustration as his deafness takes hold as the years go on. This is a proud man, a detriment at times, but a proud man nonetheless. And we see a stubborn, angry man at his low points, a stormy soul raging at the world. It's a tremendously complicated role, with contradictions aplenty- he's capable of gentleness and cruelty alike, but it makes Oldman's performance so compelling. We understand his pain, what drives him, and despite those moments when his rage is all he has left, we feel sympathy for him nonetheless. There is tenderness, anguish, and even madness in that performance... and ultimately redemption. 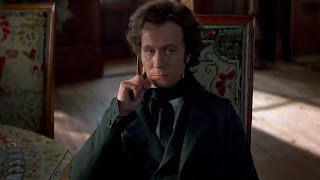 Rose's suggestion for the Immortal Beloved Beethoven wrote the letter to is doubtless conjecture. It's been dismissed by many scholars. And yet the film itself works. It gives us tour de force performances by actors who are at the top of their profession, particularly the lead. It takes us back in time, giving us a story that brings us through the highs and lows of a life. It is a passionate story, one rich with detail, and it is infinitely complex. And for good measure, it includes a variety of music from a man who created the closest thing anyone has ever come close to perfection. 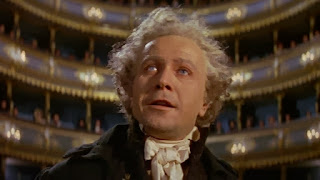 Posted by William Kendall at 7:38 PM