One Morning In The Somme

Before we get things started today, go on over to Norma's blog for her movie review for Thor: The Dark World. It's a good one. Now then, tomorrow is Remembrance Day in Canada. While it goes by different names elsewhere in the world, November 11th, the last day of the First World War, is commemorated to honour the war dead and the veterans of wars in many places across the globe. Aside from this post, keep an eye out at Sacred Ground where I wrote a guest blog for Lyn on the soldier and poet John McCrae. And have a peek at Kittie's blog, where she is paying tribute to the U.S. Marines. I'll be attending the national ceremonies here at the War Memorial tomorrow, as well as taking in things at the War Museum in the afternoon. There will be pictures to come, and you can find Remembrance Day posts starting tomorrow at my photoblog. Today, I'm going back in time nearly a century, to a dark day in the fields of France... 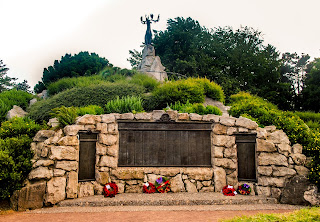 Each Canada Day, before the crowds start to build in downtown Ottawa, a solemn ceremony takes place at the War Memorial. A wreath is laid in memory of a terrible July 1st from the First World War. It is in memory of the Royal Newfoundland Regiment, which served under British command in the Great War, and would pay the ultimate price on a bloody July morning during the Battle of the Somme.

Until 1949, when Newfoundland joined Confederation, the province was under British jurisdiction, and Newfoundland soldiers served overseas in that conflict. A regiment sized force was sent to Europe, serving in the Gallipoli campaign under the Newfoundland Regiment name. By March of 1916, it was transferred to the Western Front, where by a trick of fate, it ended up in line at a place called Beaumont-Hamel. 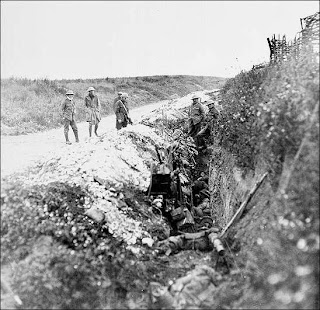 What would end up being called the Battle Of The Somme is often characteristic of the futility of the First World War: an entire generation of young men, killed, wounded, or forever marked by the horrors of war, sent by officers employing tactics from the days of Napoleon.... against machine guns, accurate artillery, and poison gas. It was only towards the end, during the Hundred Days, when someone figured out how to coordinate attacks with combined arms fighting, that the stalemate would finally break. The Battle Of The Somme, which would kill or wound over a million men, saw its first day on the first of July. 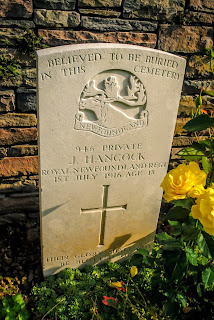 Nearly eight hundred soldiers and officers of the Newfoundland Regiment set out that morning from positions following the explosion of a mine shaft beneath German lines. The explosion alerted the Germans to the impending attack, and there was confusion and miscommunication from the British command about what was happening with British units on the field. The men moved out onto the field of battle from their trenches, into the line of fire... and into history. Within a half hour, of the seven hundred eighty men who moved out from the trenches, only one hundred ten emerged unhurt, with little more than half of that number still fit for duty the following day. A casualty rate of eighty percent, it pretty much finished off the regiment, and actually ended up being the second highest fatality rate of an attacking force during the battle. 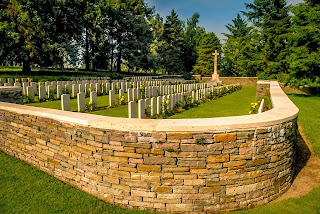 It is a wound that remains among Newfoundlanders even today, a profound shock to the system. Canada Day is also Memorial Day for Newfoundlanders, the reminder of one terrible day for so many of their own far across the sea. The shattered regiment's remnants was given the prefix Royal by King George V- a very rare distinction- and the battlefield was purchased by Newfoundland following the war, the largest portion of the Battle of the Somme to be set aside. The Commonwealth Cemetery at Beaumont-Hamel contains the remains of those who fell, in neat rows with white gravestones. It's a peaceful place, surrounded by preserved trenches and rolling ground... and yet the possible presence of unexploded ordnance still in places decades later. There are memorials there to the 29th British Division, as well as the 51st Highland Division, both of which suffered appalling losses during the battle, and the place is dominated by the Newfoundland Memorial, a bronze statue of a caribou that stands sentinel over the fields.

On November 11th, we gather at cenotaphs to remember and honour the war dead and the surviving veterans, not only of the Great War, but those before and since. The veterans of the Great War are all dead now; those with direct memories of that time are fewer by the day. The veterans of the Second World War that finally resolved so many issues are a dwindling number in countries across the world. It is to us to remember their stories.

It is places like this, where men who fought for King and country far from home, that resonate in Canadian history, even before Newfoundland was part of our country. Beaumont-Hamel is one of the places I must see with my own eyes someday, to walk the paths, see the graves, to truly understand that terrible morning nearly a century ago. 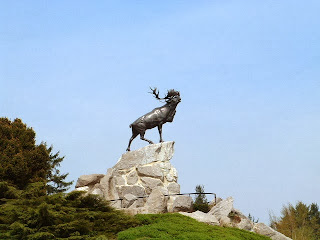 Posted by William Kendall at 7:47 AM