A Rich Widow Of A Dead General 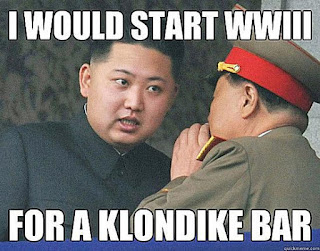 And so it is that they turn up. I speak of course of the inevitable presence of that foul, wretched, reprehensible species known as the internet scammer. The waste of oxygen that can't take a hint and just drop dead. They infest our posts with their crap, only to have it deleted. They send us random emails (along with the same email to hundreds of thousands of other email addresses) promising untold riches if we just help them with their resident cause/ moving of money. Such as the following, which ended up sent to my partner in crime Norma. It bore all the tell tale signs of homo sapiens spammeritis irritatingus. 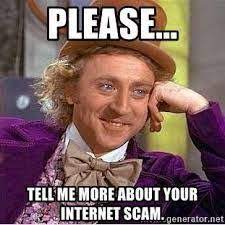 My name is Gil Williams, an Attorney/International Relations Consultant, I want to know if you will support my client to invest in your country and get rewarded financially without leaving or affecting your present job. I represent Mrs. Kim Kyong-hui, wife of Jang Song-thaek, Jang Song-thaek was Kim Jong-un's uncle and the Vice Chairman of the National Defense Commission of North Korea until his execution in 2013. Mrs. Kim Kyong-hui thaek here in after shall be referred to as my client and it is on her instruction that I am doing all that i am doing now. She is looking for a foreign individual or a corporation that can profitably invest US$150 Million on Real Estates outside Hong Kong. Mrs. Kim Kyong-hui is willing to reward you with 10% for your partnership role when fund successful transfer in your account. Write back for more information. 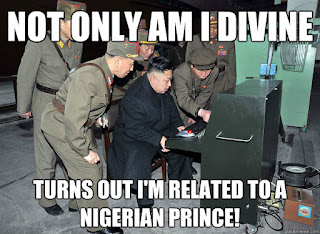 Where to begin? Well, at the end. I've removed the email address from the end, since it was a link. But the name was a completely different one from Gil Williams. It was Rick Yearltonnesen, which totally sounds like a real name. I mean that. And its country code? Ru. Which is Russia. Which is a huge red flag. Because nothing good is being done in Russia these days. 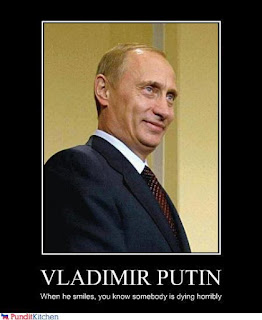 That's right, Vladimir, you poison-happy psychotic, I'm referring to you.
So our scamming scammer gives us some of the usual tell tales of an internet scammer. Introducing himself with a very English sort of name (though when's the last time you heard someone named Gil?) He claims to have two different roles, as an attorney and "International Relations Consultant." That's usually how it starts. You know, for an attorney with an English name, he doesn't have a strong grasp of sentence structure or how the English language works. Because while there aren't the usual glaring spelling mistakes, we do see sentences that should be punctuated differently, capitalized words that don't need it, and the sort of phrasing that comes from not speaking English as your primary language. 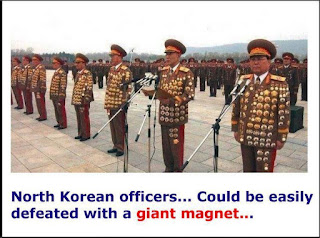 So he claims to be representing the widow of a dead North Korean general who was executed back in 2013. I'll admit, the first one that came to mind was the guy Little Kimmy (Kim Jong Un to his non existent friends, Dear Leader to the millions of people who have to say that) had executed by anti-air gun back in the day. No, it's not that guy. The real General Jang was executed by a mere firing squad. Thanks to his nephew by marriage, the cranky short guy with the bad hair cut who has a habit of killing relatives he doesn't like. Watch out the rest of the family, because Little Kimmy hates everyone, including himself. 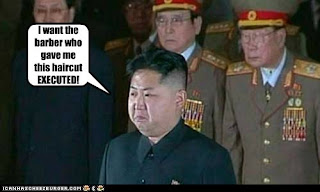 So Gil (can I call you Gil) wants me to help his client invest in my country. Really. Well, first, I'd have to double check, but I'm pretty sure my country has a whole lot of sanctions in place generally meaning no business at all with North Korea. So that's a no go, even if this were real, which it's not. Second, she's claiming that her late dearly departed husband squirreled away 150 million dollars and she wants to invest it on real estate outside of Hong Kong. Really.
150 million dollars.
In a country as utterly poverty ridden as North Korea. 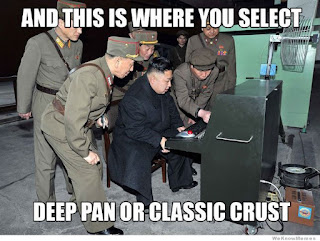 Oh, sure. And all I have to do for ten percent of that is answer that email address, get hold of Gil (and the gang of Russian arms dealers behind this scam) and send off... oh, all my banking information as a measure of trust. What's the worst that can possibly happen?
It astounds me that there are people this dumb out there who'll believe this crap, but there have to be, otherwise why do it? But I've seen too much of it, and I never buy it.
Wherever they are in Mother Russia, what they actually deserve is a Little Kimmy Special. Execution by anti-air gun. Come on, Little Kimmy, they're using your aunt's name against you. Are you going to let that stand?
Little Kimmy? Don't tell me you're crying because I called you Little Kimmy. 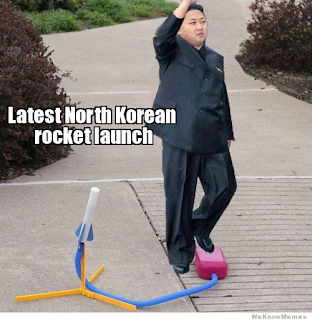