Breaking The Faith Of Leafs Nation 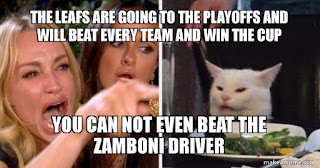 Team Gets Beaten By Zamboni Driver; Fans Have Collective Meltdown

Toronto (CP). If you tried telling a story like this in a movie, it would be dismissed as pure fantasy. And yet it happened last weekend. The Carolina Hurricanes came into town to play the Maple Leafs in a game last Saturday. What should have been a standard game became the stuff of legends, magic, one of those once in a lifetime moments… and yet more tears for Maple Leafs fans. At this point they should be used to it. 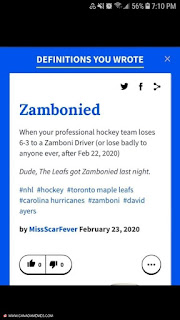 On February 22nd, both Carolina goaltenders were injured during the game. Thus began what would be a memory for the ages. David Ayres, a forty two year old Zamboni driver for Toronto and practice goaltender for the Leafs and their minor league affiliate the Marlies, was enlisted as an emergency goaltender. This is not unheard of in hockey, but a rare thing. But in this case, he was being enlisted to play goal for the other team. 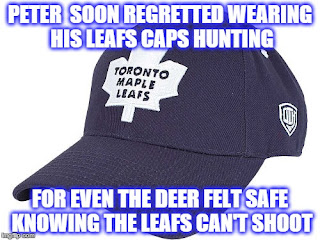 And play he did. Ayres became the first emergency back-up goalie to record a win in the history of the NHL, playing nearly half the game, stopping eight of ten shots made on him while the Hurricanes won the game 6-3. In the aftermath, Ayres has been the talk of the hockey world for the accomplishment, enjoying the attention. Hockey commentators have been talking about the improbability of the feat. Beer league players have been buzzing, the general tone of the talk being, ‘well if he can do it, why can’t we?’ Hurricane fans have lauded Ayres.

And Leafs Nation? They’re presently in a state of denial, despair, and heartbreak. 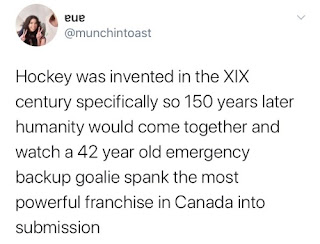 “It’s sad to see,” Toronto psychologist Gareth Eddings remarked this week. “You have generations of people brainwashed to believe that this team will win the Cup again sometime soon. When it hasn’t happened since 1967. And year after year, the team screws up and blows it and gets kicked out of the playoffs in some humiliating way. That’s assuming they even make the playoffs. And each year it happens, the anguish, the tears, the pleading with God… it all repeats itself. Some of them come to therapy. Others pour out their grief to their bartenders. But none of them ever learn from it, because October comes along, and there they are, confident that this is going to be their year. I keep trying to tell them, this year is never going to be their year.” 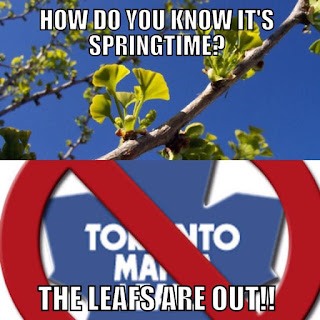 The doctor sighed before continuing. “It’s a clinical condition, unfortunately. MapleLeafitis Delusionitis is the term. There’s no cure for it. All we can do is try to catch the kids early before their parents indoctrinate them into the cult. It’s sad, really. You try to get people to see sense, but in so many ways, they never will. Very sad indeed. And now this? In some ways this is even more painful than what happened in some of the playoffs of recent years. I mean, honestly, if these guys can’t beat their own Zamboni driver, what business do they have in any arena? Personally, at this point, I think a pee wee league of six year olds could beat the Leafs.” 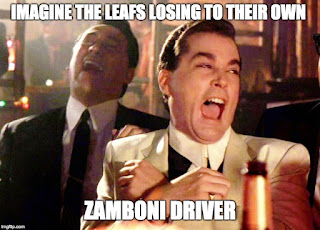 While there haven’t been any threats or accusations of treason against Ayres by fans, the fact that he beat their team rankles with the fans. “It’s not fair!” one unnamed fan told this reporter outside the Scotiabank Arena in Toronto. “We bleed white and blue! You hear me? We bleed it! We give this team everything, year in, year out, and all we want is the ****in’ Cup! We want the parade! We want to ****in’ see that we haven’t been wastin’ our ****in’ time! And year in and year out, we end up getting’ our hearts ****in’ broken! And this??? Our own Zamboni driver? They can’t get sixty seven goals past him? Come on, boys! What’s your ****in’ problem?" 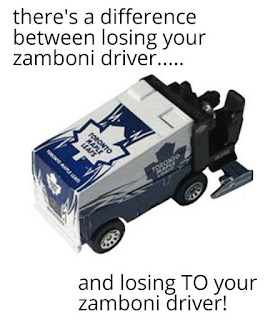 The man seemed particularly agitated, though that may be quite common for Leafs fans at the moment. He paused for a few moments, spoke more quietly, his eyes red. Tears? Alcohol? A mix of both? “It just…. It breaks your ****in’ heart, man. Breaks the heart. Is it too much to ask for one more Leafs Cup before I die? Does God hate us that much? No! It can’t be! So all I can think is there must be some great big conspiracy out there. I haven’t got that ****in’ conspiracy figured out, but it’s out there. And it means our boys aren’t gonna win the Cup. And that just breaks my heart. Well, either I can wallow in this, and believe me, I have. I’ve been ****in’ drinkin’ myself into a ****in’ stupor every night since Black Saturday. Or I can rise above it. Right here, right now.” 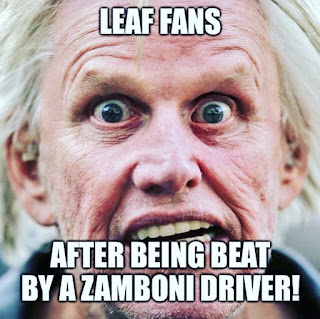 This reporter wondered, just for a moment, if the fan might just come to terms with the reality that he had wasted years of his life cheering on a team that would consistently let him down. The moment passed, as the fan carried on. “The Leafs need to sign me up as centre, right now. I’ll show ‘em what it means to win. Harry! Jack! Tell this ****er how ****in’ good I am playing bar league hockey!”

For the last word on the matter, we turn to the Almighty, God Herself. “I know, I know, I hear all the prayers from Leafs fans. And as much as it might lift their burdens to allow a Leafs cup, I simply can’t and won’t do that. Part of having free will means making foolish decisions. Like rooting for the Leafs. I’ll be perfectly honest, because being honest is a God thing to do. I’ve made it very clear down through history… that I don’t hate. Though there is an exception. I hate the Leafs.” 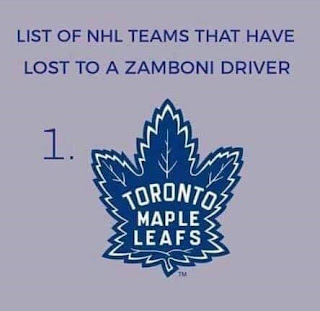