The Anguish Of Leafs Nation 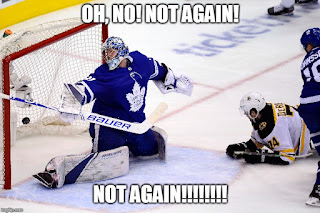 Hockey Fans Left Devastated, Deluded, Beyond Hope After Their Team Blows It Again

Toronto (CP) The city is often referred to as the centre of the universe, at least by its inhabitants. The fans of its NHL team certainly think so. Toronto, aka the Big Smoke, is reeling from yet another playoff failure by the Toronto Maple Leafs. On Tuesday night, the Boston Bruins sent the Leafs packing in Game Seven of the first round of the Stanley Cup playoffs. Again. The Bruins have often been the bane of the Leafs at playoff time in recent years. Last year the result was the same. And of course there’s the infamous 2013 series in which the Leafs completely collapsed in the last game and broke hearts of Leafs Nation yet again. 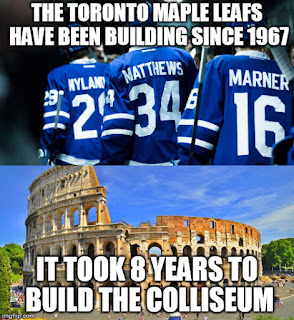 Toronto psychologist Gareth Eddings commented on the turn of events once again to this reporter. “You would think that people would learn from past failures and stop investing themselves in a team that keeps letting them down, but no,” Eddings ruefully noted. “It’s generations of mass delusion, passed down from fathers to sons, mothers to daughters. A blind devotion to a team that keeps screwing up when it really counts. Oh, this year the fans will, once they come out of the denial stage, come up with excuses. They might blame it on that temperamental Kadri fellow getting suspended for losing control. Each year the excuse is different. The result is the same. Screw ups after screw ups and ‘wait until next year.’ But there’s never going to be a next year. Because next year will be the same.” 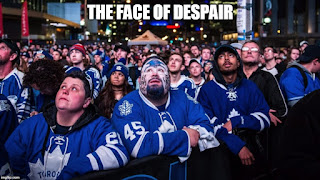 Eddings shrugged. “From a psychological perspective it is fascinating to watch. You see the denial, the depression, the anger, the bargaining, and finally acceptance. Well, for some of them the acceptance never comes. And then over the course of the summer, one by one, they forget how much pain the team caused them last spring, and sure enough, they’re getting their jerseys out, painting their faces blue and white, making up signs proclaiming their devotion, and getting themselves worked up yet again that surely this will be their year. The denial comes right back just in time for the opening of the season, as if last year’s horrible ending never happened.  We call it MapleLeafitis Delusionitis. Unfortunately it’s incurable.” 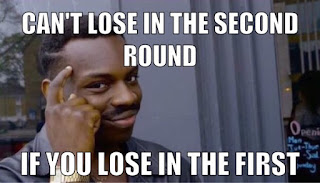 Local sports media in Toronto, having had seen their biggest annual focus blow it again, have retreated into fallback mode. With no other Canadian team left in the playoffs, they are investing their time into the Toronto Raptors, still in the NBA playoffs, and then the Toronto Blue Jays, having had just started up the baseball season. “It’s like this,” one of the local station reporters admitted, wanting their name kept private. “Toronto fans demand Leafs coverage. But once there are no Leafs playing anymore, what do we do? Follow them around on the golf courses until September? So the only thing we can do is barely mention the playoffs, maybe a five second bit at the end of the sportscast. We’ve gotta shift over to other local sports and hype the crap out of them until September when Leafs Mania starts up again.” 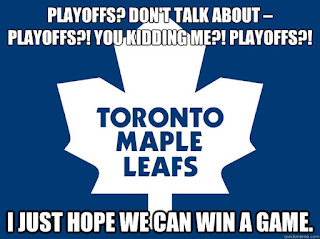 The fans themselves were visibly crushed by the end of Game Seven, in which the Leafs were beaten up by the Bruins with a final score of 5-1. In the three days since, for some of them the drinking hasn’t stopped. Workplaces in Toronto report heightened absenteeism and signs of despair. Some of the fans haven’t gotten up out of being curled in the fetal position for days on end, crying endlessly. Fights broke out in bars on Tuesday night. Temper tantrums were thrown. Letters to the editor were written with the perpetual question: “why?” 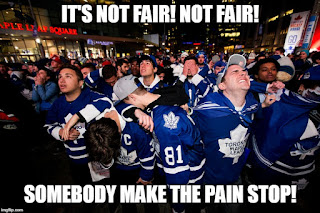 Why indeed. A question that plagues many of them. “It’s not fair!” an unnamed fan complained in the early hours of Wednesday outside a bar near Maple Leaf Square in Toronto, thoroughly drunk. “That Cup belongs to us! To Toronto! To the Leafs! There’s this big ****in’ conspiracy, man! They’re out to keep the rightful ****in’ owners of the ****in’ Stanley Cup from havin’ it! It belongs to us, and those mother****ers won’t admit it and just give it to us. Every other team should just ****in’ forfeit every playoff for the next century to make up for the bad ****in’ way our boys have been treated. Right, boys? Harry! Jack! You two tell this mother****er I’m right!” 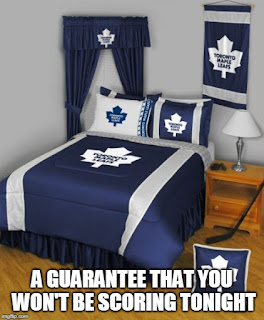 What’s next for the team? Nazem Kadri, having had been suspended for the remainder of the first round after a cross check on Boston player Jake DeBrusk, has been shouldering some of the blame for this year’s catastrophe, and has been tight lipped. Has Kadri played his last game as a Maple Leaf? Is upper management thinking he’s not worth the trouble of having around? Other players are busy clearing out lockers for the summer and talking about all the golf they need to get to. “We should have gotten to it two weeks ago,” right winger Connor Brown admitted. “I mean, golf’s important when you’re a Leaf, and we have a lot of catching up to do. Well, next year will come, and maybe we’ll do better. Or maybe we’ll screw it up when it counts the most. Oh, hell, there is no maybe about it. We will screw up when it counts the most. Wait a minute, you’re not quoting me, are you?” 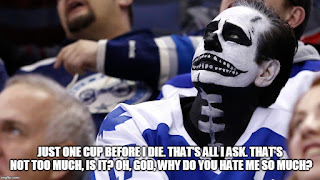 At Maple Leafs Square outside the downtown arena, the area remains the site of a vigil, of sad Leafs fans laying wreaths and flowers in commemoration of the 2018-19 season. They share hugs and tears, asking each other when it all went wrong. And some have already dipped back into next season’s delusions. “Next year!” one fan predicted as he left, wearing a team jersey with John Tavares’ name and number on it. “Next year we’ll get it back again! Leafs Nation, baby!  Yeaaaaaaahhhhhhhh!” 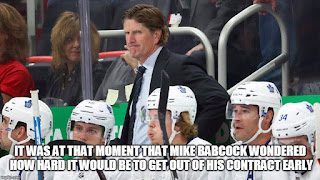