The Internet Scammers Versus Team Cancer 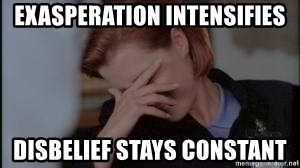 You would think at this point that they might take a hint. That they might go away. That they might do the universe a huge favour and take a long walk off a short pier. But no. Despite my ridiculing them at every chance I get, the internet spammers and scammers keep trying to get comments posted to peddle their crap, or send emails with the usual advance fee scam set up. Despite my telling them to go to hell, or using even more colourful language, they just don't get it. I've got a number of these obvious advance fee emails in my junk email at the moment. How many of them I'll use for posts like this, I don't know. Let's start with this one. 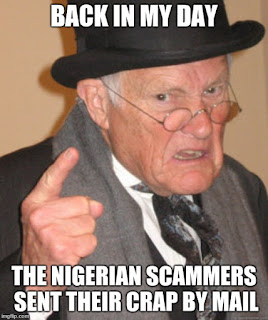 My name is  Mrs.Jennifer Spanier from United States,a widow suffering from
Breast Cancer and Stroke, which denied me a child as a result,i may
not last till the next two months according to my doctor report.I'm
married to late Pastor James Spanier, and we were married for many
years without any  child before his death. I'm 68 years old woman. I
have some funds i inherited from my late husband the sum of(5.8
million dollars) which i needed a very honest and God fearing person
who will claim the funds from the bank and use the funds for work of
God Affairs like; donation in the house of God,propagating the good
news of God and to endeavor God worshiping place and help
less-privileged. I found your profile and i decided to contact you for
the donation work of God.

I don't need any telephone communication in this regards because of my
health according to my doctor report, please if you would be able to
use the funds for the work of God as i stated ,contact me back so i
will lead you to Ally Bank  Limited  International in Washington DC
where this funds was deposited by my late husband Pastor Christopher
Deon, for you to retrieve the funds in my name as the next of kin.

I will stop here until i hear from you.

Always pray for my health.

May God bless you In Jesus name Amen!!! 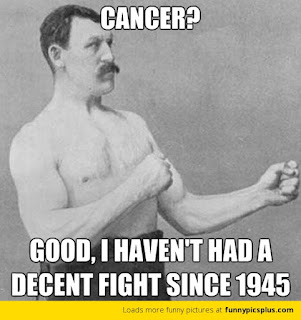 Ah, the usual sob story. The usual religious and faithful angle. The spacing angles. The capitalized words that don't need it, and the words that do need a capital letter and don't have it (honestly, you'd think how hard can it be to capitalize I?). The claim of being a widow who's sick without children and wanting someone to carry on the good work. Somehow the widow claims that her husband, a minister, left her 5.8 million bucks. Was this minister a televangelist? Because that's the only kind of minister with a whole ton of money. Money that they've gotten by fleecing their television audience of spare money, in and out, preaching the prosperity gospel and all that. Incidentally, as an aside, it's the televangelist who I hold as the ultimate example of hypocrisy and self righteousness, and a pretty good reason why I'm not on good terms with organized religion. 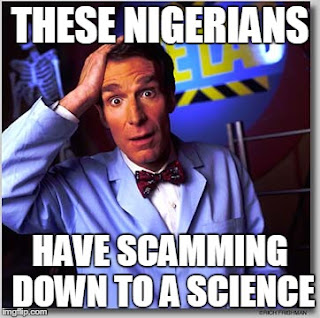 She says she wants me to do "God Affairs" with this money that she claims she wants to pass onto me. The usual nonsense: spreading the good word, helping the needy (the needy being whoever the hell is at the other end of this long chain of email addresses and who's hoping to score a few thousand bucks in advance fees from the poor sucker who's dumb enough to buy into this). She claims that  she found my profile and decided to contact me for "the donation work of God".

I see. And what from my profile makes her think I'd be ideal?

I mean, I've got less of a missionary world view and more of a Loki world view. 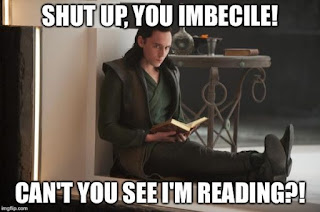 She says she's not reachable by phone because of her "health according to my doctor report"- to which I wonder what kind of doctor is keeping someone off a telephone? She urges me to contact her to "use the funds to do the work of God as i stated" (to which again I say, I'm a Loki). And she wants to get this all sorted by Ally Bank Limited International in Washington. Well, if you Google that, you come up with two links straight off the top, both of which are about scams.

Actually the whole concept, even at their website, makes Ally Bank look like a scam. What kind of bank doesn't have branches?

That's beside the point. Because this grifter can't even keep her story straight. 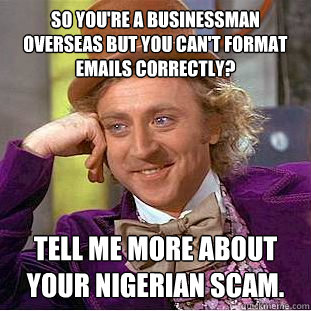 She starts off with the story about her late husband, the obscenely rich minister James Spanier. And then she ends it with saying she inherited from her late husband Pastor Christopher Deon. Also a minister. Also rich. Well, they would be if they existed, which they do not.

Which one is it, Scamming Widow? James or Christopher?

Or is it both?

Were you a black widow killing off her preacher husbands?

Was this a polyandrous marriage? Threesomes? 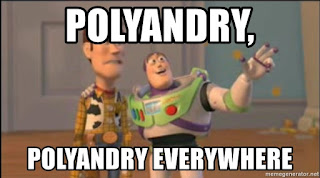 Nice try, Scamming Widow. But if you're too stupid (which you are) to even keep your scam story straight, you deserve being ridiculed and treated with the contempt I'm giving you. Maybe in that list of hundreds of thousands of emails you send this same story to, someone's dumb enough to buy the story and send off a thousand bucks in the advance fee that is inevitable in these sort of things. Or two thousand. Or however much until they finally realize they got hustled.

But that's not the case here.

And no, I won't pray for your health.

I will conclude by saying it's hilarious invoking God's name while carrying out a scam. If you don't be careful, She might decide to actually give you cancer. In which case I'm rooting for Team Cancer. 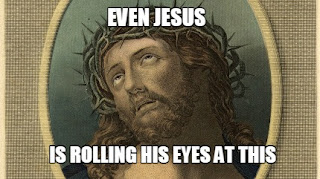 Posted by William Kendall at 4:58 PM