The Kidnapping Of Fred Savage 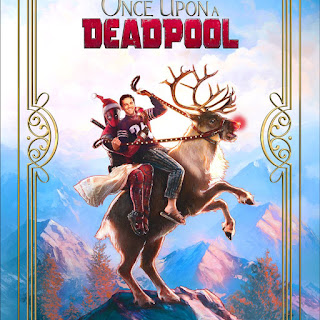 “You’re Marvel licensed by Fox. It’s like if the Beatles were produced by Nickelback. It’s music, but it sucks.” ~ Fred
“You were nicer as a kid!” ~ Deadpool 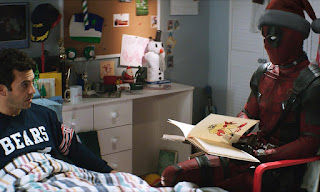 The two Deadpool movies have turned the comic book adaptation on their heads, giving Ryan Reynolds a chance to exercise his inner snark in violent, bloody, and hilarious ways in films that have been R-rated for a reason. Following the adventures of an X-Men connected superpowered mercenary with loose scruples, a face that looks like it’s been sandpapered, and an odd healing factor allowing him to come back from anything, the movies have been popular with audiences. Studios tried to persuade the creative team in the beginning to do a more family friendly film, but the material pretty much required the R rating. Until star Reynolds agreed to do a re-edited version of the second film with two conditions- a charitable cause and the kidnapping of a beloved former child star. 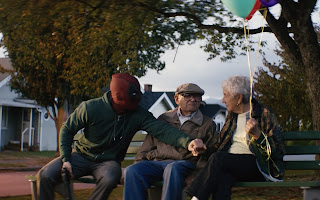 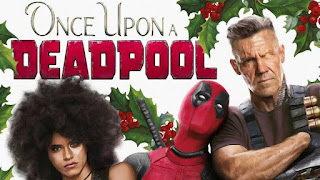 Once Upon A Deadpool tells the story of the second film, in which Wade Wilson (Reynolds) loses his lady love Vanessa (Morena Baccarin), feels sorry for himself, hangs around with some of the X-Men, gets tossed into a prison where his powers are negated. He falls in with Russell (Julian Dennison), a young mutant who’s a troubled and abused kid, but fated to become a monster in the future. And from that future, Cable (Josh Brolin) comes to kill Russell. The story, reedited for language and some of that aforementioned violence, gets new scenes in the form of a subversive and hilarious framing sequence that pops up throughout the movie: Deadpool breaking through the Fourth Wall, kidnapping Fred Savage (playing himself), and telling him the more or less family friendly version of the film, all while the two bicker and spar with each other. 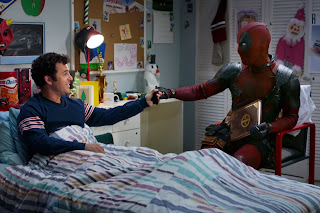 Back when the sequel was released, Reynolds suggested the framing sequence to writers Rhett Reese and Paul Wernick- a parody of The Princess Bride and its narration sequences in which Peter Falk`s grandfather reads his grandson (Savage) the story while avoiding those parts that might be too scary for a youngster. The subversive element (in parodying a film that was already subversive in its own way in skewering fairy tales) is taking the same young actor and putting him in the same position as a grown adult, and as himself, not as the character. Thus scenes were written for Reynolds and Savage, the latter agreed to do the role, and director David Leitch returned to film the scenes that were added into the film. 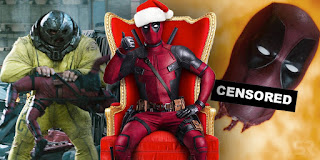 Much of the story remains as is, changed only by judicious re-edits. What is new here are the narrative sequences that Leitch has filmed, and the attention to detail in these scenes brought a frequent smile to my face. The bedroom that Fred Savage finds himself looks very much like the childhood bedroom of The Princess Bride, including many of the items around the room. This includes the fact that he’s wearing the same shirt that his character wore in that film (not the same shirt, he’d have outgrown it, but the same style of Chicago Bears fan shirt). Some of the camera takes feel the same too, as Deadpool, taking the place of Peter Falk, bickers and spars with Fred while retelling the story. 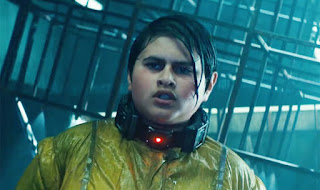 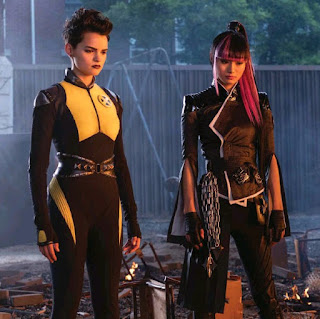 The cast of the main story remains as they already were in the first film. Stefan Kapicic voices the calm and resolute Colossus, trying to coax Wade into being a better human being. Brianna Hildebrand returns as the teen mutant with an attitude and eye roll to match, Negasonic Teenage Warhead, promoted to X-Men status. Her girlfriend Yukio is played by Shioli Kutsuna, still as cheerfully happy as ever. Julian Dennison as Russell elicits both horror and sympathy as the young mutant has dealt with a life of abuse from a horrible schoolmaster and is on the edge of travelling down a dark path. 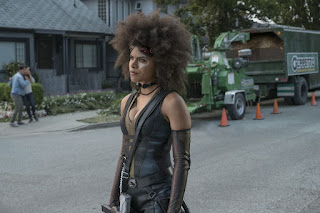 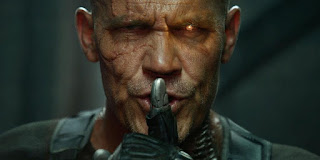 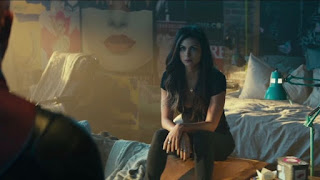 Zazie Beetz inhabits the role of Domino, whose abilities involve the altering of probabilities, a luck power that keeps her alive in situations where anyone else would die. She plays the part with sass, confidence, and the right amount of attitude. Josh Brolin remains as cranky and gruff as ever, looking older than he usually does as the weathered future warrior Cable, who comes back in time to save his family by killing the man who killed them before he gets a chance to become that man. Cable is humourless and bleak at times, but possessed of a moral code. Morena Baccarin as Wade’s lover Vanessa provides more of a spiritual presence through the film, coaxing Wade along the path he has to follow.

What makes this re-edit work (as opposed to, say, an American cable version with their own puritanical edits) is the framing sequence, which maintains the anarchic and Fourth Wall breaking tone of the two movies. And so it’s the two actors involved in that which must be touched upon. Fred Savage as a child actor was known for The Princess Bride and a long running television show, The Wonder Years. In that series he played Kevin Arnold, a boy growing up in the late 60s and early 70s. It established him as a child star, and the film plays off of that as well. Savage is playing himself, at least a version of himself, a grown adult who’s aware that he played a role in The Princess Bride and aware that he’s being held captive by a member of the not quite Marvel cinematic universe (licensed to Fox, so it’s not really true Marvel cinematic universe, something he has no problem pointing out). Savage seems to have a blast subverting himself as he bickers and banters with Wade and breaks the Fourth Wall. He brings good comic timing to the film as he spars with the Merc With A Mouth. Though I never saw the television series, one of the things that passed through my mind watching the film was Savage helming an update with the series- with Kevin Arnold having gone from an innocent kid to an ethically challenged arms dealer in the late 90s. 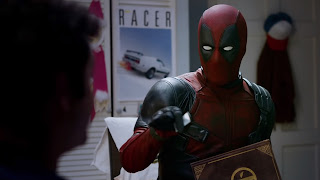 Reynolds maintains the snarky, reality challenged tone of Deadpool in how he plays the part, both in the main story and in the narrative framing. The character is sarcastic in a way that not even Spider-Man ever was, self-aware that he’s in a comic book, or a film. He can be thoughtless and careless and rarely thinks things through, preferring to live life as a constant improvisation. And yet he has a conscience. Reynolds plays these contrasting elements in his character, and is clearly having a ball playing the part. The narrative framing adds onto the anarchy, as Wade finds himself telling a toned down version of the film to the supposed ‘childlike innocence’ of a kid he remembered, all while feeling genuinely hurt that the kid has grown up and has become snarky in his own right. Reynolds subverts his character while also poking fun at the grandfather role in The Princess Bride, and the energy and dynamic between the two actors in these scenes as the film goes along gives the film its own gleefully chaotic sense of purpose, making it more than a re-edited and toned down version you would see on cable (AMC, I’m looking at you). 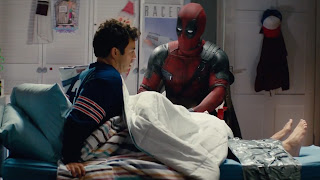 Is Once Upon A Deadpool a Christmas movie? Well, no, it just happens to be released around this time of year, and there are bits and pieces of the film that give a nod towards the season. Yes, it has a man in red who’s got a list that he’s checking twice (but he’s less forgiving than the jolly old elf and in better shape). It re-edits the second film and does so in a way that doesn’t sacrifice the main tone of the film. But where it succeeds is subverting what is already subversive- The Princess Bride- with its narrative sequences. The subversion is respectful, oddly- one gets the sense that Reynolds, Leitch, and the writers are big fans of that movie. Reynolds and Savage, in the way they work off each other in those sequences, are a treat to watch, trading insults and one liners as they go along. That makes this film a welcome early Christmas present. 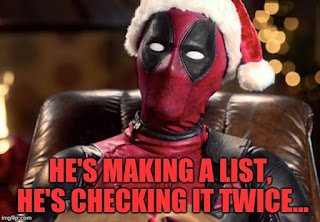