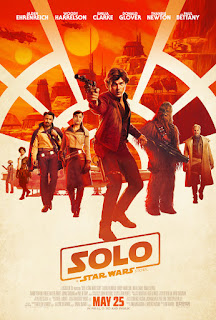 “Let me give you some advice. Assume that everyone will betray you, and you will never be disappointed.” ~ Tobias

“You look good. Little rough around the edges, but good.” ~ Qi’ra

“I heard a rumour about you, and I wanted to know if it was true.” ~ Han Solo
“Everything about me is true.” ~ Lando Calrissian 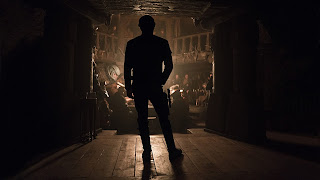 The ever expanding Star Wars universe sees a new installment in the companion films that started with Rogue One. The new film Solo is now out, set a few years before the events of A New Hope, and tells the origin story of the scoundrel and smuggler Han Solo, including his first meetings with friends Chewbacca and Lando Calrissian, in a story that feels much like a heist film. Director Ron Howard capably handles a project from screenwriting father and son team Lawrence and Jonathan Kasdan, in a project that has had some bumps along the way.

We first meet a young Corellian named Han (Alden Ehrenreich) and his lover Qi’ra (Emilia Clarke) seeking a way off the shipbuilding world, and their attempt doesn’t go according to plan. Han winds up in the Imperial forces as a cadet, given a surname fitting his character, and three years later finds himself expelled from the flight academy for insubordination (typical of the man he’s becoming). He encounters a criminal, Tobias Beckett (Woody Harrelson), comes across a Wookie, Chewbacca (Joonas Suotamo), and a smuggler, Lando Calrissian (Donald Glover), among others, and is caught up in a heist scheme involving minerals and a criminal syndicate led by Dryden Vos (Paul Bettany). 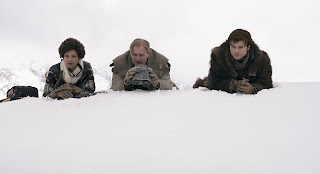 The idea of a young Han Solo film had been around before the Lucasfilm deal that saw the Star Wars brand sold to Disney. Writer and director Lawrence Kasdan, who’s had a hand in a substantial part of the cosmic epic as a co-writer in films like The Empire Strikes Back, Return Of The Jedi, The Force Awakens, and The Last Jedi, was attached early on, and he and his son Jonathan have developed the idea over time. Their script, crafted to feel like a heist film, mixed with sci-fi fantasy and action, carries over the influences of the Star Wars universe while standing out well on its own.

The script weaves in little tidbits such as the formations of friendships between the three main characters, Han’s roots, the ownership of the Millennium Falcon, and ties to other elements of the established continuity. There are hints of a building rebellion, an established Imperial military that is still finding its footing, and even a few surprises along the way. This being a heist film, the story brings sleight of hand and backstabbing to the equation, along with a healthy dose of cynicism that explains a lot about the man we first meet in a seedy bar on Tatooine. Characters are invested with a sardonic world view at times, charm at others, and wistfulness at yet other times. 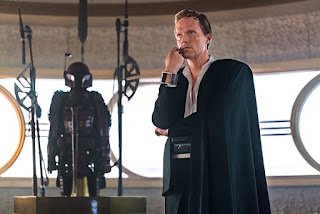 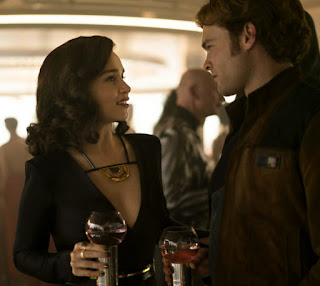 The production of the film has a complicated history. Directors Phil Lord and Christopher Miller were originally attached to the project, had gotten filming done, but were removed from the project by Lucasfilm executives over creative differences. Ron Howard, who’s spent years as a well established director, was brought in to take over the project, and the finished product has a bit of a jolted feel as a result- some of it is still Lord and Miller, but most of it’s Howard, and the difference in style can feel a bit disjointed. 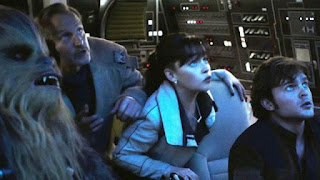 That said, however, the film works well- Howard has a talent for balancing characterization of actors with a big story, and that certainly shows itself here. Lucasfilm’s production crew handles everything well- the creation of sets and CGI for ships and locations all fits into the previously established Star Wars continuity, albeit one that’s decidedly on the seedier side of the galaxy. Special effects enhance as opposed to overwhelm (something that was problematic during George Lucas’ prequel trilogy), and action sequences unfold in a way that allow you to keep track of the action. This is not a surprise, given that Howard’s shown himself to be adept at that before. The score incorporates themes from John Williams, but it’s the under appreciated John Powell who composes the bulk of the score and takes things in new directions for the franchise. 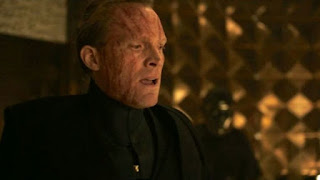 The cast as assembled is an impressive one, well suited to their roles. Paul Bettany has made a career out of playing character roles, people who are on the side of right and the side of wrong. Here he plays someone who is definitely on the side of wrong. He was brought in during Howard’s reshoots, as the previously cast actor was not available for reshoots. His character, Dryden Vos, is a ruthless sort of crime lord (aren’t they all?), and Bettany gives the character a menacing energy, chewing the scenery as he goes along.

Woody Harrelson first made a reputation for himself as the simpleton bartender Woody on Cheers, but has been known to play characters with a dangerous, unpredictable quality in film roles. Such is the case with his take on Tobias Beckett, the capable leader of a rag tag group of crooks for hire. He’s the sort who plays his cards close to the vest, keeps his agenda hidden, and goes through life pretty much not trusting anyone. Which makes his influence as a mentor to Han pretty much a good reason Han turns out the way he does. It’s noted that the character is influenced by Long John Silver from Treasure Island, and that fits with Harrelson’s performance. Thandie Newton appears as his wife Val, a member of his gang. She’s an actress I’ve liked in roles before, and her take on the role is that of a resourceful and reliable crook, with few scruples. The actress makes her compelling to watch.

Droids have long been a part of the Star Wars universe, both in terms of background and in terms of central characters. Solo gives us a new one, voiced by a British actress. Phoebe Waller-Bridge gives the voice performance for the droid L3-37, physically a CGI presence as a character who nonetheless merges into the environment with the other actors. The droid is a companion to Lando Calrissian, and proves to be sardonic but resourceful, capable of improvising in a given situation. The actress gives her vocal take on the role a hint of humour and irony, making this droid a good deal more welcome than, oh, that pesky protocol droid from the main movies who worries far too much. 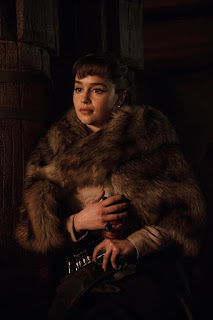 While the core films established Han and Leia as a couple, it would have been easy for the smuggler to have had other relationships long before he became a Rebel. The proverbial one that got away appears here in the form of Qi’ra, played by Emilia Clarke, from Game Of Thrones, which I’ve never seen. I’ve only seen the actress in that last Terminator film, and this is a different kind of role for her. Her character grew up with Han, in a rough environment, and they were childhood friends, partners in crime, with a dash of romantic spark between them. Her performance is sympathetic and nuanced, a woman fighting to stay alive in environments where a mistake can be lethal. The character is likable and self reliant, and she’s got chemistry with Ehrenreich. I’d like to see more from her in other roles. 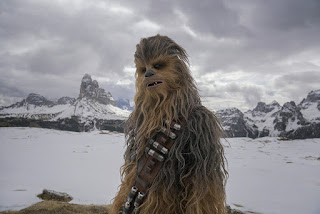 Chewbacca has been a central character in the Star Wars mythos from the beginning, appearing in the original trilogy, the final film of the prequel trilogy, and the new trilogy as well. For much of that time he had been played by Peter Mayhew, but health issues finally had the actor step down from the role and turn it over to Joonas Suotamo, a Finnish actor and former basketball player who had started doubling for Mayhew in The Force Awakens and assumed the role in The Last Jedi. Being a Wookie, Chewbacca can live for hundreds of years, and we learn he’s a spry 190 years old when he first meets Han, which explains why he still has no grey in his fur in the current trilogy. The character has always been a fierce but loyal ally, a walking mountain of fur with a temper who acts for the greater good, and Suotamo inhabits the role (with a lot of recorded growls and grunts from various animals making up his vocalizations, which Han understands perfectly) in just the right way. The film quickly establishes the friendship and trust between the two characters as they meet for the first time. 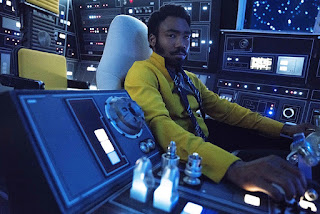 Donald Glover gets a lot to do as Lando Calrissian, the suave, smooth talking swindler played in the original trilogy by Billy Dee Williams (I wonder if we can get a return from the actor in the last of the current trilogy?). Here Lando is younger, still years away from taking on the responsibilities of administering Cloud City and ending up in the Rebellion. He’s a smuggler on the rise, but the charm of the man is well established, as is his tendency to talk and think his way out of a difficult situation. Glover gives the character an effortless grace that fits in with what we already know about the man, while pointing the way towards his future. I like the bantering energy between his Lando and Han as the two smugglers get to know each other and build a friendship, albeit a friendship between scoundrels.

Alden Ehrenreich has done a lot of roles over the last few years for big name directors- Francis Ford Coppolla, Warren Beatty, and the Coen Brothers. He got the role as Han Solo over several other actors, and gives us a new take on Harrison Ford’s well established character. Han is living something of a rough life when we first meet him, but there are hints of the idealist in him. He has dreams for the future, dreams that hit hard against the reality of a galaxy where the Empire rules. Defiance and insubordination fit the character, both in this story and in where he’ll go down the line, and the film’s story gives him reasons to become more of a cynic, more of a scoundrel, as he falls into the life of a crook. While he might be a crook, there are lines he doesn’t cross, and the actor plays to that, giving us a believable take on a starting out on the road smuggler, a few years away from crossing paths with destiny. 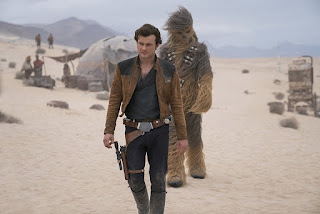 Solo is a worthwhile addition to the Star Wars mythos, inhabiting the continuity of the saga and telling the origin story of some of its most compelling characters (sorry, Luke, but somehow Moisture Farm Boy: A Star Wars Story doesn’t sound likely to be greenlit anytime soon). It has a fun energy, a good sense of humour, and is at heart a heist film populated by crooks and cutthroats, seeking the easy score in a galaxy where the darkness is rising. The cast is well suited to their roles, and the film overall, despite being a bit uneven, adds a new chapter to its franchise. 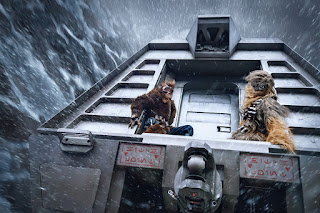