Fandom Unleashed In The Capital

As I have just started a series in my photoblog on our Tulip Festival, I'm posting today here. Last weekend Ottawa saw its annual Comiccon, a three day event at the EY Centre for fans of comics, movies, television, sci fi, and much more. Celebrity guests and artists were on hand for meet and greet sessions and events over the weekend. Merchandise was on sale from exhibitors and craftspeople. And there were no shortage of those in costume, walking about. As for me, well, put me in a suit and I could get away with posing as Lex Luthor.

This Darth Vader was walking about with R2-D2. There was no sign of an annoying and worrisome protocol droid. 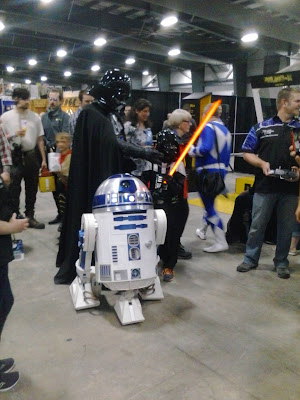 Among the exhibitors was a business called Sparx and Mace, which specializes in period cosplay clothing for women and men- corsets, lace, scarves, and items that might be considered a bit racy. 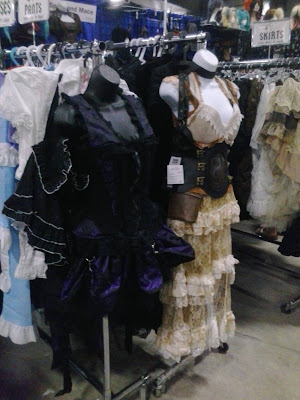 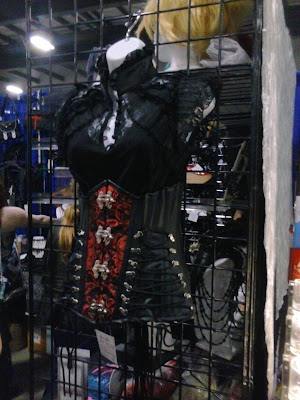 One of the cosplayers, with a zombie look. We'll see more of her in our final shot. 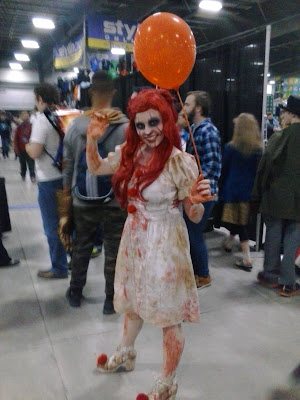 This sort of merchandise appealed to me. Among my purchases were comic book t-shirts and some prints from artist Geof Isherwood (an Avengers group shot, a solo Thor in stormy weather, and a dramatic Wonder Woman). I chatted with Mr. Isherwood, as well as Nick Bradshaw, another well established artist nearby. 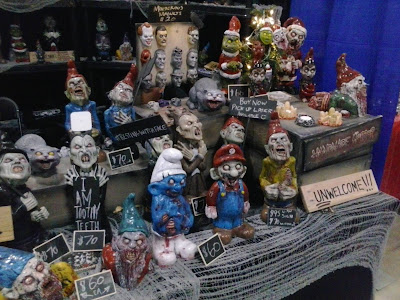 I liked this formidable armour, though I have no idea who the character is supposed to be. 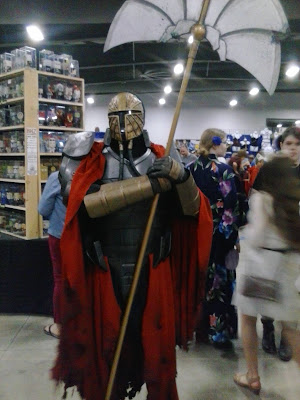 I took some perspective shots. The place was exceptionally busy, with people coming through. The EY Centre, located near the airport, is larger than our convention centre downtown, and someone I chatted with during the day noted that it's easier for exhibitors to load and unload here than it would be downtown. 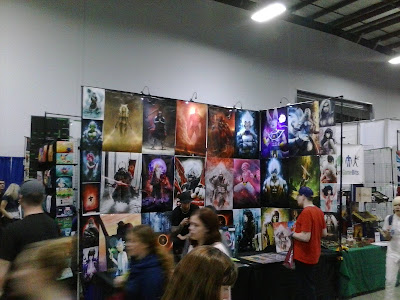 This vendor included some pillows in their wares. One guess as to why this drew my eye. 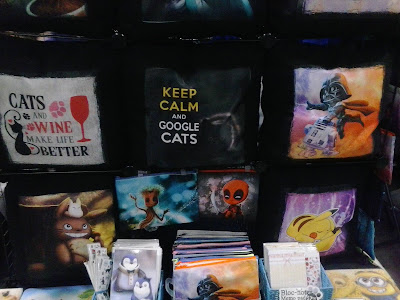 Among the cosplayers were plenty of Negans (including a woman) wielding barbed wire bats, a good many Deadpools and Spider-Men, more than a few Harley Quinns, and plenty of Star Wars related people. Ottawa has a local chapter of Star Wars cosplayers, the 501st Legion, and they had a specified area in the building. 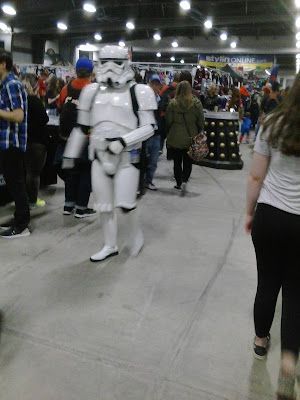 I believe this is a Doctor Who villain, but the whole franchise gets me a bit dazed and confused, so perhaps someone can verify that. 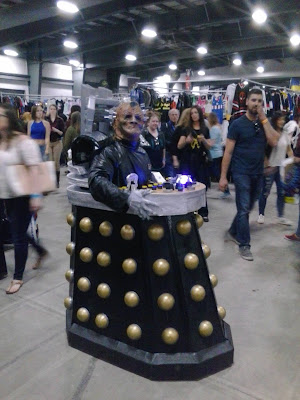 I stopped by this booth, for Wasteland Artisan, which specializes in handcrafted masks and accessories. 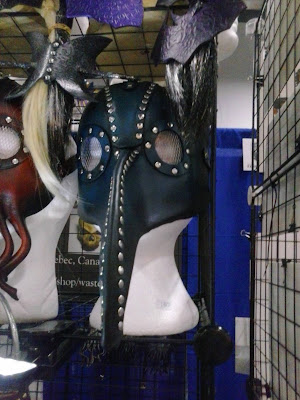 This trio caught my eye during my wanderings. Here we have Colossus with the silver skin, Professor Xavier in the wheelchair, and a young woman playing the part of Negasonic Teenage Warhead, all from the X-Men franchise. 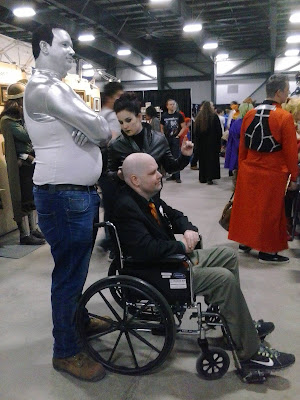 This wall caught my eye too. It was for a business specializing in makeup effects. 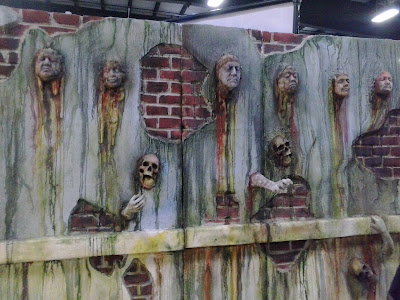 Two of our national museums here in the capital region had a shared booth, which makes sense as they are run together by the same organizational leadership. The Canadian Museum of History and the Canadian War Museum are presenting a pair of related exhibits beginning in June. Medieval Europe will be shown at the former, while the latter hosts an exhibit on Armour- from knights to superheroes. While the suit of armour in the background was stationary, the soldier and Iron Man were in fact cosplayers who were part of the booth. I'm looking forward to both of these exhibits and will be documenting them in the photoblog. 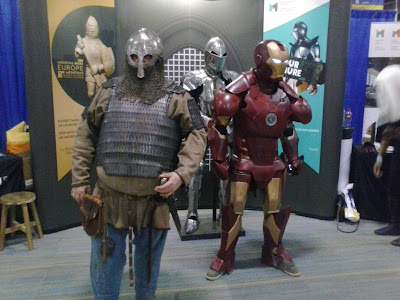 One of my favourite cosplayers of the event- this fellow was in costume as Groot, walking about on stilts, and when I caught him here, he had a t-shirt from the nearby shirt vendor with the only three words the character ever says in the Guardians of the Galaxy films. 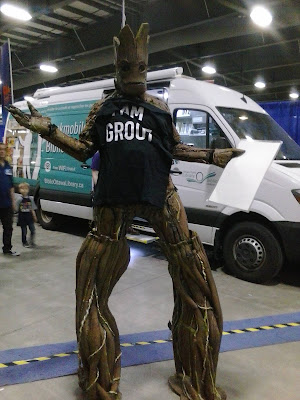 More cosplayers. I find it fascinating how much attention to detail these people pay to their costumes, and the enthusiasm is infectious. 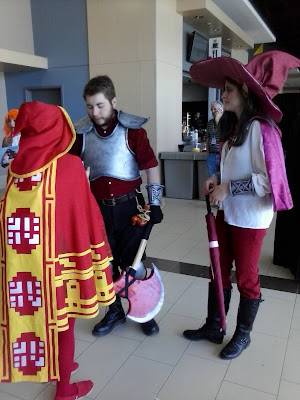 Out in the entry corridor, I photographed some more. The Dark Knight certainly fits the part. His companion... a bit of looking about suggests she was taking the part of She-Ra. 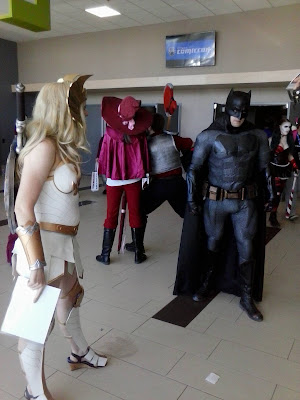 This robot costume really caught my eye. I had a chance to speak with the person in the costume a few minutes later and complimented her on the costume. 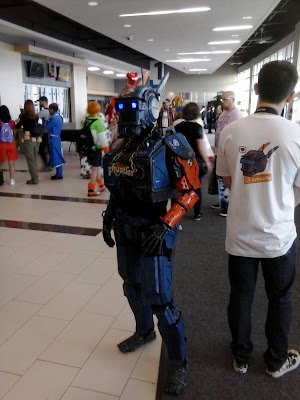 A zombie bride had quite a few onlookers gathered around. 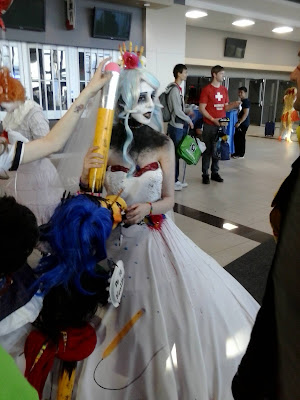 I liked the costume of this woman, playing Cruella De Vil. Aside from the smile (unthinkable in the original character), she definitely looks the part. She graciously held a pose for me. 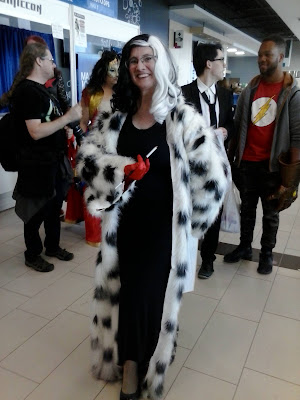 I finish off with this set of three women in different costumes posing for photographers. The last one includes our zombie from earlier in this post. If you get a chance to go to one of these conventions, take it. These are a whole lot of fun. 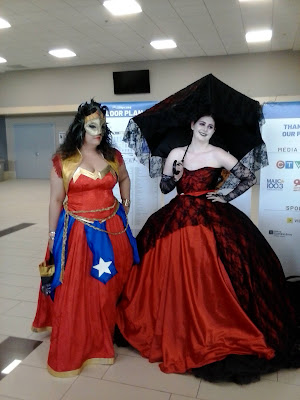 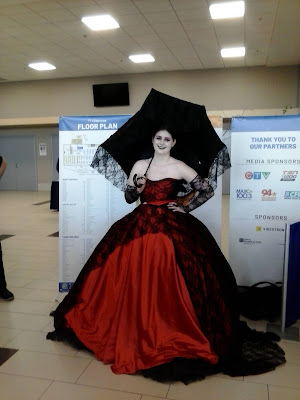 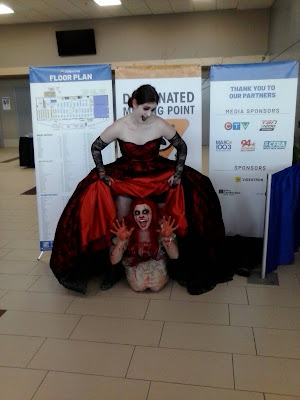